My wife attended, I did not.  This write-up is based on her notes from the meeting.

The meeting lasted about 2.5 hours.   (Maybe you want to listen to the meeting for yourself, if you have the time, because at some point in this, I got tired of doing the writeup and started skipping details.)  The Town will presumably have its audio recording posted shortly.  (Right now, if you click the apparent link for audio, you get a “network error”).    In the meantime, if you want to listen to the meeting, I’ve placed a copy of my wife’s recording at this this Google Drive link.

The meeting materials are on this Town of Vienna web page.  Apparently there was also a set of comments on the new version of (what used to be called) the Citizen’s Guide to Traffic Calming, but those comments were only available to Town Council, not to the public.

The meeting had two parts:

For those who want to listen to the meeting, the traffic calming section starts about 1:05 into the recording.

This part of the work session was due, I think, to Councilman Majdi’s various requests that the Town develop some systematic approach to dealing with issues in the Town right-of-way, including alleyways.   See Post #477 for details.  That request morphed into waiting for the Town Manager to provide an “after action” report on the Wawa tree-cutting incident and other right-of-way issues, to see how the Town might change its procedures to avoid these problems in the future.  This session was the presentation and discussion of those “after action” reports.

Issue:  MAC zoning requires that buildings be set back a minimum of 15′ from the curb of any side streets.  So, if you can move that curb farther toward the center of the road, you can build a bigger building.  This is exactly what happened at 380 Maple West, where (apparently) the developer talked someone in the Town bureaucracy into narrowing the Wade Hampton right-of-way from 36′ to 32′.  The developer then got that extra 4′ to build his building on.

While Department of Planning and Zoning staff did their best to downplay the value of that in prior meetings (to the point of presenting what I would call outright propaganda to Town Council), my best guess is that this little favor added about $1.3M to the value of the resulting building.  You can see my rough calculation of that in Post #301.  (More generally, see this post if you want to grasp just how self-serving the process for creating those MAC zoning rules was. )

In the end — with Sunrise instead of condos at 380 Maple West — the Town reverted to a 36′ right-of-way, and Sunrise voluntarily moved the building back the resulting 4′.  (The prior developer — the one who had wangled the 4′ reduction in the first place — would have done no such thing, which would have resulted in an 11′ setback when the Town restored the right-of-way to 36′.)

The Town bureaucracy stuck by the story that the narrowing of Wade Hampton was a public safety measure.  I.e., it was for traffic calming purposes.  And it made this block consistent with the next block, or something.

As I noted in Post #301, I’m pretty sure that the traffic studies showed an average speed of about 10 MPH on that block, so the “traffic calming” excuse is absurd on its face.  And the narrowing of that commercial block (directly adjacent to Maple) along with the planned restriping would have eliminated most of the on-street parking there, as detailed in Post #238 and Post #391.  So, whatever the Town did that for, it sure wasn’t a) for traffic calming, or b) to make life easier for the other users of that commercial block of Wade Hampton.

The Town did, at least, admit that the narrowing was done at the request of the developer.  At least, that’s what my wife’s notes say.  You’d have to listen to the tape to verify.

Town response:  I don’t think there was any one coherent response to preventing this from happening again.  Councilman Noble called for any changes in right-of-way to be highlighted in staff reports to the Town.  (Apparently, that may already be the rule, per the Town’s Public Infrastructure Manual.)   Councilman Potter noted that the original rationale for narrowing the road was faulty in any case.   Council members Majdi and Springsteen also brought up (e.g.) chances in the Town’s comprehensive plan to ensure functionality of various street segments, adequate truck turning radii, and so on. Issue:  See Post #424 for background.  The 5′ to 6′ tall transformers sit about a foot off the line of the sidewalk.  This runs contrary to the “MAC streetscape” appearance that the Town is trying to create.  More importantly, cars exiting the drive-through lane can’t see the sidewalk to their right, which creates a significant potential hazard for pedestrians and bicyclists on a walk-to-school route for Madison HS.  This was brought to the attention of the Transportation Safety Commission, and as a consequence the Town is asking Chick-fil-A to install a convex mirror so that drivers can see around those transformers (Post #518).

Town response: Those transformers are on private property.  Further, the Town does not ask for the “dry utility” plans as part of the site plan, and so the Town only became aware of those transformers at some point late in the planning/construction process.  (Apparently “dry utility” means any utility other than water and sewer.)  The Town asked for them to be moved, but at that point, they could only move them a foot or so.  Per the Town lawyer, the Town does not have any significant leverage with Dominion as to location and form for the transformers.  The Town has now changed its procedures to require the dry utility plans as part of the site plan for future construction.  Councilman Majdi followed up on that by asking about the site plan checklist (presumably to make sure that unobtrusive placement of the electric utility transformers was part of some overall checklist.) 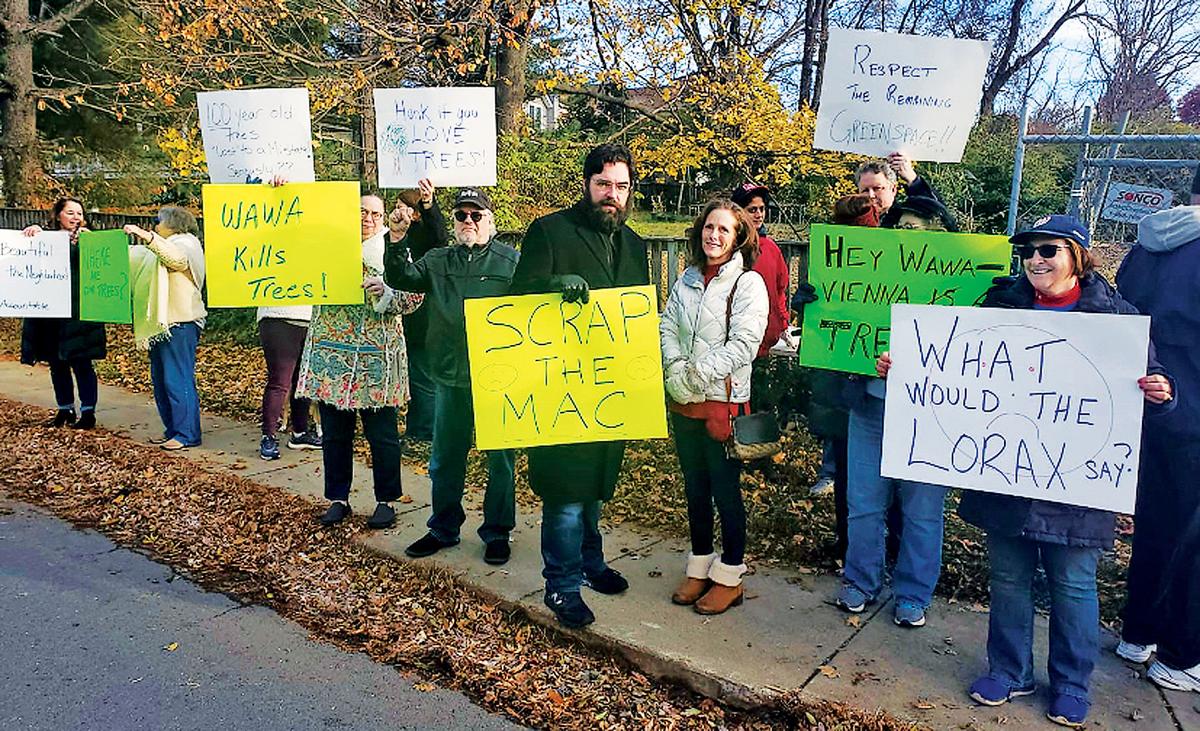 Issue:  See Post #467 for background. Wawa’s contractor clear-cut the Town alleyway that sits between the Wawa lot and the adjacent single-family home.   This was completely unexpected, as Wawa had made a point about not coming in and cutting down mature trees, and in fact specifically noted on their site plan that the mature silver maples on the Town’s right-of-way (alleyway) should be preserved.  I think it was the public outcry over cutting those trees down (Post #468 ) that provided much of the impetus to have for this public discussion of Town right-of-way issues.

My wife’s notes for the start of this section read “Nothing we didn’t already know”, so you can read the background postings to understand what the story appears to be.  In short, it was the Town’s new arborist who suggested cutting down the mature silver maples.  He was apparently unaware of the site plan instructions to retain those trees.

Town response:  The immediate response is that the the Town appears ready to pay for landscapers to install new plantings on the property of the abutting single-family home.  This is to make up for the loss of the mature Maples.

That said, Town staff managed to hit a pet peeve of mine, which is the assertion that greenery reduces noise transmission.  It doesn’t.  Landscapers commonly assert that it does, but that’s false.  See Post #453 for references.  The only material noise reduction the adjacent property owners will get will come from the solid vinyl fence that Wawa has agreed to install at the lot line.

In terms of changes in Town policy, the notes don’t show much.  The Town is thinking of extending the existing “tree bond” from one year to three years.  (A tree bond is an amount of money that a developer will forfeit if the tree in question isn’t alive and healthy at some point after construction has finished.)

Otherwise, you’ll have to listen to the meeting yourself to see if there are other changes in Town procedures to reduce the risk of this in the future.  As I understand it, because the Wawa was merely remodeling an existing building, they didn’t even have to file a complete site plan or landscaping plan.  They more-or-less did that as a courtesy.  So I’m not at all clear what controls the Town thinks it might have to prevent recurrence of an issue like this one.

Replacement for the Citizen’s Guide to Traffic Calming.

At this point, I’m running out of steam, trying to write all this up.  I’m just going to sketch a few notes, based on what my wife reported.  You can see the current guide here (.pdf).  You can find the new “Street Safety Guide” with the meeting materials for this work session.