It’s tough to say why, of all the things in that study, the Town decided that those two W&OD road crossings were a priority.  For sure, there was no formal cost-benefit or risk analysis done.  I think they just sort of liked the idea, and it was cheap to do.  So they’re going to do that, and that’ll be the tangible outcome of that study, along with filling in a right-turn lane where Mill and Church intersect.

This seems to have stirred up some interest in a W&OD bridge for the Mape Avenue/W&OD crossing in the Town of Vienna.  To be clear, we’re not getting a bridge there, and nobody is talking about paying for a bridge.  And in this post, I’m briefly going to explain why that is — why this was ignored in the Town’s Multimodal study, and will it will likely remain a low-priority issue.  My conclusion is that the stoplight we have now for the W&OD Maple Avenue crossing is probably good enough, given the size and cost of a bridge.

But other crossings have bridges …

Sure, but those crossings tended to be ones with significant problems and traffic, often where a new traffic light would not work, or where there are problems, despite a light, due to heavy traffic.

The closest large dedicated bridge on the W&OD is the Citizens’ Bridge in the People’s Republic of Falls Church.  This is where the W&OD trail crosses Route 7/Broad Street.  This bridge dates to 1992 or so.  Falls Church citizens agitated for a bridge because bicyclists and pedestrians were crossing Broad Street there, rather than walk/bike to the stoplight-controlled intersection at West Street. That bridge is an object lesson in the nature of bicycle and pedestrian traffic.  At the time, the bridge was lauded as an example of effective small-town government.  But one could just as easily say it’s there because various bicyclist and pedestrian scofflaws routinely jaywalked rather than walk an extra 200 feet to cross with the light (while getting their exercise along the W&OD trail.) More recently, the influx of new tax and toll monies means that all kinds of marginal and low-value projects are now being funded, as long as they plausibly help people get around without a car.  This includes a spate of new bridges for the W&OD.  These tend to be for intersections where the road crossings were an annoyance to bicyclists and/or motor vehicles, though not particularly dangerous (at least in my opinion).

There’s a bridge going up for the Route 29 crossing just east of Falls Church, and a bridge is planned for where the W&OD crosses Wiehle Avenue in Reston.  Neither of these is a particularly difficult crossing now, although Weihle is awkward because it’s so close to a stoplight with no place to stop in the median.  Both of these crossings, though, apparently have fairly high automobile accident rates, as cars stopping for bicyclists get rear-ended with some frequency. In essence, right now, these are just crosswalks used by a lot of bikes.  Not unlike the W&OD crossings in Vienna.  But soon those simple crosswalks will be replaced by some fairly large and obtrusive bridge structures.  Here’s a “before and after” view of Weihle Avenue where it crosses the W&OD trail. 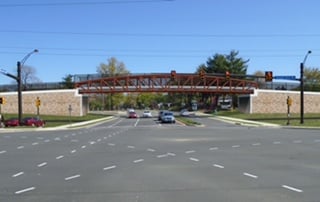 So why not Maple Avenue in Vienna?

It boils down to need, cost, and size.  And all of these argue against a similar structure at the W&OD crossing on Maple Avenue.
First, the existing light-controlled crossing works well.  We have the occasional bicycle scofflaw crossing against the light.  But in my experience, those are few and far between.   And that’s because that current path is in fact the shortest distance.  So we do not have the problem that Falls Church had, with a constant stream of jaywalkers who were unwilling to walk to the nearest light-controlled intersection.
Second, a bridge there would necessarily be fairly large.  And it’s not that you need a massive structure to move the bicycles.  It’s that VDOT requires a minimum 17.5′ clearance (I just looked that up), and bike paths are never supposed to have more than a 5% slope if that can be avoided.  When you combine those two (17.5′ tall, 5′ slope) you realize the bridge would have to span Maple Avenue and 350′ on either side of Maple.
The upshot is that the entire bridge structure (including earthworks at either end) would have to span about 750′ (350′ + 350′ plus the width of Maple).  No coincidence, this is roughly the length of the Citizens’ Bridge in Falls Church.  So, if you look at that (above), that’s more-or-less the minimum size of structure that you can get away with.  Not due to the load of the bicycles, but due to the combination of clearance and slope limits on the structure.

So the very smallest it could be, built to those standards, would be a span from almost Church Street at one end, to almost the end of the Whole Foods market at the other.   This would cut Maple Street off from the trail and make trail access difficult.  (In fact, some of the opposition to the Falls Church Citizens’ Bridge came from local merchants who saw the bridge as discouraging bicyclists from stopping (and spending money) in Falls Church.  See the newspaper article cited above.) It will also cost somewhere in the neighborhood of $6M to $12M.  Or so.
A internet search shows the cost of steel pedestrian bridges runs about $2000/linear foot for a prefab steel footbridge such as the Falls Church one. Of the 700′ length, the Falls Church Citizen’s Bridge is roughly 400′ of steel bridge, and the rest earthworks.  At that price, the steel bridge alone would cost about $8M.   So call it $10M or so, based on that.
A second data point comes from the bridge slated for Weihle Avenue in Reston, which has a preliminary cost estimate of $11.4M, per the newspaper article cited above.
A third data point is a reported cost of about $6M for what looks like a roughly-similarly-sized intersection (W&OD crossing four lanes of traffic).
Caveat:  The reported cost of the Falls Church Citizens’ Bridge, just under $1M, is vastly less than $10M after accounting for inflation.  Adjusting that circa-1992 cost for the Consumer Price Index change to 2020 yields about $2M in today’s money.  On the other hand, that initial cost estimate may have been in error, as the $11.4M Weihle Avenue bridge was originally supposed to cost under $3M.
So, maybe not exactly $10M, but somewhere in that ballpark seems likely.
In summary:  The current Maple Avenue W&OD crossing appears safe, appears to have relatively few bicyclist scofflaws, and in general provides easy on/off access to the W&OD in the heart of Vienna.  Any bridge there would necessarily be large and fairly expensive.  It’s easy enough to see why other intersections have gotten bridges before anyone would think of funding a bridge for the Maple Avenue W&OD crossing.
Share this...