As outlined in Post #1160, the numbers are against us on this one.  This new variant matters because a) it’s significantly more infectious than the current variant and b) it’s more resistant to vaccines.  That combination immediately moves us much further from herd immunity, and makes us much more susceptible to having fresh outbreaks.  Practically speaking, it will be impossible to achieve herd immunity against the Delta variant, given the current vaccination rate and the effectiveness of current vaccines.  That’s all laid out in Post #1160.

We need only look to Great Britain (below) to see what’s likely to occur here.  It’s not a repeat of the third (wintertime) wave, but it’s noticeable enough to cause them to postpone removal of restrictions on indoor public activity.  Delta became the dominant strain in Great Britain around mid-May, which is when new COVID-19 cases began rising there.  (That’s my reading of this scholarly reference.)  An excellent scientific summary of the situation in Great Britain can be found at the U. Minn. Center for Infectious Disease Research and Policy. This means we likely have less than two weeks before U.S. new cases begin rising, as they did in Britain starting mid-May.  Two weeks from now, Delta should account for something like 60% of cases.  That’s the point at which Great Britain began seeing an uptick in cases, as shown in this graphic from the BBC: 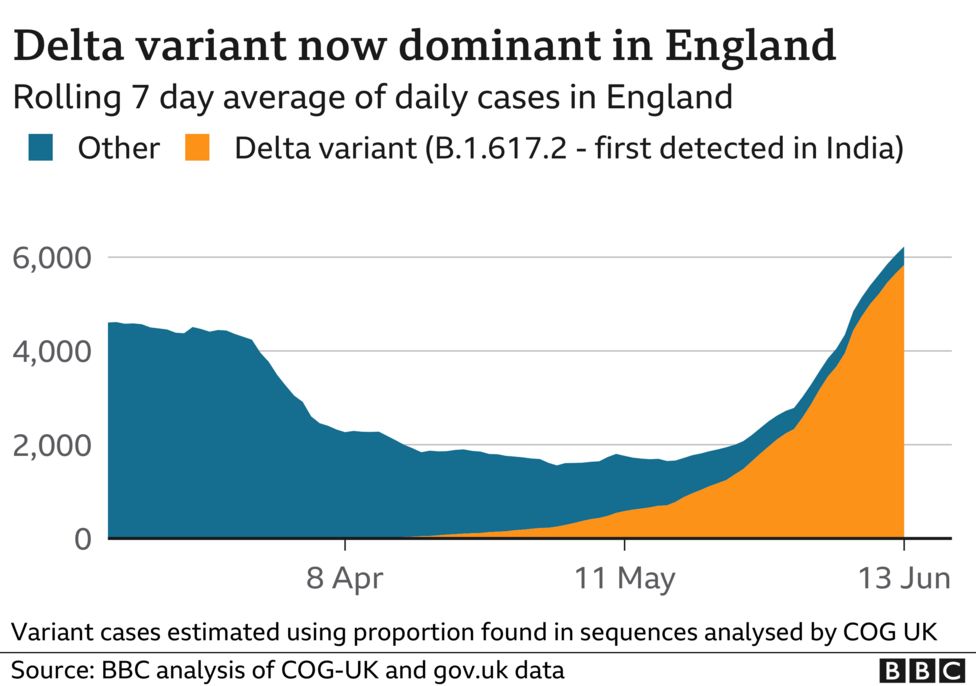 Source:  BBC, COVID: Why has the Delta variant spread so quickly in UK? By Rachel Schraer

I say “less than two weeks” because our situation regarding vaccination and (particularly) COVID-19 hygiene is worse than that of Great Britain.  Great Britain has a modestly higher vaccination rate than we do.  They also have significant restrictions in place on indoor public activities, whereas in the U.S. those are now more-or-less nonexistent.   So it’s not exactly rocket science to make that prediction.

The U.S. CDC updated its state-level estimates of incidence of the Delta variant.  They now date to the four weeks ending June 6.  Missouri has (had) by far the highest proportion of the Delta variant as a fraction of all new cases.  Given how old those data are (how many doubling times have passed since then), Delta surely accounts for the majority of new cases in Missouri now. That provides the context for what would otherwise be the unexplained outlier behavior of new cases in Missouri.  This is something I stumbled across just last week.  It now looks like Missouri is the first state to start along the Delta-driven path a la in Great Britain. Finally, in terms of the actual U.S. trend in new COVID-19 cases, it has become increasingly difficult to interpret any short-term changes due to the “choppiness” of data reporting.  More states have opted to report new COVID-19 cases just a few days per week.  Florida, which appeared to be going to weekly reporting as of two weeks ago, is now reporting on every week day (just not weekends).  That said, I’m continuing to exclude Florida from my regional graph.

That said, excluding Florida, it looks like the new case rate is starting to bottom out.  I also note that the regional lines are diverging from one another, something that tends to happen at inflection points in the U.S. curve.  As you can see from the chart, the U.S. Eastern Seaboard (Northeast, South Atlantic) is doing quite well, with continued steep declines in new case counts.  The rest of the country, by contrast, isn’t doing as well. By eye, that’s a fair match for the CDC regional map of Delta incidence.  Arrows point to the brown sector representing the Delta variant.  As you can plainly see, the U.S. East Coast regions have (had) a much lower incidence of the Delta variant than most of the rest of the country.  By contrast, the Mountain states have the highest incidence, and are also the high-outlier line on the regional chart above. While each little bit of evidence is rather weak, when I put that all together, I think we’re almost certain to have a Delta-driven fifth U.S. wave of COVID-19.  That happened in Great Britain.  It’s the most likely driver of the upsurge in cases in Missouri.  It appears crudely correlated with current regional differences in daily new cases.  Given the current incidence and growth rate, I’d expect U.S. new cases to begin rising in the next couple of weeks.