As of Friday 3/13/2020 it looks like FCPS is going to address this issue in the worst possible way:  Close the schools, but with no deadlines stated.  You can read their notice at this link.  A one-day closure was scheduled for Monday, but schools are now closed today as well.  This was probably inevitable, given that Loudoun County schools closed, and now that several states have closed schools statewide.  At this point, I would not expect Fairfax to reopen the schools any time soon.

Today, the Ancient and Honorable College of William and Mary announced it was going to on-line classes.  This will bring my daughter home for a while.

Having the current epidemic it hit home like that tends to focus one’s attention.  Hence this post.  For what it’s worth.  I made my living as a health economist, so that’s the viewpoint you’re going to get here.  Let’s look at the numbers.

The point of this article is that, best guess, Fairfax County Public Schools (FCPS) is doing the right thing by keeping the schools open for now.  Despite widespread closure of universities in the same geographic area.

Warning:  If phrases like “risk of death in the school-age population” make you squeamish, don’t read this one.

Universities and colleges versus the public school system

The closure of the Ancient and Honorable follows UVa and, my guess, pretty much every other university in the US, at this point.  In Virginia, (nope, that’s been updated, so the information on the Mason splash page is out-of-date), many if not most of the universities and colleges in Virginia have shifted to on-line classes only.

It’s not clear that the classrooms are the core issue. I heard someone make the point that there really isn’t much difference between a dorm-and-cafeteria setup and a cruise ship.  Having a large number of individuals living in close proximity makes for the ready transmission of diseases.  Large gatherings of individuals in classrooms just adds to the risk.

This is by way of saying that the choices made by live-in colleges and universities may or may not be the right ones for schools in general.  Colleges face more of a “cruise-ship-type” disease transmission risk than the public schools do, because college students live and eat together, in addition to taking classes.  And the burdens imposed by college closure are smaller, in the sense that you (typically) don’t have to arrange for day care for your college-aged kid. (And that every college kid likely has a computer for on-line learning, and that provision of meals for poorer students is generally not a critical issue for the college population, and so on.)  So it’s not clear that FCPS will or should follow suit.  Closure there imposes far higher costs than closure of a university. Though, clearly, they are making preparations.

What is clear, though, is that they really aren’t doing this just for the sake of the students.  Mortality rates from coronavirus in the under-21 population appear to be about 0.2%.  That’s still vastly more deadly than, say, common flu in that population (at around 0.01% mortality rate).  It’s a risk well worth avoiding.  But in absolute terms, it’s really the elderly who are at risk. 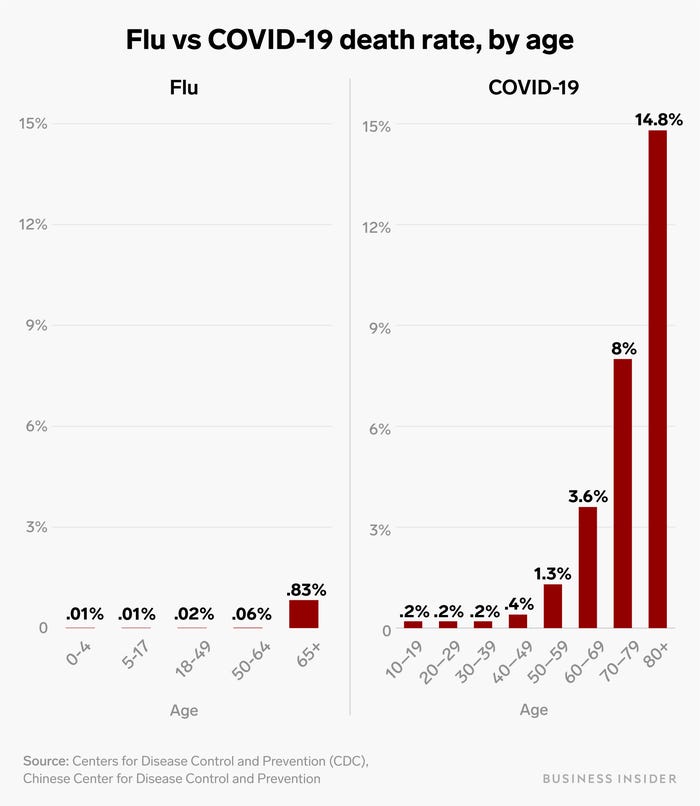 They are doing this in large part because kids are nothing if not cute little disease vectors.  College kids and younger.  And that’s going to be as true for coronavirus as it is for colds and flu.

So, in an absolute risk-of-mortality sense, this precaution is largely to protect older people, starting with school faculty and staff, and then the general population.  Unsurprisingly, the most lethal outbreak so far in the US was in a nursing home.  And we now have confirmation that the mortality rates really are as high as was reported for China, based on a near-five-percent overall mortality rate so far in Italy, with the higher death rate there being attributed to a generally older population in Italy compared to China.

So, to be clear:  The kids are all right.  A combination of a low current prevalence of disease, and a low mortality rate upon contracting the disease, means that the current risk to children, from keeping FCPS schools open during this coronavirus outbreak, is vanishingly small.  If I had to guess at the math, I’d say that, under current conditions, the number of FCPS students expected to die from school-contracted coronavirus is fewer than one.  Really, too small to estimate.

If you need to worry about it, focus your worry on the older staff and teachers at these institutions.  For any given true prevalence of coronavirus in the school population, a staff member over age 60 would be about 40 times more likely to die than the typical FCPS student.

To put this in perspective, you can compare to the risk from coronavirus to the existing (background) risk of death in the school age population.  In other words, how much additional risk is Fairfax placing on this population by not shutting schools?  (Versus just the ordinary risks that these children would face in any case.) Or, more to the point, how bad would this outbreak have to get before you doubled the existing risk of death for the school-age population?

Let me focus on the risk imposed on the population age 10-14.  Here I refer to the CDC’s data on deaths by age (.pdf) and demographic data on Fairfax County.   For that group, we have about 77,000 individuals in Fairfax County.  Based on CDC data, we would expect 12 deaths in that population in the average year (15.5 deaths, on average, per 100,000 persons).

In order for coronavirus to match that background risk-of-death, there would have to be 6000 cases of coronavirus among that age 10-14 population.  In Fairfax County alone.  Needless to say, that’s vastly more cases than are currently known to exist in the US.  And, needless to say, the schools would be shut long before that happened.

That said, other school systems may make other choices.  I see that Loudoun County just announced that they are closing their schools for a week.  So you can’t rule out the potential for Fairfax to follow suit.  But without a single diagnosed case within the school system, that still strikes me as premature, given the burdens that imposes.

Then why bother shutting universities?

Then what’s the point of going to on-line classes at universities?  Aside from the perception of higher risk of disease transmission (the “cruise-ship-type” risk), these universities are largely doing a public service.  By avoiding mass gatherings and dorm-live situations, they are helping to stop or slow transmission of the disease generally.  And unlike FCPS, they don’t cause an instant child-care crisis if they do that.

Slowing down the transmission rate is key because the US health system maintains very little slack.  As I noted in Post #535, in all of Fairfax County, we probably have no more than 400 empty hospital beds.  And fewer ventilators.  Once those get filled … there’s really no plan for what to do next.

This point is now becoming generally known.  Even if everyone eventually gets the disease, you’ll have more survivors if you can spread that out over time.  Precisely because you won’t overwhelm the health care system.

So expect to see more of this in the immediate future:  Organizations that give up mass meetings of all sorts, to do their bit for the public health.  Hence my prior plea for the Town to get the MAC moratorium extended (Post #542).  If this epidemic gets worse, any organization forced to hold a large public meeting is going to look foolish, and holding those meetings will constitute a threat to public health.

The Washington Post recently had an article on this, with a history lesson from the 1918 flu epidemic.  In Philadelphia, they went about business as usual.  In Saint Louis, they cancelled large public gatherings.  This time around ,we all want to be like Saint Louis.