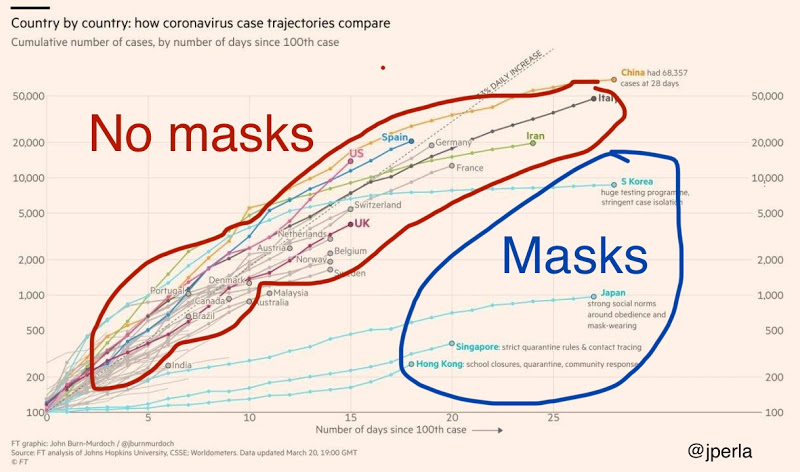 I have worn a beard of some sort pretty much since my mid-20s.  I’m clean shaven now.  And that’s because I’m not going to enter any enclosed public space without wearing a mask, until such time as I can get vaccinated against this.  And a surgical mask doesn’t work well with a goatee.  So, it’s time to shave.

That mask use runs contrary to current CDC guidance.  But I’m not the only one disagreeing with CDC guidance in this regard.  This article was brought to my attention by a colleague, and I think everybody in the USA should read it.  Start with that.

And it looks like, nationally, a lot of people are more-or-less coming to the same decision.  Fully realizing that the main purpose of the internet is to allow crazy people to find each other and reinforce their views, the push to use some sort of mask in public, or at least to question the official CDC guidance, appears to be growing.

At present, I’m sitting here trying to sift through the available science on masks.  I cannot tell you that there is a good evidence basis behind wearing a mask.  I’m pretty sure that cheap ones don’t do much to protect you, but I’m beginning to suspect that they do something.  And that, as importantly, they do something to protect others from you.

So, I know what science questions I need to ask, I’m just not finding answers. And my profession isn’t medicine, I don’t really have the bona fides to answer those questions anyway.

But, as an economist, I am qualified to do a quick little cost benefit analysis.  Let me do it in the form of a word problem.

A 3M Aseptex non-sterile mask retails for about $0.40.  Let’s say that universal use of those masks, by adults, would shorten the pandemic a bit.  Let’s say that adults can reuse them as some hospitals now are, by the simple expedient of putting them in a paper bag to dry overnight.  And let’s further say that, at some point, this pandemic is going to grind the US economy to a halt.  There are about 250 million adults in the US.  And the 2019 US GDP was $21.44 trillion dollars.

Question:  How much would universal mask use have to shorten this pandemic, in order for it to be cost-effective.

Answer:  About three minutes.  If universal mask use shortened the duration of the US coronavirus epidemic by three minutes, it would be cost-effective.

For the more medically minded, we could also do this by focusing narrowly on medical care costs, and do this in terms of cost-to-treat.  How many (say) hospitalizations would need to be avoided by universal adult mask use, in order for the reduction in hospital costs to offset the cost of the masks?  Guessing that a 12-day ICU-intensive is the median for this, based on the previously discussed WHO report on the Chinese experience, I’d guess a cost per discharge around $100,000.  If masks are $0.40, then if universal mask use merely avoided one hospitalization for every 250,000 US adults, it would be worthwhile from a cost-benefit standpoint.  Since there are 250 million adults, that means that if it merely avoids 1000 coronavirus hospitalizations, over the course of the pandemic, it more than pays for itself, merely looking narrowly at hospitalization cost, and ignoring the much larger GDP loss as the economy shuts down.  Either way, seems like a bet well worth taking.

It’s not rocket science.  Masks are cheap.  GDP loss is hugely expensive. Hospitalizations are somewhat expensive.  All that a policy of universal mask use needs is just a tiny probability of modest success, and such a strategy would be  hugely cost-effective. In my opinion, the evidence, such as it is, gives you that tiny probability, and then some.  It’s a cheap bet.

Seriously, in terms of taking a bet on something, that seems like a pretty cheap one, to me.  As in, what on earth are we waiting for?  It may be time to push the medical establishment aside on this issue, and let the economic consequences of action or inaction drive the decision, despite possibly ambiguous scientific evidence.

A quick tour of my dilemma on the science.

Those results are from a Cochrane review, no less: Physical interventions to interrupt or reduce the spread of respiratory viruses.  Full text is available via PubMed, at that URL.  That’s based on seven separate studies of people who ended up hospitalized for 2003 SARS, versus a comparison group of heavily-SARS-exposed individuals who did not end up infected with SARS.

Cochrane reviews are the gold standard for synthesizing our understanding of important medical topics. So what’s the problem?

Here’s the first problem:  It’s not a randomized trial, it’s observation data.  People who themselves chose to wear a mask probably chose to do that because they were being infection-cautious along many dimensions.  It’s a fair bet, for instance, that mask-wearers were also hand-washers, and so on. So while it looks like a strong finding, it is in fact based on fairly weak data.  Likely, the effect attributed to masks was, at least in part, due to all the other things that those mask-wearers did.

That said, when a multivariate statistical analysis was done, mask use was still a statistically significant predictor of lower infection, independent of the other anti-infection measures taken.  That’s again from that Cochrane review cited above.  So, weak is not the same as non-existent.

But here’s the bigger problem.  After that Cochrane review came out in 2011, two large controlled clinical trails have been done with respect to mask use and flu, for hospital OPD workers, with … I would say almost uninterpretable results.  Certainly, results that are being interpreted as saying that masks don’t work.  And for sure, results that appear contradictory and nonsensical to me.

Finally, probably the worst problem is that the medical establishment knows that there is no “basic science” behind the idea that cheap (surgical) masks should work to reduce infection rates.  (Other than having already-infected individuals wear them, to step them from spreading as many droplets when they cough).   The reason is that particles that would linger in the air would not be filtered out by such masks.  And so, if we’re keeping our social distancing, cheap masks ought to be redundant.  Just staying six feet away from your droplet source will keep you away from all (most?) of the droplets that the mask would stop.

But maybe the definition of “science” here is too narrow.  I note that there may well be other mechanisms at work here, other than simple filtration ability.  We can start with something as simple as, if you wear a mask, that enforces not touching your face.  And we could move from that to my hypothesis (just prior post), that slowing down the air mass leaving your mouth, as you talk, should prevent you from “spraying” the person you are talking to with droplets of all sizes, including aerosol-sized.  (Because, there’s no longer the fast-moving stream of air needed to carry them forward.  They go through the mask, but they don’t travel as far as they would without the mask).

My point is that the simple statement “cheap masks can’t filter small droplets effectively” is true, and yet it is clearly not a sufficient reason to dismiss use of surgical masks by the general population.  There could be more to it.  And, their use may not protect you (the only thing tested by mask research so far, as far as I have been able to tell).  They might protect other people from you.

Finally, there’s the epidemiological evidence, which you practically can’t help but notice. Look at the countries that seem to be beating this back, and … sure seems like mask use is pretty common there.  In particular, I’ll point you to the graphics from this organization — maskssavelives.org — currently advocating for universal mask use.  I’ve put that at the top of this posting.

No clue yet whether this is quackery or science.  But just as an observation — well, just look at their graphic, that’s all I’m saying.

If you decide to try to make yourself a mask, I suggest you look at the final section of the already-referenced article on the evidence on mask use.  They can (e.g.) point you to a fabric pattern from Deaconess Hospital, and so on.  Bottom line is that the better it fits, the better it works, for a given mask material.

At this point, I don’t think I’m going to find a smoking gun on whether or not cheap masks work in this context.  Observational data in communities says yes, controlled clinical trails in hospitals say no.  Or maybe no, I’m not sure.

So, we either need to do it, regardless, and maybe waste some time.

Or we need to test whether it does anything, pronto.

Here’s something we really needed to have done, about two weeks ago.  We need a handful of small, reasonably-self contained localities to issue a public mask ordinance.  In order to enter any enclosed public space legally, you must wear some sort of face mask.  At the rate this continues to grow, shouldn’t take more than a few weeks to get a fairly definitive answer as to whether or not that works.  Match those mask-ordinance communities up against communities that looked about the same, at the time.  Wait a couple of weeks.  And at the rate this is growing, if a universal mask ordinance works to any material degree, that ought to be clear in the data.

On final, final thought is that, if I read the evidence correctly, my primary reference on aerosol transmission (airborne transmission) says that use of N95 masks against flu (versus surgical masks) was not mandatory in the US prior to the 2009 swine flu epidemic.  That’s this U Minnesota publication. Then, only out of “an abundance of caution” did the CDC being recommending N95s in that situation.  So the idea of not wearing a cheap (surgical) mask seems relatively new.  And it seems, to me, to be totally misplaced as guidance for a population with no access to N95 masks.  Given that we, the general public, have no way to buy N95 masks now.