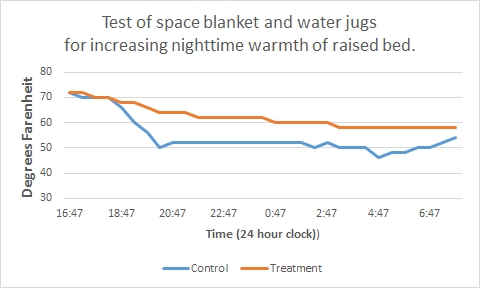 The upshot?  Last night, I managed to keep my raised bed about 10 degrees F warmer than the surroundings by using some water jugs and a space blanket.  And I’m not sure the water jugs were even necessary.

This post shows what I did and how well it worked.  I’ve decided to split off all the math that explains why I did this into a separate post.  This outlines the method, the results ,and four more things I need to test.

Recall that I’m trying to find a way to keep my raised garden beds warmer at night.  I have a goal of raising them 10 degrees F above their surroundings.  I have a couple of temperature recorders, and I’m doing controlled trials of various methods.  Yesterday I rejected the use of thin floating row cover (Post #G21-012).

In this post, I’m testing the use of a radiant barrier (“space blanket”) and some jugs of water to keep the garden bed warm overnight.

Below you see four gallon jugs of water, in black trash bags, sitting on a 4′ x 16′ raised garden bed.  I let those jugs sit in the sun to heat up, but because I started this mid-day, they only reached 75F before I got to the next step.

I’m hoping those warm jugs will heat up my bed all night long.

Separately, the plastic baggie in the middle holds one of two temperature recorders. In late afternoon I put a space blanket on top (see picture below).  This is one of those $1.50 “emergency blankets” that come folded up into a package half the size of your fist.  It’s thin but quite strong.  Most importantly, it’s really shiny and makes an excellent “radiant barrier”, that is, it largely prevents the bed beneath it from radiating infrared energy up into the sky.

I’ve clipped the space blanket to the sides of the bed and buried the open end in mulch.  So this both covers the bed with a radiant barrier and blocks air flow.

You can just make out the other temperature recorder, in a baggie at the far end of the raised bed. The thing in the middle that looks like a sewer pipe cap is a sewer pipe cap.  This is a “core bed” (Post #G21-008), and I put a short piece of pipe in so that I can pump water directly into the core.  This may matter for this experiment, because this bed should be retaining quite a bit of water. The only other relevant piece of information is that the water in the jugs had cooled to just 60F by the next morning.  They went from 75F to 60F overnight.  That’s relevant to the detailed discussion of the math, in a separate posting.

To avoid confusion, I’m not going to show yesterday’s results for comparison.  If you look back to those results, and realize yesterday’s graph started around 6 PM, you can see that the steep part of the blue curve above is “normal”.  That’s what happens when those beds fall into shade.  And so that gives me great confidence that what you see on the red line above is, in fact, the impact of the water jugs and space blanket.

Conclusion:  Some water jugs and a space blanket did the trick.

Four more things that need to be tested.

Based on the math (not shown), I’m pretty sure the success of this is mostly due to the use of a space blanket.  But I need to test that.  In fact, I see four more things I need to test.