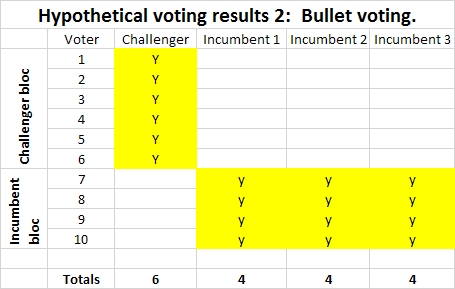 What do these things have in common?

Two years ago, in Vienna Town Council elections, supporters for the two pro-development candidates reminded voters that they didn’t have to vote for three Town Council members.  They could vote for just two.

This year, the non-incumbent candidate is reminding voters that they don’t have to vote for three Town Council members.  They can vote for just one.

Every year, in Town Council elections, the vote total is less than three times the number of voters.  Even though every voter may select up to three candidates on the ballot.

Now that you know the term for this common voting tactic, you can Google it and do your own research.  Wikipedia is as good a place as any to start.

Briefly, bullet voting is the tactic of voting for fewer candidates than you legally can, in a multi-winner election.  Typically, it means voting for just one candidate, when you can (e.g.) select up to three on the ballot.

Why would you want to bullet vote?

Let me give a simple, hypothetical numerical example.   Suppose that there are:

So, what’s the problem?  If 60 percent of voters prefer the challenger, he’ll win, right?  He has to, right?

Result:  The challenger loses, as shown below.  Despite being strongly favored by 60% of the voters. Scenario 2:  Voters bullet-vote.  In this scenario, the 60% of voters who strongly favor the challenger don’t feel obligated to pick two incumbents at random to fill out the ballot.  They bullet-vote instead.  The 40% who favor the incumbents fill in the three incumbents. I’m neither endorsing nor disparaging bullet voting.  I am suggesting only that voters think for themselves, and that they have a basic grasp of the voting system they are using.

Bullet voting isn’t some sort of communistic plot to undermine America.  It’s a normal and long-standing part of the democratic process.  It’s a commonly-used voting tactic.

It’s in Wikipedia, for goodness sake.

As a voter, you shouldn’t feel guilty about bullet voting, or about not bullet voting.  You should do what you believe to be rational.  The ballot literally says “up to three” in order to give you that option.  Or not.  As you see fit.

In some cases, bullet voting is the rational response to our 18th Century voting rules.  Our ballots are, in a very real sense, dumb.  They don’t allow you to express a preference (first choice, second choice, third choice), they only allow you to say yes or no to (up to) three candidates.  The only option you have, for expressing strength of preference, is to vote for fewer than three.

If the voting had been changed to allow you to rank your candidates by first-second-third, the challenger in the example above could win without bullet voting.  The challenger would collect 60 firsts, which would exceed any of the incumbents.  But we don’t vote like that in Virginia, so that’s not an option.

I guess if there is any lesson in this, it’s that you should vote for candidates that you genuinely want to see in office.