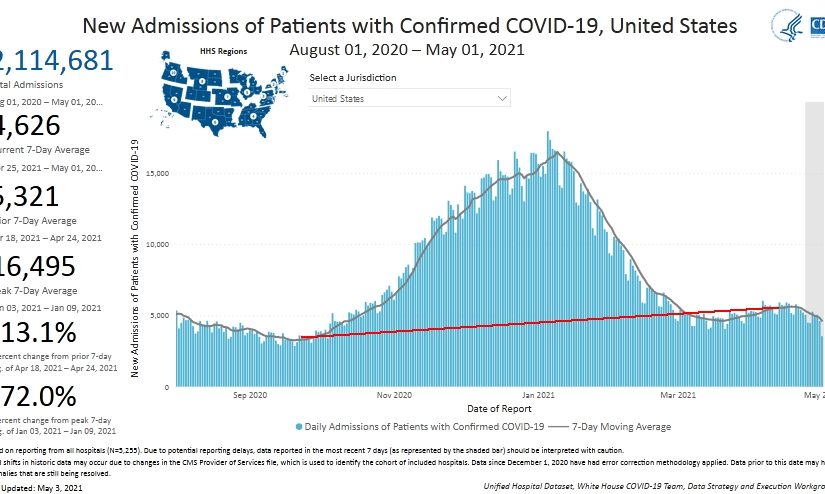 There’s no change in trend.  We’re 19 days past the peak of the U.S. fourth wave.  There is a slow downward trend in new COVID-19 cases per day.  We’re now 30% below the peak rate.  New case counts are declining steeply in the Northeast and are stable-to-declining in the other regions. COVID-19 hospitalization rate per new case:  Why isn’t it falling?

As I discuss below, I think that’s mostly due to self-selection.  The pandemic is increasingly concentrated among those who won’t get vaccinated.  Surveys show that individuals who won’t get vaccinated won’t do anything else COVID-related, such as wearing masks or maintaining social distancing.  It’s not much of a stretch to think that they probably don’t get themselves tested for COVID-19, either, unless they’re pretty sick.  As a result, I think the hospitalization result isn’t so much a case of the numerator (hospitalizations) going up, I’m guessing it’s probably due to the denominator (diagnosed cases) going down.

I’ve noticed that even as this has become a pandemic of children and young adults, we haven’t seen a reduction in the hospitalization rate.  Or, at least, not much.  Which is odd, because the elderly have a vastly higher hospitalization rate than the non-elderly.

I can’t seem to get raw national data to combine on a single graph, but I can get separate graphs from CDC, where the hospitalization data are based on a subset of U.S. hospitals.  By eye, the prior-trough-to-current-peak change in hospital admissions for COVID seems to be a pretty good match for the change in total cases over the same period.  Below, that’s admissions, left, and cases, right, both from CDC. Because I can’t lay my hands on national data that will allow me to do any analysis of this issue, I’m going to turn to Virginia.  The Virginia Department of Health provides, as far as I can tell, the highest-quality of publicly-available data anywhere in the U.S.A.

First, for Virginia, here’s what the shift in the age mix of new cases looks like.  I’ve drawn in the linear trend, although you can see the raw data as the thin line oscillating around the trend. Meanwhile, our rate of COVID-19 hospital admissions per new COVID-19 case has risen.  This is the opposite of what you’d expect, based on the shift in age mix, and younger persons are rarely hospitalized.  If I “standardize” the data — basically, freeze the age mix of the population, and reconstruct what the admission rate would have been without the shift in age — I get an even  more dramatic increase in the hospitalization rate. The raw admissions rate (COVID-19 hospital admissions per new case) roughly tripled between January and the end of April 2020, with about 2% of new cases hospitalized at the start of the year and just under 6% hospitalized by May 1.  But if I account for the shift in age mix, I find that the age-adjusted hospitalization rate roughly quadrupled.

I should note that this number is quite volatile.  It seems to go up and down quite a bit for no particular reason.  That said, these numbers stand out even against that volatile background variation.

You can fill in the final piece of the puzzle by showing the hospital admission rates by age group.  (The age breakouts are finer here, because I did this as part of a different data analysis.)  You can plainly see that the fraction of people admitted for COVID-19, as a percent of those diagnosed, has risen for all age groups, but shows a particularly pronounced rise for the oldest old (80+).  Currently, in Virginia, if you’re in that age group and are diagnosed with COVID-19, you have a better than 50/50 chance of being hospitalized for it. I’m not entirely sure what to make of that, but I’m guessing this is mostly the effect of self-selection, and not the impact of the U.K. COVID-19 variant (B.1.1.7).

I have no way to prove that, but I’ll give you the reasoning behind my guess.

First, note that the change in hospitalization rate is too large to be attributable to a greater virulence of the U.K. strain.  Any greater virulence of the U.K. strain is ambiguous enough that there is still debate over whether or not it is worse.  If Britain had seen a quadrupling of hospitalization rates, I don’t think there would have been any debate.

Second, we are at the point where the pandemic is occurring within a smaller and smaller subset of the population.  As an increasing share of the population is immune either from prior infection or vaccination.  With freely-available vaccine, it’s increasingly confined to the self-selected set of individuals who refuse or are unable to get out an obtain vaccination.

Now, there is no reason to suspect that this “vaccine hesitant” population is less healthy.  To the contrary, for the key metric of cigarette smoking, Democrats are more likely to be smokers than Republicans (Source:  Gallup Poll).

And so, my guess is that this is mostly being driven by a shift in the fraction of cases diagnosed.  I’d bet that the same people who are too stubborn to be vaccinated are, by and large, the same people who’d shrug off the symptoms of COVID-19 rather than be tested.  And as a result, mild cases within this population are under-reported, and that smaller fraction of cases is enriched in cases that require medical attention.

Restated:  My guess is that within the population refusing the COVID-19 vaccines, people don’t bother to get COVID-19 tested unless they’re quite ill.  So the total number of cases diagnosed is reduced, and those that are diagnosed tended to be disproportionately the sickest cases.  And that drives up thee rate of hospitalizations per diagnosed person.

A greater virulence of the U.K. variant may add to that effect.  But I’m betting that the main driver of this is self-selection.  It’s getting to the point where the entire pandemic is being carried forward by people who were offered vaccination but refused.  And based on survey data, their attitude toward you-name-it — testing, mask use, distancing, restrictions on meeting — differs materially from the vaccine-compliant population.

Here’s a key quote from a seemingly high-quality survey.  Translating the jargon, those who said they weren’t going to get vaccinated were about half as likely to wear a mask, and about 20% as likely to engage in social distancing.  With that as background, it’s not much of a stretch to think that the same people would refuse to be tested unless it appeared absolutely necessary.

Finally, I’m going to dismiss the possibility of some secular trend toward hospitalization.  Virginia’s hospitals never came close to capacity, even during the peak of the U.S. third wave.  If they were not constrained in the recent past, it’s hard to see them modifying admission policy now.

Deaths per newly diagnosed case.  I will point out that, despite some clearly data reporting issues, you can see something similar, in Virginia, in terms of COVID-19 deaths per new COVID-19 case.

That’s a lot harder to see.  Unlike the rate of new COVID-19 hospitalizations, death rates lag the case counts by about three weeks.  And there have been a lot of data reporting artifacts, as states processed their death certificate data and added numerous old deaths to the current counts.

But just FWIW, for Virginia, here’s the “contemporaneous” death rate — the ratio of seven-day moving average of deaths to seven-day moving average of new COVID-19 cases.  The huge spike in the middle is due to Virginia “catching up” on last year’s death certificate data, and reporting those additional old cases.  Ignoring that, it appears that deaths per new case is now about three time higher than it was at the start of the year. That’s far beyond what anyone has ever suggested for the increased virulence of the U.K. strain.  My bet is that most of that is due to the self-selection discussed above.