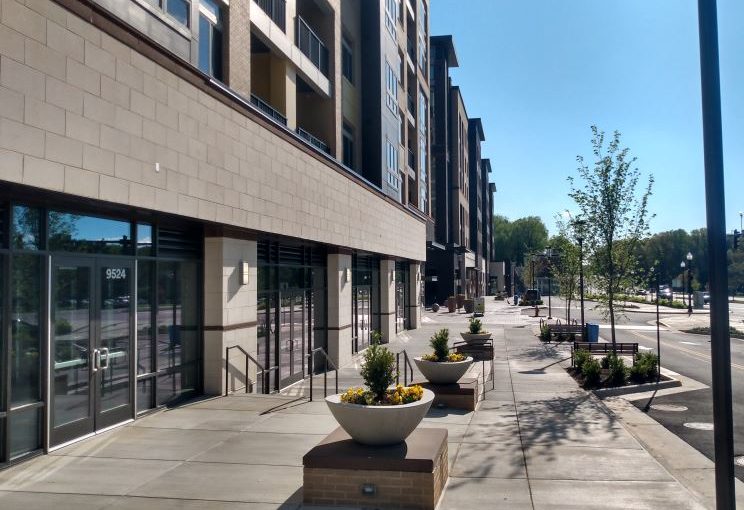 Now that the election is over, the Town has posted the first detailed look at its economic development study.  (Download it from this link, ,pdf).

Per the Town’s consultant, we need to put 2400 apartment on Maple merely to “catch up” with “competing” areas.  And we must stack those in at 100 dwelling units per acre, to be economically viable. I’m not even going to mention all the things that I think are ill-conceived with this document.  I’m just going to point out a few obvious things about that statement, which our Town Council will now receive as a fact, presented to them by their consultant.

At 100 units per acre, we’re talking some tall buildings.  For example, I profiled Scout on the Circle, which is six stories, but a mere 50 dwelling units per acre (Post #1111).  Near as I can tell, with a bit of research, 100 per acre is right at the upper limit of what can be built as “stumpies“, that is, wood framing over concrete podium buildings such as Scout on the Circle.

At 100 dwelling units per acre, we’re talking some significant new point-sources of traffic.  If developed to a density of 100 dwelling units per acre, the Giant Food shopping center would have about 1000 apartments/condos.  At an average occupancy of about 1.7 persons per apartment, you’d have 1700 people living at that Giant Food property.  Or, more than 10 percent of the current population of Vienna, living on one block of Maple Avenue.  With, effectively, no choice but to drive on Maple if heading toward Tysons, and severely restricted choice (Maple or Locust/cut throughs) if driving toward Oakton.  And with nearly-zero public transit options, other than the 436 Fairfax Connector bus (Post #225).  As if anyone in Vienna would take the bus (Post #416).

Just picture half the residents of that complex trying to exit that new development, onto Maple Avenue, during the peak morning rush hour.  Pre-pandemic, Maple Avenue traffic crawled through that area at a peak rate of 2300 cars per hour.  Another 800, during the peak, would amount to about a one-third increase.  That should be interesting.

I can only guess that nobody involved with this considers the possibility that new residential traffic may displace existing commercial traffic along Maple.  It’s tough enough to get to the shops on Maple now.  Pile on housing at 100 units per acre and I’m guessing that some fraction of the people who are driving to that area for the retail may decide to go elsewhere.

I also wonder whether anyone has pondered the walkability/pedestrian safety aspects of this.  For sure, 444 Maple West adds a hazard to what was otherwise a fairly hazard-free walk to school, for my kids (as described in this post).  At 100 dwelling units per acre, that’s going to be a lot of cars crossing the sidewalk.

Finally, consider what may happen to the two MAC-zoned projects for which construction has not yet started.  If the Town decides that 100 dwelling units per acre (and everything that goes along with that) simply must be done, there’s nothing to stop the existing projects from dropping their MAC-based plans and producing much larger, denser buildings under by-right development.

This is a particularly tough call for Councilman Potter, as he gained his seat originally, in large part, on the strength of a petition against 444 Maple West as being too big and too dense.  And now the Town’s consultant is saying, in effect, you need to rezone in such a way that would, in theory, allow 444 Maple West to scrap the current plans and produce a much bigger, denser apartment building.

Finally, you may wonder why, prior to the election that occurred just three days ago, I said that there was only one question that I wished I could have a clear answer from, from all Town Council candidates.  That question being, how tall do you think the buildings should be on Maple Avenue (Post #1132).  But, for our incumbents, Town of Vienna elections aren’t about clear statements on specific positions.  They are about vague generalities.  And, despite the rezoning being the biggest issue on the table, none of the people currently in those Town Council seats felt any obligation to be clear about this.

And now, a couple of days after the election, we see that Town Council being told that nothing less than 100 dwelling units per acre could possibly work.

The interesting question now is, what are they going to do with that.

One, they could look at the two MAC mixed-use projects, both of which were at vastly lower density, and say, well, that 100 per acre doesn’t seem to match reality around here.

Three, they could simply use that as a boogie man, so that when they finally settle on some density that isn’t quite as high as that, we’ll all breathe a sigh of relief.

Of four, something stranger still.  It’s tough to say with Vienna Town Council.

In any case, there you have it.  The Town’s consultant has just told it that it must add at least 2400 apartments merely to “catch up” with other towns and cities in the area.  Because those are our “competition”.  And we have to add those at a density of at least 100 dwelling units per acre.

It’ll be interesting to see what Town Council makes of that.  Whether the same people who repealed MAC zoning, based on public outcry, and now going to replace it with something that demands taller, denser by-right buildings than were ever conceived of under MAC.

Impact of all those new residents, on school crowding?  Not even on the radar screen, as far as I can tell.

Town Council will be discussing this on Monday.  Maybe you should tune in and hear what they have to say, if anything.  The meeting materials are at this link.  These days, for whatever reason, the only way to see a work session live is to register for it via Zoom, as described on this Town of Vienna web page.  You may also email your comments, via the link on that page just cited.  In theory, a video recording of the (entire?) meeting will be made available afterwards on the media section of the meeting materials link above.