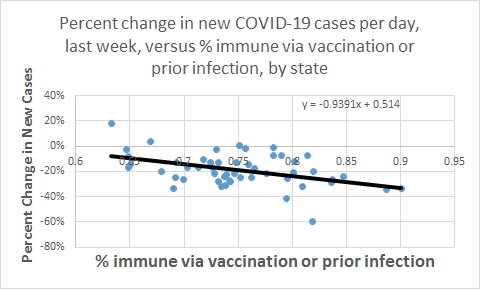 Yesterday I used the most recently-released CDC seroprevalence data to correct my national and state-level “herd immunity” estimates.  I reduced my estimate for the number of COVID-19 infections that were never formally diagnosed with a positive PCR or antigen test.

The resulting table provides a plausible estimate of the fraction of each state’s  population that is immune to COVID-19.  It combines vaccinations (a known number) and prior COVID-19 infections (an estimate), and makes a reasonable  attempt to take out the overlap between the two.  The end result is an estimate of where each state stands on the path to herd immunity.

Now I should do the obvious thing:  Plot that state-level estimate of population immunity against the recent trend in new cases, by state.  If we’re approaching herd immunity, a higher the level of immunity in the population should be correlated with a more rapid retreat of the pandemic.

Base on that logic, does it look like we’re achieving herd immunity?  My answer is yes, it sure looks like it to me.

Here are plots of the last week’s change in new cases, and the last two weeks’ change in new cases (per 100,000 per day, seven day moving average).  By state.  On the Y-axis.  Plotted against my estimated fraction of the population that is immune to COVID-19, on the X-axis.

A downward slope to the line indicates a herd immunity effect.  The larger the fraction of the population that is immune, the more rapidly the pandemic is collapsing. I realize this may not look like much.  But the interesting part is that this is new.  I’ve plotted this in the past, and I never showed any sort of negative relationship before.  This is the first time, in the pandemic, then I’ve been able to say that the higher the population-level immunity, the more rapidly the pandemic is shrinking.  See last section below.

These plots may look a bit ragged, but there are a lot of factors other than the simple count of immune persons that will determine whether or not you’ve reached herd immunity.  It really isn’t as simple as adding the counts of vaccinated and infected individuals and expecting to see a perfect plot emerge.

First there is a behavioral offset.  If the individuals who chose to get vaccinated were already being cautious, and by and large weren’t the ones out spreading COVID-19, then the impact of vaccination will be less than expected.  I walked though that in Post #1080.

Second, COVID-19 hygiene still matters in the overall calculation.  Anything that interrupts transmission of the virus counts toward achieving herd immunity in the short run.  I went through that in Post #978.

My point is that even if I had a perfect estimate of the fraction of the population that is immune to COVID-19, I still wouldn’t get a perfect clustering of the data points.  Too many other factors enter into the full calculation.

Finally, I want to emphasize that this inverse relationship is a new development.  I’ve been looking for this relationship from time-to-time, for months now.  In the past, and I always found the reverse.  I always found that states that had a high rate of growth of new cases, at that moment, were also the states that had high levels of total immunity due to a high cumulative case count.  In other words, in the past, I always found that the pandemic was still growing, and that a large immune population in the state was associated with increasing counts of active infections within a state.

Below, here’s the  version of the graph that I published just two months ago, on March 9 2021 (Post #1049).   It’s not exactly analogous to the ones above, but it’s close.  Two months ago, there appeared to be no relationship between the estimated amount of immunity in the population, and the new-case rate.  This is just one of several variations I have tried in the past, and they all gave results like this.  So the graphs above represent a new development in the pandemic.