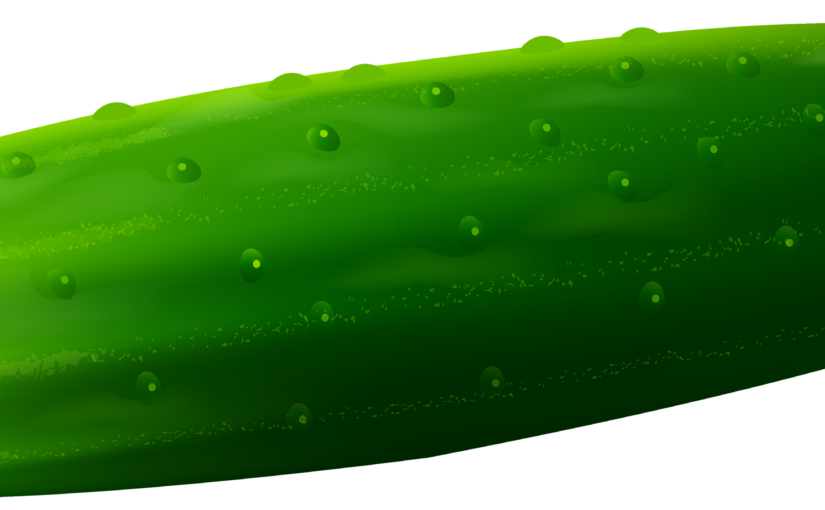 This year, I thought I’d avoid cucumber and summer squash pests by growing those vegetables as spring crops only.  Plant as early as possible, harvest what I can, then tear them out in early July and replace them with some heat-loving vegetables.  Instead of spending half my summer trying to defend those plants, the plan was to grow them when they are easy to grow, and replace them when their main pests arrived.

That seems to be working out OK for the summer squash.  Plants are setting a lot of fruit, and, fingers crossed, I ought to be picking my first summer squash this weekend.

So I find myself in the middle of a cucumber crisis once again, pitted against the wily cucumber beetle.  This is a review of what didn’t work last time, and what I’m planning to try this time.

Powdery mildew and squash vine borer:  Too much work

In the end, my conclusion is that I can deal with those, but it’s just way too much work.  Those remedies involve spraying (and re-spraying, and re-re-spraying) your plants.  In the end, that was just unpleasant and more than I cared to do.

A smarter person might choose varieties that are naturally resistant to those pests.  Many varieties or squash and cucumber are bred to be resistant to powdery mildew.  A few summer squash varieties are said to be naturally resistant to squash vine borer due to their nearly-solid stems.  And for cucumbers, you can always grow varieties marketed as resistant to bacterial wilt.  Or, if you really want to avoid the problem entirely, you can grow “seedless” (parthenocarpic) cucumbers that don’t need to be pollinated, and so can be grown in a screened enclosure that excludes all insects.

But I’m a little too stubborn to tailor what I plant around the needs of my insect and fungal friends.  If I’m going to take the time to grow it, I want it to be the variety I want to eat.

And so, my plan this year was just to avoid the problem entirely.  Plant early, harvest what I can, then tear those out in favor of vegetables that like the hot weather.  In effect, enjoy a relatively trouble-free early summer, then beat a strategic retreat when the pests arrive in July.

No obvious cure for cucumber beetles

My clever plan has now been upset by that first generation of cucumber beetles that is currently in my garden.

This is most unfortunate, because I never did arrive at a solution for cucumber beetles I was comfortable with.  Last year I tried two techniques, both of which failed.

Failure-to-eliminate is a problem, because the issue I had with cucumber beetles is that they carry bacterial wilt.  They infect the cucumber plant as they chew on the leaves.  Varieties that are not resistant to bacterial wilt — which includes most or all heirloom varieties — then quickly die off.  This means that merely reducing the numbers of cucumber beetles is not sufficient.  You have to kill them all, find some way to keep them completely off your plants, or only grow cucumber varieties that are resistant to bacterial wilt.  Or, if not, one of the little @#$$%#s will eventually get to your cucumber plant, infect it, and kill it.

I never found a chemical or pesticide approach to cucumber beetles that I was comfortable with.  The main issue is that anything that will kill cucumber beetles will also kill bees.  Anything that will remain on the leaves, and kill the beetle, will remain on the fruit or in the soil.  You have to spray the entire cucumber plant to be effective, which means that whatever poison you are using, you are using a lot of it.  And the blossoms on cukes are so small, and so common, that it’s hard to spray all the leaves without getting some on or in the blossoms.  Which, as I understand it, will then kill the bees that access those blossoms.

One gardener whom I trust (Pilarchik, the Rusted Garden) deals with this with a daily dusting of Sevin (carbaryl) on the lower leaves of cucumber plants.  He dusts in the evenings, and sprays that off in the mornings.  (That approach prevents bees from directly contacting the carbaryl, as they are dormant overnight).  I am fairly sure that would work, but I don’t want to use carbaryl in my garden, let alone use it and replace it on a daily basis.

Short-lived contact poisons known to be capable of killing cucumber beetles are a) non-selective, and b) require direct contact, as in, literally spraying the beetle.  The foremost of these is pyrethrin, in some form.  That’s quite short-lived, which means it will not stay active on a leaf surface once it dries.  You have to spritz the beetle directly, which is of limited use in this case.

Synthetic long-lived contact poisons can kill cucumber beetles as they chew on the leaves.  Foremost of these are the permethrins.  But those are long-lived enough that, as with carbaryl, I don’t want to use them around my food plants.

I heard at least one credible source say that spinosad (a medium-duration poison derived from bacteria) is ineffective against cucumber beetle.  That, however, was based on the “Captain Jack’s” formulation that is about one-tenth the strength of spinosad mixed (according to directions) from concentrate.  So I would say that the jury is out on that.

There is some modest body of anecdotal evidence that “insecticidal neem oil” is effective against cucumber beetles.  That said, all the formal research says that it’s not that great.  (Neem, recall, comes in two forms.  One, the “hydrophobic extract”, is just a vegetable oil, and can be used like any other horticultural or dormant oil.  Raw neem oil, by contrast, contains a potent but short-lived insecticide, azadirachtin.  That would be the product to use in this case. )

For both spinosad and insecticidal neem, the theory is that they can be sprayed in a way that presents minimal toxicity to bees.  But that depends on spraying when bees are dormant (easy enough, spray in the evenings), but also depends critically on NOT spraying the flowers.  For squash, with large, discrete flowers, that’s fairly easy to do.  Particularly if, as was the case last year, I was spraying the stems for squash vine borer.  With cucumbers, I’m not sure my aim is that good and/or the spray/drift is that precise. I think that if I go with either of those, I’m going to use a pad-type applicator and wipe it on the leaves, rather than spray.

I’ve seen reports of success in using diatomaceous earth on cucumber plants as a means of cucumber beetle control.  This can, in theory, be sprinkled on the leaves, and will eventually kill any hard-shelled insect that crawls across those leaves.  But this is a totally non-specific insecticide.  The use of this would depend on not having it end up being bee-toxic.  Plausibly, I could take a tip from The Rusted Garden and apply this overnight, washing it off during the day.  I’m not sure how effective that would be.

It would have to be re-applied after rain in any case, but the upside is that it’s easy to apply.  Just shake some more powder onto the leaves.

I’ve seen reports that Surround (Kaolin clay) effectively prevents cucumber beetles from feeding.  But I’ve never used that, and as with diatomaceous earth, this would have to be re-applied after every rain.

The only other approach that looks appealing is to modify those sticky traps to prevent beneficials from entering the trap.  Last year, it wasn’t that I didn’t catch some cucumber beetles.  It’s that I caught all manner of things, many of which I regretted catching.  This year I’m going to look for some sort of mesh that will exclude all but the smallest insects.  Something that a determined cucumber beetle can readily get through, but that a typical bee or butterfly cannot.

For summer squash, so far, so good.  I think I can stick to the plan, grow that for the next six weeks, then tear those plants out.

For cucumbers, the plan is a bust, due to the first generation of cucumber beetles for the year already having arrived.

Right now, I have netting (floating row cover) over most of my cucumbers.  In theory, that will keep the cucumber beetles at bay.  But that has to come off sooner or later to allow the bees to pollinate the flowers.  So, one way or the other, I need to deal with this year’s cucumber beetles.

My plan is to try a few things.

If done properly, both the neem and spinosad should be fairly harmless.  As long as the cucumber plants are small, this is a minimal effort.  But both of those have credible sources stating that they are partially or wholly ineffective against cucumber beetles.  So it’s not clear that’s worth doing, even if it is mostly harmless.

And next year?  I think I’ve learned my lesson.  I’ll either plant cucumbers that are highly resistant to bacterial wilt, or I’ll call it a day and plant parthenocarpic cucumbers that do not need pollinators, and can be grown entirely within a screened enclosure.