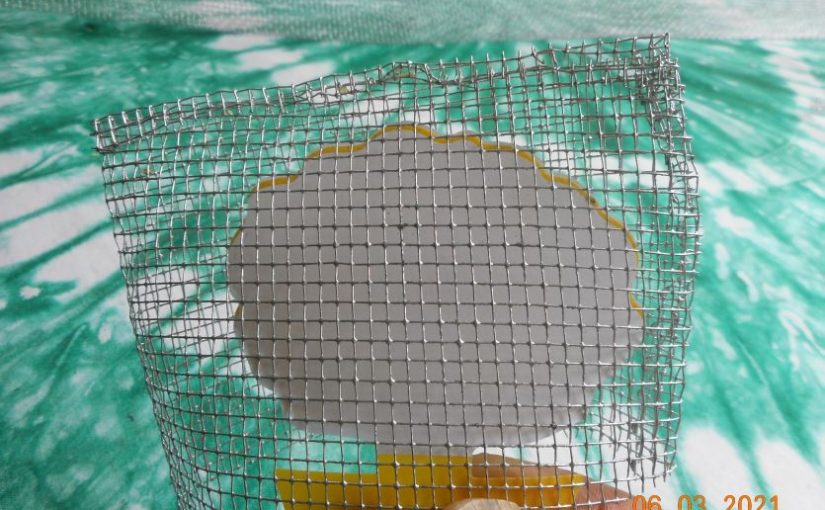 This is a followup to Post #G21-029, where I made some bee-proof cages for yellow sticky traps.  By surrounding a sticky trap with 1/8″ mesh hardware cloth, I hoped to catch cucumber beetles and not catch bees, butterflies, or other beneficial insects.

I set these out in the garden two days ago to give them a test.  But – fortunately or unfortunately, I’m not sure which — the test procedure itself has failed.  I only have a “one-sided” test.

On the one hand, these screens clearly exclude larger insects such as bees.  I have ten sticky traps, two days’ exposure in the garden, and zero bees caught.

Timing and life cycle of the cucumber beetle in Zone 7

The main problem I have with cucumber beetles is that they spread bacterial wilt.  After the cucumber beetles showed up in July of last year, that disease — with a side-order of powdery mildew — killed off my entire cucumber crop.

Instead, I was outsmarted by the wily cucumber beetle.  The little @#$*#s showed up in May this year.  I threw some floating row covers over the cucumbers that hadn’t yet started climbing a trellis.  I started a morning routine of crushing the ones who were in my squash blossoms.  After looking at pesticide options, I punted on pesticides and instead ginned up the bee-proof sticky trap pictured above.

As it turns out, part of the reason I was sure that my plan would work is that I misread information on the life-cycle of the cucumber beetle in this geographic area.  The guidance given by the Virginia Cooperative Extension service out of Virginia Tech says, in part, emphasis mine:

You have to read the material prior to that to see that that those June/July beetles are not the first ones to show up in your garden.  Those are the first generation of new adults.  But in fact, the last generation of last year’s adults over-winters in and around your garden, and emerges in early spring to feed on your cucurbits.  These then lay the eggs that become the June/July generation.

While it may be true that only two generations of adults hatch each year, from the gardener’s perspective, in this region, there are three generations.  The first generation consists of adults from last year that over-wintered.  The subsequent two generations are the children and grand-children of those early-spring adults.

The Maryland extension service is a bit more ambiguous about the life cycle in this area.  They say:

In fact, both Virginia and Maryland recommend the exact opposite strategy from the one I was trying to use.  Their recommendation is to wait until that first (overwintered) generation has passed through, then plant your cucurbits.  If the early-spring overwintered adults don’t find cucurbits in your garden, they’ll go elsewhere.

Finally, it’s fairly important to know that I’ve got striped cucumber beetles, and not spotted cucumber beetles.  Per the Virginia reference cited above, those two species have markedly different habits in terms of preferred plants and reproduction.  Conveniently enough, the striped beetle lays eggs on the stems of cucurbits or in the soil immediate adjacent to cucurbits.

The upshot is that I now have a brief window of opportunity for growing my cucumbers before the next generation of cucumber beetles arrives.

All told, I think this new-found knowledge leads to two or three strategies going forward.

First, this year, I’m going to try to kill the next generation of cucumber beetles by spraying insecticidal neem around my cucumber plants.  (This is the raw neem oil that contains a potent insecticide, not the “hydrophobic extract” neem oil that is simply a horticultural oil without that insecticide.)  This will require a tiny amount of insecticide, because the plants are so small.  It is bee-safe if sprayed when the bees are not active.  And because the striped beetle is so particular about where she will lay her eggs, this has the potential to kill much of the next generation of cucumber beetles that would otherwise emerge in my garden.

This doesn’t solve my problem, because I will almost certainly have beetles fly to my garden from other areas, as happened last year.  But it should reduce the number that I get.

Second, I’m going to do a mid-summer planting of wilt-resistant cucumber varieties, including Little Leaf and Country Cross (a hybrid of Country Fair).  In addition, Little Leaf is a carpenoparthic variety (needs no pollination), so I will have the option to grow those entirely under insect-proof netting.  So, belatedly, I’m going to take the advice that both Virginia and Maryland offered, and start a generation of cucumbers mid-June.

Third, next year, I think the obvious strategy is to grow my cucumbers under insect-proof netting until the first (overwintered) generation of cucumber beetles has passed.  That’s what I’ve mostly ended up doing this year, by accident.  After the initial (overwintered) generation passes, the netting can come off so that the flowers may be pollinated.  And then I’ll proceed with Plan A, and simply tear those cucumbers out when the (second) generation of cucumber beetles arrives in July.

From the gardener’s perspective, in this area (Zone 7), we have three generations of cucumber beetles each year.  The first consists of last year’s adults that overwintered locally.  Those emerge in May.  Their children arrive in early July.  And their grandchildren show up sometime in September.

This leads to a few clear strategies based on avoiding those beetles.

One clear strategy is simply to have no cucurbits in the garden until that first generation of beetles has passed through.  In theory, without cucurbits to feed on and lay eggs on, they’ll fly off elsewhere.  But you’ll likely still have to deal with the second and third generations, if they can fly to your garden from the surrounding area.

A variation on that would be go grow those cucumbers under insect-proof netting until that first generation has passed.  That way you’ll have maybe a four-to-six week beetle-free window in which to get in your cucumber crop before the next generation arrives.

A third option is to do as both Maryland and Virginia suggest, and plant your cucurbits around mid-June.  I think I’d combine that with planting either wilt-resistant varies (Country Fair and derivatives seem to be the most-frequently-mentioned), or planting carpenoparthic varieties that do not require pollination and can be grown under insect-proof netting.

In terms of killing the beetles that you already have, I see a lot less helpful advice.  Various sources suggest pyrethrins, neem, or spinosad.  Pyrethrins are short-lived and non-specific.  For both neem and spinosad, I’ve seen them dismissed as largely ineffective against adults.  (But I suspect that both will be effective against eggs and larvae, hence my intention to spray on and around my cucumbers this year.)

In terms of my bee-proof sticky traps, I’d say the jury is still out, owing to a lack of cucumber beetles at present.  For sure, those mesh cages are excluding large insects.  But to find out if they actually catch cucumber beetles, I’m going to have to wait for the next generation to arrive, sometime in early July.