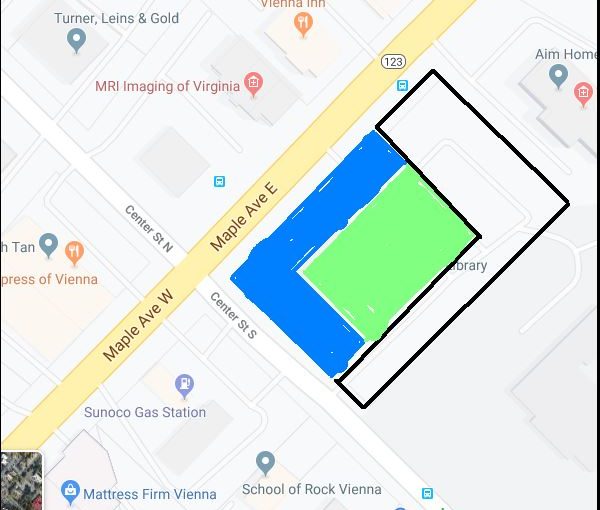 I’ve been avoiding writing about the Town of Vienna of late.  The Town government is in the process of rewriting all the zoning laws, during the pandemic.  There’s no doubt that we’re going to get zoned for a lot more density.  It’s just a question of how dense the Town is going to be.

I’m about a month behind in terms of keeping track of what’s going on with the rezoning.  After the Town got its “economic development” report (Post #1138), I’ve been afraid to look at what’s been happening.

As a way of avoiding that for yet another day, let me get back to writing about the Town of Vienna by talking about the Patrick Henry Parking Garage (and Library).

Fairfax County has chosen the architect for the design and construction of the Patrick Henry Library and Parking Garage.

Fairfax chose the architects more than two months ago, on March 29, 2021.  I can’t seem to find any mention of that on the Fairfax or Town of Vienna websites, but I was able to track that down via Construction Journal.  (My hat is off to them, because nobody else seems to have made this information public.  Or, if they have, I have certainly missed it.  The only other confirmation I can find is a private notice of the Fairfax County original request for qualifications.)

At any rate, the architectural firm for the library will be:

The good news is that a) they’ve designed buildings for Fairfax County before, and b) they have designed some fairly nice-looking libraries. In particular, they designed one in Prince William County that sits atop a parking garage.  That, by itself, makes them about as well-qualified as they can be.

(There was an RRMM architectural firm associated with the Vienna Community Center, but I can’t tell if that’s the same firm or not.  That design-and-build was less than a compete success, with a multi-million-dollar cost overrun.)

Given that Fairfax County has given itself more than $1000 per square foot to build the library portion of this building, they can certainly afford to make it nice.  That’s roughly two-and-a-half times what the Commonwealth of Virginia suggests that a typical library should cost.

Any of the buildings in the RRMM on-line portfolio (see link above) would be fine by me, for the new library.  But I get the feeling that it’s going to be difficult to marry a soaring and airy architectural masterpiece of a library to a two-story concrete parking garage.  My suggestion is to bury the parking underground, and build something nice, as plotted out above (Post #369). That could also be a remarkably cheap way to acquire park land on Maple Avenue (Post #371).  We’ll see if the chosen architects arrive at something like that solution, or whether they are wedded to producing a two-story above-ground parking garage as the centerpiece of the Town of Vienna.

The request for qualifications document is no longer up on the Fairfax County website.  Luckily, the Wayback Machine took a snapshot of it back in January, so I can include a copy of it on Google Drive, which you can download by clicking this link.  The Fairfax County .pdf document seems to require the most recent version of Adobe Acrobat Reader to be readable.

There are some oddities to the scope of work that I was not aware of.  In particular, the Fairfax County Request for Qualifications document says:

Also on the plus side, there does seem to be at least token consideration to what the community would like to see there.  That’s in this phrase in the statement of qualifications:

I only found that out today, so I figured I should put a marker down for that.  I’ve been looking for that over the past few months, and even with that, it took a lot of just-plain-luck to stumble across that information.

Near as I can tell, that information does not seem to be available on the Fairfax County website.  Again, kudos to Construction Journal.  They had that information when nobody else did.  If you’re in the construction trades in this area, it might be well worth your while to sign up for access to that service.

An obvious oddity or two.

I’ll end with what I think are a couple of fairly obvious oddities.  In a Town that officially celebrates Liberty Amendments Month, not a word has been said about the name of the library.  Patrick Henry was a slaveholder. In other contexts, the appropriateness of using his name on public buildings might be discussed.  Even in Virginia.  For example, Patrick Henry Community College considered but rejected changing its name. But as far as I can tell, that discussion isn’t on the radar screen here.  Which, I guess, is fair.  Patrick Henry talked a good game when it came to slavery, but never actually did anything about it personally.

A related oddity is the proposed name change for Wade Hampton Drive.  After somebody pointed out who Wade Hampton was (Post #391), my understanding is that the Town of Vienna was all set to rename that short stretch of road, plausibly after someone who a) wasn’t a Confederate general or b) wasn’t one of the largest slaveholders in the antebellum South.  Or possibly even both.  But that seems to have gone nowhere and/or I’ve lost track of it.

To be clear, Fairfax County government has it on its short list:  “The town has appointed an ad hoc group to look at this street name and consider alternatives,” Fairfax County History Commissioner Anne Stuntz said.  I’d suggest that we name it after some innocuous plant and be done with it.  If you’re bound to rename that street, sometime soon after the 19th of this month would be a good time for it.