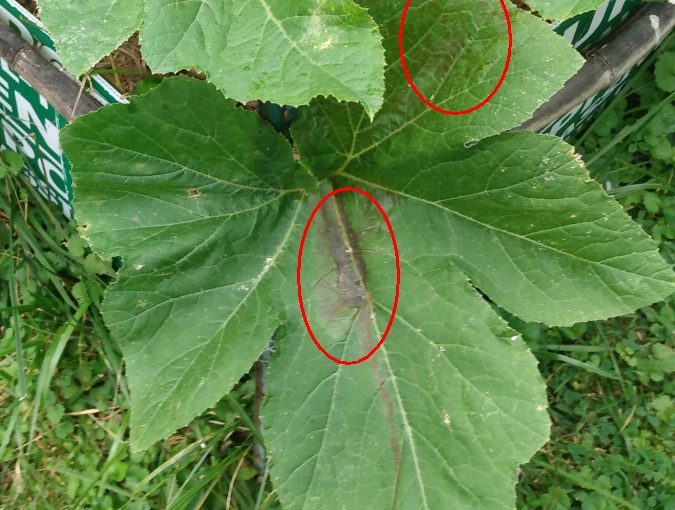 It’s rare to find a plant disease to your garden that can’t be identified with diligent internet search.  This year, however, I have managed to achieve that.

The disease currently killing my summer squash started off as a dark-brown smear on some of the older leaves.  That’s the center of the picture, below.  It also produces a mottled brown discoloration of the leaves. Whatever it is, once established, it seems to respect the leaf veins to some extent.  To the left, it appears to be staying away from the major leaf veins.  To the right, it actually outlines the minor leaf veins in brown. Eventually, these patches die forming the brown spots below.  Those then erode away to form holes in the leaves. FWIW, it has spread to the younger and emerging leaves, though it seems to be somewhat less virulent on those.  It appears to cause all the smaller fruit to abort.   Fruit near maturity continues to grow with no noticeable imperfections.

After looking at maybe 500 pictures of diseased squash leaves, I have yet to come across anything that looks like this, particularly the first picture above.  Closest match seems to be angular leaf spot, but even that is a stretch.

Not knowing exactly what it is, what should I do to try to treat this?  (Rather than simply tear out the existing squash plants and replant with something else.)

I gave it a spray-down with an anti-fungal spray that had reasonable success against powdery mildew (Post #G19).  As far as I can tell, this had absolutely no impact.  None.

That, and the affinity for the veins, suggests to me that this isn’t fungal in nature.  And if it’s bacterial or viral, and well advanced, there’s not much I can do in any case.  Anything that’s even remotely effective is something I don’t particularly want to spread in my garden.

In short, I don’t think I’m willing to go to heroic measure to save the rest of my summer squash season.

For now, I’m just severely pruning the plants.  I’m taking off all the most severely-affected leaves and all of the oldest leaves.  If nothing else, the squash bed looks better for that.

I’m also trying something I saw on YouTube, which is to grow them vertically.  I’d never seen that done with summer squash, but you can in fact tie your squash and zucchini vines to stakes and get the whole plant off the ground.  I’m doing that with the idea that whatever this is, I may have brought it into my garden on the wood mulch that I’m using in that bed.

Meanwhile, last year’s nemesis — the squash vine borer — is nowhere to be found.  Last year at this time, I had a plague of them.  This year, I had one show up a week ago, and none since.

And I still have cucumber beetles.  I managed to find about two a day now, always spotted, never striped. So, as far as I can tell, the idea that we have a distinct cucumber beetle season in this area is a fiction.  We may have higher populations at times, but to date, I haven’t had two beetle-free days in a row since they arrived.

In short, I think cucumber beetles are just a fact of life.  I’ve already lost half of my initial planting of cucumbers to bacterial wilt,  I’ve been replanting with wilt-resistant varieties.  Short of growing them in an enclosed greenhouse, that seems like the sole option.

I probably come across as an incompetent gardener, because all I ever talk about are the problems and the failures.  But that’s not completely true.  It’s just that plants that are taking care of themselves nicely aren’t really worth talking about.

That said, maybe next year’s garden is going to be potatoes, sweet potatoes, beans, tomatoes, lettuce, and root crops.  I have all of those in my garden, and they are all getting along just fine with minimal help from me.  If my cucurbits turn out to be problem children year after year, maybe I should learn something from that.