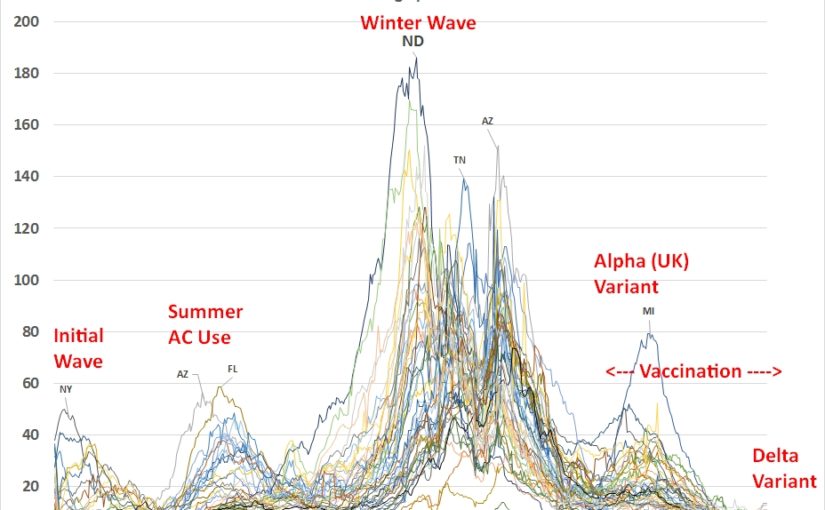 The count of daily new COVID-19 cases in the U.S. has begun to rise.  This rise in new cases is an expected consequence of the spread of the new Delta COVID-19 variant (Post #1162, 6/23/2021).  It might also be helped along a bit by the return to living in indoor air-conditioned spaces in the southern U.S.

Here’s the regional/national graph, in logs (and so, the slope of the line reflects the rate of growth).  I’ve put Florida back into the analysis because they appear to be reporting data five days a week, which is adequate for this purpose. Source for this and other graphs of new case counts:  Calculated from The New York Times. (2021). Coronavirus (Covid-19) Data in the United States. Retrieved 6/28/2021, from https://github.com/nytimes/covid-19-data.”  The NY Times U.S. tracking page may be found at https://www.nytimes.com/interactive/2020/us/coronavirus-us-cases.html.

As you can see, the upward movement is fairly broad-based.  The only region where cases declined in the past week was the Northeast. The initial wave of COVID-19 was largely confined to the New York City region and parts of the West Coast.

After that, starting at the end of June 2020, we had a summertime wave in hot-climate states, attributed to time spent in indoor air-conditioned spaces.  We may yet have a repeat of that, but it will be commingled with the impact of the Delta variant.

The third wave was the wintertime wave, with the high peak attributed to the natural seasonality of coronavirus.  As with (e.g.) flu, this virus appears to spread best in the winter months.

The fourth wave was due to the spread of the U.K. (now Alpha) variant.  Alpha was more infectious than the variants it replaced.  This wave was suppressed by a surge in vaccinations, with daily vaccination rates peaking in mid-April.  There, the numbers suggested that the rate of vaccination (plus existing post-infection) immunity should have been enough to suppress the surge due to the Alpha variant.

And now we’re in a fifth wave, due to an even-more-infectious Delta variant.  This time, however, new vaccinations have slowed, the vaccine is less effective against this variant.  The upshot is that we should not expect this wave to be terminated by the ongoing vaccinations.  This one is likely to stop when enough of the remaining un-vaccinated individuals have acquired immunity via infection.

It has reached the point where the CDC estimates of the Delta variant, by region and state, are now positively correlated with growth in new cases. And by state, it looks like this.  The state analysis is incomplete (CDC doesn’t have data for every state), and the data for that are quite old. Based on the slopes of the linear trend lines, the state data appear to show a vastly higher impact of Delta on case growth, compared to the regional data. That’s an artifact.  The state-level estimates of Delta as a percent of cases are roughly six weeks old.  That’s about three doubling times, or a factor of eight or so.  Because the Delta-as-percent-of-cases is about 8 times too low, the trend line compensates for that by giving the line a slope that is roughly eight times higher.  So, in fact, despite the vastly different numbers, the slopes of the lines agree fairly well.  The difference in the numbers is due to the different ages of the data.

The bottom line of all of this is that we shouldn’t expect this most recent little uptick to be some short-lived fluke.  To the contrary, we should expect the Delta variant to run through the remaining un-vaccinated (or otherwise non-immune) population until something in excess of 90% of the population has immunity to it.  Given the current slow rate of vaccination (well under one million per day now), that’s probably going to occur through lots of infections within the un-vaccinated population.

That conclusion is based on the following: