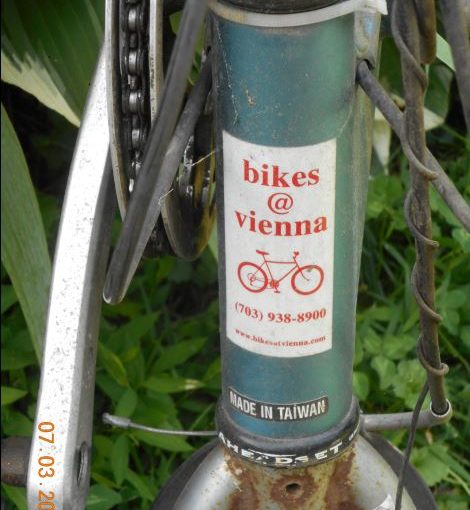 Capital Bikeshare is a short-term bike rental system, currently in the process of expanding in Northern Virginia.  In particular, the Town of Vienna is deciding where to place four (?) Capital Bikeshare stations.  The cost of the stations and bikes will be paid from toll revenues from I-66, so they are “free” in the sense of the capital cost being paid by somebody else.

In theory, the location of the bike racks matters greatly.  Capital Bikeshare is a “docked” bike rental system focusing on short rack-to-rack trips.  Bikes must be picked up and returned to one of Capital Bikeshare’s “docks” (slots in their locking electronic bike racks).  Users may rent a bike via annual membership, one- or multi-day pass, or credit card at time of rental.  Stiff financial penalties apply for failure to return a bike to a rack in a timely fashion.  For the casual user, the first half-hour costs $2, the next costs $2, the third costs $4, and the fourth and higher half-hour increments cost $8 each.  If you (e.g.) use your credit card and accidentally keep a bike outside of a rack/dock for an entire eight-hour day, that will cost you $112.

In other words, this is a bike rental system strongly oriented toward going from A to B, where A and B are Capital Bikeshare racks less than a half-hour bike ride apart.  That makes the location of A and B crucial to the use of the bikes.  To be clear, Capital Bikeshare is NOT a bike rental system for people who just want to ride around for a while and aren’t quite sure of their destination.  Based on their member surveys, their members overwhelmingly use Capital Bikeshare because it’s the quickest way for them to get from A to B, typically a very short work commute.

In practice, however, Capital Bikeshare typically gets so little use out here in the suburbs that it may not much matter where Vienna places its Bikeshare racks.  That was the main finding of my analysis two years ago.  If you have an interest in Capital Bikeshare in Fairfax County or Vienna, VA, you should start by reading my original analysis, in this unnumbered post from 2019.  Two years later, that still stands up as a pretty good piece of analysis.  Among the highlights are the following, all of which are documented in that post:

In addition to those capital costs, the annual operating cost per bike is somewhere around $2000 (2011 data, Wikipedia) to $2800 (2019, calculated from Arlington, VA fiscal report).

Best guess, on any given weekday, in the peak month, the entire Tyson’s Bikeshare network serves about six people/12 trips (2018 data).  That’s with a fleet of almost 100 bikes deployed across 15 racks.

The “use rate” (bike trips per bike-parking slot) of Tyson’s Bikeshare racks is just 6% of the all-metro-area average Bikeshare use rate.

That low use rate was not expected. The 2018 Reston use rate is less than 20% of the level projected for the second year of operation in the Reston bikeshare feasibility study (.pdf).  With this most recent analysis, we know the use rate is not increasing.

The low use rate in Tysons generates an absurdly high cost per trip. My estimate from my prior analysis worked out to an average cost of $25 per bike trip.  That compares to a calculated all-metro-area average cost of just over $3/trip.  Data for Arlington County (.pdf) works out to around $7/trip

Capital Bikeshare is owned by our local governments, but it’s operated by a private for-profit enterprise.  It’s not clear that any entity involved with this has any incentives other than to expand the network regardless of value.

Despite having hundreds of racks placed in this area, there is no standardized process to guide the choice of rack locations.  Every locality gets to decide it on-the-fly. In my last post, I did enough analysis of more recent Capital Bikeshare trip data to show that nothing had changed materially since my earlier work summarized above.  For the Reston area, the number of trips was stable through 2019, then declined in the pandemic.  For the Tysons area, they increased the number of bike racks by 50%, and and the number of trips increased by about 50% in 2019.  In both cases, the value proposition remains the same or worse than it was.

Let me quickly reiterate the (lack of) value proposition at the low Tysons use rate.  Arlington County’s 2019 financial report (cited above) shows an annual operating cost of $2800 per bicycle.  That’s not hugely different from the roughly-$2000-per-bike 2011 figure cited by Wikipedia.  It’s hard to say what it would be for Fairfax County, but I believe the for-profit company that manages the system gets a fixed per-bike fee.  Let’s assume Fairfax’s average cost could be at the lower $2000 figure.  Tyson’s Bikeshare racks were reported to have almost 100 bikes available on July 4 (see just-prior post).  For all of 2019, there were about 5700 trips that used those racks.  When I do the math, that comes out to an average operating cost of $35 per half-mile bicycle trip.  And that’s assuming that all the capital equipment (racks, bikes, kiosks) is free.

The upshot is that by any plausible estimate, the Tyson’s area cost per trip is ghastly.  For example, you can buy a Schwinn comfort bike for $300.  For the estimated annual operating cost of the Tysons portion of Capital Bikeshare, you could give away about 650 of those bikes, per year.  I’d bet that’s far more than the number of people who used those Tysons bike racks in 2019.  You could literally give every user a new bike, every year, for what it costs to supply those rental bikes.

The only thing that’s really new in this whole picture is Bikeshare at Merrifield.   The three racks in that area seem to have an above-average use rate, at least during the peak months of use.  During the peak month, each bike dock sees about one bike trip every four days (0.27 trips per day).  And while that’s a pitifully low rate compared to the racks in the DC urban core, it’s the best of the four Fairfax County areas.

So, the question is, why?  Why does Merrifield appear to outperform the other three regions of Fairfax County?

My answer is that it combines enough apartments and shopping, near metro, that you get a few people to use those bikes every day.   Although there is no personal identifying information on the trip data, you can use some clues to infer what a typical trip was for.  A short trip, during rush hour, involving the Metro station, by somebody who has an annual membership, is probably a Metro commuter.  By contrast, a long round-trip around a Bikeshare station, mostly by non-members, mostly not during rush hour, is probably somebody out running an errand of some type.

That logic is what I’m trying to show in the table below.  This takes all the trips involving Merrifield stations during the peak months of June to September 2019, and tabulates them by start and end points. Probably, an average of three commuters used those bikes steadily to get to and from Metro.  That yielded an average of six trips a day.

But on top of that, there’s another 3.4 trips per day that look like shopping/dining trips to me.  These were either long round-trip excursions from a single location, or people going to and from the Mosaic shopping district.  These were typically not during M-F rush hour, and typically involved a lot of casual (non-annual-membership) users.

The upshot is that the entire Merrifield Capital Bikeshare system served a handful of people a day during the peak summer months of 2020.  Six, maybe?  That was three or so commuters to and from Metro from nearby apartments.  And maybe another three or so shoppers/diners, mostly taking round trips from the Metro or the other two destinations.

And that was enough to make the Merrifield area — with 37 functional bike docks, in three racks — by far the busiest in Fairfax County.

Just to beat that dead horse one more time, if Fairfax really does see a $2000+ per year operating cost per bike, as Arlington does, then for the first full year of operation, Merrifield Capital Bikeshare rides had an average operating cost of $9 per trip.

It’s still cheaper to use Uber.

To my eye, the Town of Vienna has none of the advantages that Merrifield does in this situation.  It doesn’t have a lot of purpose-built Millenial-friendly apartments under a mile from Metro.  In fact, there’s nowhere to build apartments within a mile of Metro.  It doesn’t have a hip Millenial-oriented shopping district with a mile of Metro either.  And ditto on the ability to build one.  All of the synergy that yields that outstanding nine or ten bike trips a day in Merrifield will be missing here.

I would therefore expect to see less use of those racks in Vienna — no matter where they are put — than is currently the case in Merrifield.

So, where should Vienna put those Bikeshare racks?  It just doesn’t matter.  But it would be good to be clear about who is paying for the operating costs of keeping them running.  It’s one thing to waste some other taxpayers’ money.  It’s a different thing entirely to waste our own.