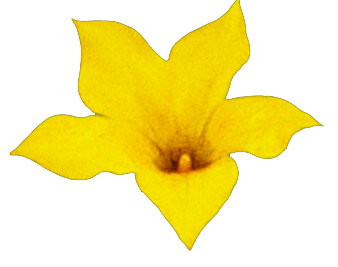 I seem to have solved my problem of having no male squash blossoms (Post #G21-040).  I’m going to write that up because, as far as I can tell, there’s no useful advice on internet on how to deal with the problem.

By way of background, I’m pretty sure that my mature male squash flower buds are being eaten by birds.  Mostly they are being eaten whole, leaving just the stalk, but sometimes I find one that’s just had a large, clean bite taken out of it.

Regardless of the true culprit, putting physical protection around the immature blossoms has protected them so far, from whatever-it-is that was eating them.  The ones that I’ve caged/bagged are surviving.  Those left to fend for themselves continue to be decapitated or torn to bits.

Above you can see two immature male blossoms on a zucchini plant.  One is being protected by a piece of hardware cloth (bottom), the other by a piece of tulle (netting) held around the stem with a bit of velcro–style plant tie (top).  Both approaches seem to be working.

It’s a little ugly when they bloom, as they can’t open fully.  But that also keeps all the pollen in the flower until I use it.  I don’t have (e.g.) cucumber beetles eating up that valuable squash pollen.

One final bit of gardening trivia:  It takes a long time for male squash flowers to ripen.  I never realized that before, because who in their right mind tracks individual squash blossoms.  But, the combination of long time to maturity and a need to protect the buds early in their life means that you have to bag a lot of male flower buds to get one at least one male blossom every day.  Eight is not enough, I’ll be bagging a few more today.  I’ve also taken to picking and refrigerating any spare male flowers for use on days when no male blooms.

Two years ago, if you’d told me I’d be going to this much trouble for a bit of summer squash, I’d have said you’re crazy.  But here I am, tying little frou-frou bags around my squash blossom buds.  I may be a little too Type A for this whole gardening thing. I haven’t seen a squash vine borer (SVB) in my garden since roughly 7/5/2021. But it may be a bit early to declare the end of the SVB season.

In 2021, owing to the hotter weather, the SVBs arrived on June 16 (per this post).  And 7/5/2021 would mean it was just a three-week season.  Based on what happened last year, that’s unlikely to be the end of it.  Probably we’re now in the part of the season where we only see the SVB occasionally.

This year I added a pheromone-based male SVB lure/trap to my defenses.  I can attest that those traps definitely draw in male SVBs, and almost nothing else.

That said, I lost two zucchini plants to the SVB this year.  (Or, rather, I’ve lost two so far).  In both cases, I’d let them trail along the ground, and the successful SVB larvae entered the stems from the part in contact with the ground, where I could neither see it nor spray it.

This clinches it for me, in terms of growing summer squash.  This year I tried staking them up and trimming all the older leaves.  It looks odd, but it makes it easy to spray the entire stem, and surely the air circulation around the plants is a lot better.  In any case, the plants that I staked up all survived the SVB.  The two that I didn’t, didn’t.