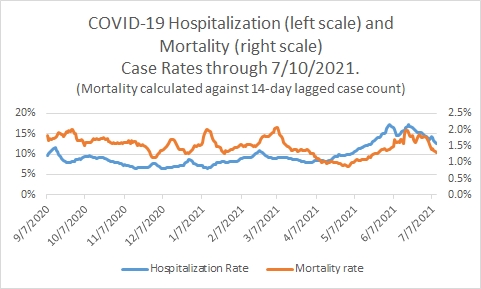 The simple answer is no, it doesn’t.  At least, not as far as I can tell from any consistent and available data source.  Not yet, anyway.  The U.S. COVID-19 hospitalization case rate is not materially different from what it was months ago.  And anybody who makes that claim is probably just making it up.

What about mortality rate?  Again, no.  Not from the data that are available so far.  And for that one, anybody who makes that claim is either making it up, or doesn’t know enough to account for the average lag between diagnosis and death for COVID-19 (discussed below).

For this work, I was getting all geared up to do a sophisticated age-adjusted analysis to account for change in the COVID-infected population over time.  In theory, the average COVID-19 infected individual is younger than was true ase historically.  And because both hospitalization and death are strongly concentrated among the elderly, I expected to see those rates fall.  I was expecting to have to do an age-adjusted set of rates to get an apples-to-apples comparison on the virulence of Delta versus prior variants.

To be clear, there hasn’t been much change in how COVID-19 is treated, over the past few months.  Pretty much everything used to treat COVID-19 has been known and available for a year now.  Based on the state of the medical care, you’d expect to see no change in hospitalization or death case rates.  That is, the fraction of diagnosed who are hospitalized or die.  The only material change in health care has been the vaccines, and overwhelmingly the impact of those has been to prevent infections, and only secondarily to reduce severity of illness when infected in a “breakthrough” infection.)

But in fact, nothing about the crude (un-adjusted) hospitalization and death rates has changed.  Yet.  If you look at the end points of either curve, they are well within the “normal variation” that has occurred over time.  Neither the hospitalization case rate nor the mortality case rate is materially different now from what it has been over the past nine months or so.

I now believe that’s because much of the age shift in new cases occurred before the onset of the Delta variant.  This is now a young person’s pandemic, mostly.  But it’s been that way for a long time now.  And, for sure, there hasn’t been some huge shift in age mix in the past two or three weeks, which is pretty much the extent of the Delta wave so far.  I just can’t lay my hands on a national data file that will allow me to show that.

But wait, if this is still as deadly as before, and causes as much hospitalization as before, why haven’t we been hearing about that lately?

Total case counts have been low.  It doesn’t make the news because there aren’t bodies piling up in morgues, and there aren’t hospitals turning away patients.

Now step back and ponder that in light of the current growth rate of new cases.  In the last two weeks, the situation really has changed, and I don’t think that’s quite sunk in yet.

We’ve got a disease that still kills 1.5% of the people diagnosed with it, and new cases are growing 75% per week.

What in the world is our public health bureaucracy waiting for?  We ought to be hearing alarm bells ringing.

Citation as to source of data and methods

This is one of those questions that is all about the data, and the dates.  Where do the counts come from, how do they count them, and what date are they using to track the information?

Getting a count of newly-diagnosed cases is easy enough, from any of several different sources.  I took mine from the CDC COVID data tracker, show cases as reported to the CDC, by the data when reported to the CDC.  Following the current standard, this is (for almost all states) going to be the sum of positive PCR tests and positive antigen tests, even though the positive antigen test cases are categories as “suspected” COVID.  https://covid.cdc.gov/covid-data-tracker/#trends_dailytrendscases

Getting a count of deaths is likewise fairly straightforward.  Same CDC data source.  These are deaths as reported to the CDC, on the date reported.  Exactly what is included in the death counts is a bit murkier, and you’d need to read the extensive footnotes to the table to be completely clear about what you’re getting.  I’m not giving a URL for this because it’s the same as the one above, just reset to show deaths, not cases.

BUT:  On average, for those who die from COVID-19, it takes about two weeks for them to die, and to have that death reported, following the reporting of the diagnosis.  You can see that by overlaying the deaths and cases data, and see that the peak of deaths follows the peak of cases by about two weeks.  Given that, if the data are shown by date of report, you should divide today’s deaths by the count of cases reported two weeks ago.  Which is what I did in the graph above.

If you don’t do that — if you simply divide today’s deaths by today’s cases — you’ll get an erroneous drop in the death rate whenever there’s a sharp uptick in cases.  That’s because the deaths associated with the newest set of cases haven’t occurred yet.  They’ll occur a couple of weeks down the road, on average.

Finally, it’s hard to get any consistent data on hospitalizations.  Almost all of that information comes out of private-sector state hospital associations.  For whatever reason, it’s hard to get any consistent set of data across all the states.  And when anyone presents that data, they tend to present it as a graph, with no access to the underlying data.   For example, CDC does that — you can get a nice graph of daily hospitalizations, but not a data file.

For hospitalizations, I finally settled on a Federal government dataset, apparently controlled by DHHS, based on individual hospital reporting of new cases.  My guess is that this bypasses the state hospital associations, but with the risk of having incomplete reporting.  Once you get to September 2020, the file shows close to 6000 hospitals reporting on a daily basis.  As I recall, that accounts for more-or-less the entire universe of short-term general non-federal hospitals in the U.S.  That’s why the graph above starts in September 2020.  That file also stops on 7/10/2021.  The data source is:  https://healthdata.gov/Hospital/COVID-19-Reported-Patient-Impact-and-Hospital-Capa/g62h-syeh

Unlike deaths, hospitalizations are shown by date of admission, and so should be very nearly contemporaneous with the count of new cases.  Also, it appears that the suspected and confirmed case counts are a double count, so I have used sum of confirmed adult and pediatric cases from that file.

Finally, I should emphasize that the “case rate” uses the number of diagnosed cases as the denominator.  You’ll see people trying to make the comparison to common flu all the time and mess this up, either intentionally or accidentally, by using some estimate of total infections instead of people actually diagnosed with the disease.  If you are going to compare to flu, you you have to compare case rates to case rates.