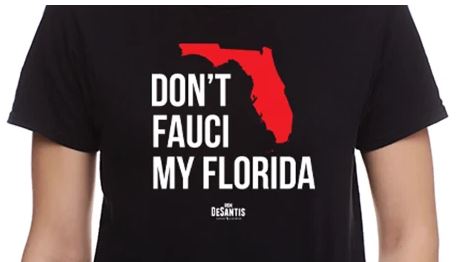 I once said that this fifth wave couldn’t possibly be as bad as the third (winter) wave.  My reasoning was simple.  So many people were already immune, the virus would run out of bodies before it got that bad again.

Now, I’m not so sure.  This wave seems to be combining an extra-infectious virus with some extra-special willful stupidity.  Stupidity at a level that we really haven’t seen in the U.S. since the start of the pandemic.  And in the race between stupidity and vaccination, it seems to me that stupidity is winning.

Just get a little perspective.  Over the course of this, we’ve had:

All of that, and we’re still choosing to attend the school of hard knocks, rather than graduate and act like rational adults.  Every day I read the news, and all it tells me is that the biggest loudmouths still have not learned a thing. All of that, and the best that prominent Republican governors have to offer is the equivalent of fart jokes?  This is the U.S.A.s response to the fifth wave of the pandemic?  And apparently Florida Republicans think that’s pretty damned funny, to boot, because nobody in a position of authority in the Republican party has so much as said this might be in questionable taste, given the current rapid increase in new COVID-19 cases.  Particularly at a time when Florida is, by a slim margin, the second-worst state in the U.S. for new COVID-19 infections.

Before this, I’d have said that we just haven’t suffered enough yet.  Now, I’d have to say that no amount of suffering will make the Ignoranti change their minds, or even do us the courtesy of keeping quiet for a while as the adults try to get this back under control.

To put it succinctly, from where I sit, it doesn’t look like things will be getting better any time soon.

In fact, I can tell you exactly when things will get better.  Near as I can tell, hospital capacity is and has been the sole constraint on the collective stupidity of many of our elected officials.

(Why?  Because red-meat Republicans need that as an excuse to take rational steps to stem the pandemic.  Otherwise, they get a backlash from their base.  And so, because they require the political cover of full hospitals to take action, then, as the night follows the day, action will only be taken once the hospitals have filled.  In effect, they’re all doing their own versions of Florida’s current pandemic response.  They’re just a little less obvious about it.  I laid out the critical role that hospital capacity plays in forcing action by Republican governors in Post #862, then Post #890, then Post #893.  Although, to be fair, Virginia has a rational Democrat and physician as governor, and we’re still sitting on our hands here.  But at least we’re not mocking the seriousness of this).

And so, because we can’t learn from the past, here’s what’s going to happen.  All the know-nothing loudmouths are going to keep at it, fed by foreign and domestic disinformation via social media, enabled by a stodgy public health bureaucracy, and encouraged by a frankly insane Republican party.  Thus the die-hard Republican base will demand inaction.  This constraint means that no one on that side of the aisle can to act early to try to get ahead of this.  Accordingly, we’re going to do nothing major to address the current situation, right on up to the point where the hospitals are full again, and they’re having to stack the bodies in refrigerated trucks.  Again.

Then and only then — maybe — we’ll see this taken seriously again.  Because at that point, even the our Republican governors can point to the bodies in the reefers and say, gosh folks, we know this is just a big hoax, but it looks like we have no choice at the moment.  And so they will finally do the right thing, to the extent that they can, constrained by the virulent ignorance of their base.  Said ignorance having been stoked by social media and prominent denialists on the Right.

In the meantime, if you have anything planned that requires being in indoor public spaces, I suggest you get it done soon.  Or plan on putting it off until we once again start seeing some empty hospital ICU beds on the other side of this one.  I could be wrong, but I don’t see us taking much action until the hospitals are full again.

On the plus side, if you’re vaccinated, your risk of grievous harm seems almost trivially small.

On the minus side, in order to keep the un-vaccinated from harming themselves and others, once we reach the hospital-capacity constraint, restrictions are going to have to apply to everyone.  That’s going to crimp the lifestyles of everyone, vaccinated or not.

Don’t misread me.  I’d love to be wrong about what I’ve just said.  It would be great if, faced with the fastest case growth we’ve ever seen, our elected representatives and public health would leap into action with the full support of the general public behind them.  Quell this last wave before it really gets rolling.  But I think that, by now, that’s pretty clearly unrealistic.

Is it even worth putting up the graphs?  Here’s the new numbers.  More or less the same as the old numbers. Data source for this and other graphs of new case counts:  Calculated from The New York Times. (2021). Coronavirus (Covid-19) Data in the United States. Retrieved 7/21/2021, from https://github.com/nytimes/covid-19-data.”  The NY Times U.S. tracking page may be found at https://www.nytimes.com/interactive/2020/us/coronavirus-us-cases.html.