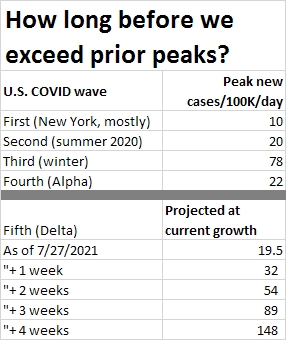 Extrapolating based on today’s data yields the following updated chart.  It’ll be between two and three weeks before we exceed the peak new case rate of the U.S. winter wave. On the plus side, a reader has pointed out that the Missouri counties where this outbreak first took hold have definitely peaked.  Missouri as a state took longer because the outbreak had to spread elsewhere within that state.  But as of today, it definitely looks like Missouri is peaking. Taking that as the pattern, I’m still expecting this wave to last about seven weeks, of which roughly four have already passed.  If that holds, this won’t get much worse than the peak of the winter wave, before it crests.  But if I had to guess, the risk is on the upside.  Given our slow response to the current wave, it would not surprise me if cases continued to rise for some period after that.

Needless to say, this is blind reasoning-by-analogy.  If you can find a more credible prediction, use it.

I’m now going to back to trying to asses the risks, for fully vaccinated individuals.  That’s a tough task, given the findings from Israel discussed in my last post.

On the one hand, if those results are true — if the effectiveness of the vaccines against a Delta infection fades to near nothing in six months — that changes all the calculations.  Vaccines still provide good protection against hospitalization and death, six months out.  But maybe not against infection per se.  And if vaccinated individuals can spread Delta fairly well if they are infected, that changes any “herd immunity” type calculation.

On the other hand, if those are spurious, and the world looks like the British results — immunity holds up well through six months — then the world is pretty much as I have described it in past posts.  Get vaccinated, and consider this pandemic a Darwin test for the unvaccinated.  And calculate your odds (of infection, hospitalization, death), and act based on your risk tolerance.

No matter who is right, it would be prudent to get yourself some N95s now, while they remain available through standard retail channels, if you don’t own some already.