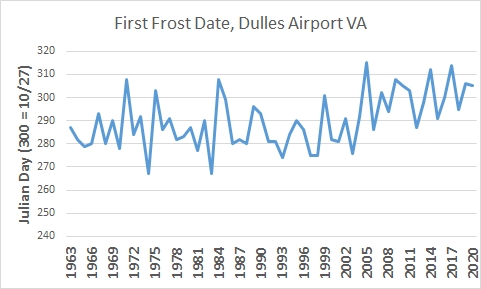 Over the past two-and-a-half decades, our fall first-frost date has been getting later.

That’s not really a surprise.  Global warming and all that.  Temperatures are rising slightly in most of North America.  Among other things, the USDA hardiness zones have been shifting consistently northward.

The surprise here is the rate at which our first-frost date is changing.  In Fairfax County, it’s been getting later at the rate of about one day per year.  That may not not sound like much, but it means that our typical first-frost date is more than three weeks later than it was back in the 1990s.

I found that to be a surprisingly rapid change, so I thought I’d post it.

And then, maybe if I’m still feeling the math, I’ll work up the likelihood that this year will have the latest first-frost data on record for Fairfax County, VA.  But muse of math seems to have abandoned me, so that will have to be a separate Part II of this post.

Today (10/24/2021) is our expected first-frost date here in northern Virginia, hardiness zone 7.  At least, that’s what some almanacs say.  It’s our expected first-frost date because, for the period 1990-2010, a frost occurred on or before that date just 30% of the time.  That’s the arbitrary-but-most-commonly-used definition of “the” first frost date.  The actual date is based on historical records from a nearby weather station or set of weather stations.  Details are in Post #G21-054).

But this year it has barely even gotten chilly yet.  In our household, you might need a blanket to sleep comfortably, but we haven’t turned on the heat.  Based on the current ten-day forecast, nighttime lows will be in the high 40’s/low 50’s F through 11/2/2021.  This year, the first frost date will clearly occur some time in November.

That raises two obvious questions.  How likely is it that the first frost will occur that late, in this area?  And, more generally, what’s been happening to that first frost date over time?

It takes some effort to be able to use the data.  You have to be able to identify  individual weather station or stations your area of interest.  You can then select and download the data from the NOAA website.  After which, you need to read it into your data analysis program of choice, anything from an Excel spreadsheet to dedicated statistical analysis software.  And then have some clue as to what you want to do with it.

In my case, the choices were fairly straightforward.  I first listed every NOAA-registered weather station that ever existed in or around Fairfax County.  Of those, only a few were still operating, and had enough history to allow me to look for changes in the first-frost date.  Of those available, I chose:

The last one is there only because that’s where I live.  The others are professionally-run weather stations with a long and known-consistent series of temperature observations.

In a more sophisticated analysis, it’s possible to piece together many different weather stations to arrive at a much-longer, yet still-consistent, temperature time series.  To do that, you figure out how the various recorded temperatures relate to one another, for their periods of overlap.  (E.g., Vienna seems to run about a degree F warmer than Dulles, on average).  Then you adjust them all to a common basis (e.g., you’d drop the reported Vienna temperature by a degree).

Scientists who study global warming use that same sort of inter-thermometer comparison to pick up and adjust for changes in individual thermometers.  (E.g., new equipment replacing older equipment, or new locations for existing equipment.)  The trick there is that the temperature trends in nearby thermometers are extremely highly correlated.  So if I were to (e.g.) see temperatures in Vienna suddenly jump up by two degrees, relative to other local weather stations, I could be pretty sure that was due to a change in the calibration of the Vienna thermometer.  And I would adjust it downward, accordingly.

In any case, I’m not doing anything that sophisticated.  I’m just picking off the first fall day on which each of these three thermometers recorded a freezing temperature.  And then tracking that date over the years. By eye, it’s pretty clear that the behavior of that time series changed in the mid-1990s.  Before then, there was no warming evident.  After that point, the first-frost day began to slip later and later into the year. For my gardening purposes, I don’t really have to care why that number is changing.  It’s enough to know that it is changing, and that those changes appear to be quite uniform and persistent.  That is, I can use that pattern to refine the crude “almanac” prediction of first -frost date.

That said, I’ll point out that this is plausibly part of the large picture of global warming.  Really, just to be clear that the odd timing of this doesn’t rule that out.

For the globe as a whole, warming didn’t really take off until the 1970s.  And warming is far from uniform.  There are much higher rates of warming nearer the north pole, much lower rates nearer the equator, and high warming at night relative to during the daytime.  In the end, it all depends on a lot of details, and those details can result in substantial differences in the rate of warming across geographic areas.

That’s all by way of saying that it doesn’t particularly bother me that the warming isn’t apparent until the mid-1990s in Virginia.  I don’t know whether Virginia’s warming is or isn’t a consequence of overall global warming.  But I do know that I can’t rule that out based on the timing.  It’s just not a neat, orderly process.

But maybe what I’m seeing at Dulles is some sort of artifact.  Maybe that’s just an urban heat island effect due solely to development in the Dulles area.  And maybe it just doesn’t apply out here in Vienna, where the Town has been fully built-up for nearly half a century.  (Though a) the density of development literally at the airport is nil, and b) that Dulles area was being developed well before 1995).

That said, let’s see how the trends compare with the other two thermometers.  Presumably, if that temperature trend is all due to local development at Dulles, we won’t see much elsewhere. The first-frost dates from the Sterling, VA weather station clearly show the same upward slope as those at Dulles.  By the end of the time series, the dates are virtually identical. And the short time-series from Vienna, VA also mirrors that upward slope, though the agreement is not as exact as it was between Sterling and Dulles.

So, the slippage of the first-frost date appears real, and it appears to be broad-based across Fairfax County.   In short, I think we can rule out any sort of unique  “heat island” explanation for the change. We’re getting the same upward slope in three locations that saw very different amounts and placement of new development over this period.

With that, it’s pretty clear that this is an ongoing change in the climate of Fairfax County, VA.  We can argue about whether or not this is part of overall global warming.  But it’s pretty clearly not due to some simple technical glitch or explanation.

The big surprise is just how rapidly that change has been occurring.  In the next graph, I isolate the 1995-to-date period, and let Excel fill in the linear trend. In short, in Fairfax County, first frost has been falling later and later, at the rate of almost one day per year.  Based on the two specific dates (chosen to be near the trend line), our first-frost date has slipped 21 days in the past 23 years. It’s no surprise, then, that first frost is coming later.  The only surprise is how rapidly that has been changing since the mid-90s’.

Meanwhile, back in the Town of Vienna, there’s no such thing as a fresh November cabbage.

Today my wife and I went to a local farmers’ market to pick up some nice fresh cabbages.  I wanted them for sauerkraut (Post #G29).  Farmers’ market cabbages are much superior to the ones available in the grocery store, for that purpose.  And they are cheaper, to boot.

We can’t shop at a farmers’ market on Sunday in Vienna.  It’s not that we have Blue Laws, it’s that the Vienna recently evicted our local Sunday farmers’ market.  That market had moved to a disused church parking lot during the pandemic, and, after being evicted, that market successfully moved back to its pre-pandemic home at a local high school.

We duly followed it there and purchased some fresh cabbages.  On a Sunday.

More to the point, there’s no fresh cabbage at all in Vienna after October 31.  The market that got evicted is a year-round market, as are a few other farmers’ markets in the area.  But the only farmers’ market now remaining in Vienna is a legally-sanctioned monopoly operating on public property, operated as a fund-raiser for a local charity.  And that market must, by local ordinance, shut down at the end of October.

(That’s Sec. 18-154. – Display of merchandise.  As I read that, it permits the use of public property for only one farmers’ market in Vienna.  That section of the law does not address markets not held on public property.)

As a result, come November, the only option for fresh produce is to travel out-of-town.

Near as I can tell, the final date for the (only) Vienna farmers’ market is a matter of long-standing tradition.  It has ended in October for nearly three decades now.

My wife informs me that this was, in fact, a Fairfax County farmers’ market, and really had nothing to do with Vienna other than nearby location.  This one eventually moved and became the Oak-Marr farmers’ market.  Which, thirty years later, is still held on Wednesdays, May to October.

My only real point is that the climate has changed, but tradition and law have not.  Apparently, the current Vienna farmers’ market runs through October because, once upon a time, the Fairfax County market that eventually became the Oak-Marr farmers’ market ran for that period of time.  And the dates stuck.

But now, the open-field growing season is now (nominally) three weeks longer than it was when that end-of-October date was fixed.  And technology has changed, with poly tunnel greenhouses being a common sight in both the Northern Neck of Virginia and in the Maryland/southern Pennsylvania areas where much of our local produce comes from.

Even now, it’s not as if October 31 is written in stone.  The last time I looked at this issue, I tabulated the end dates for several local farmers’ markets.  This is based on websites for Falls Church, Fairfax City, and Fairfax County farmers’ markets.

My guess is, give it another decade or two, and even my local government will notice the increasing mismatch between when commercial farmers can grow crops locally, and when they can sell crops locally.  Or, at least, sell them within the boundaries of the Town of Vienna.

Finally, it’s probably worth the time to bring up exactly why these farmers’ markets are of such value to the sellers, let alone the buyers.

The fact is, direct farmer-to-consumer produce sales are ridiculously inefficient in terms of labor, transportation and fuel costs, permits, and just about every other physical or legal aspect you can think of.

But the higher per-unit revenues make it work.  For every dollar’s worth of vegetables bought at the grocery, farmers collect maybe 25 cents.  If they can  sell produce directly to consumers at anything  near a grocery-store price, they collect several multiples of what they’d get from the industrial food chain.  That higher per-unit revenue pays for a lot of diesel and a lot of work hours.