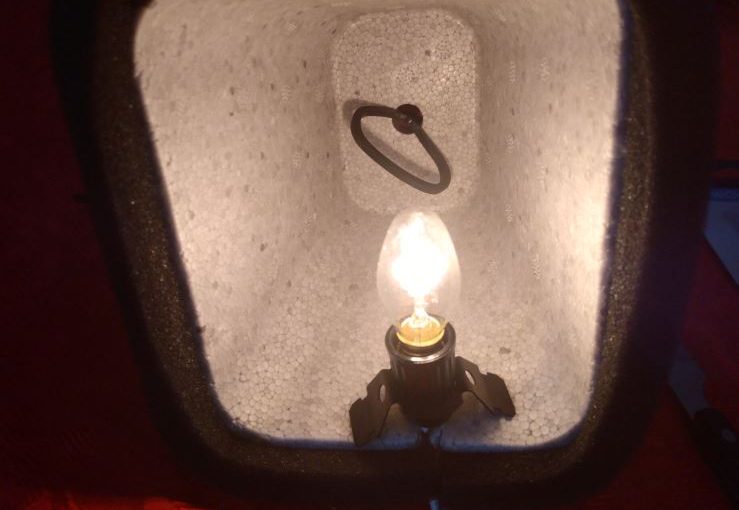 This post shows you how to take a few off-the-shelf parts from your local hardware store and make a plug-in heated cover for an outdoor faucet.   This will take you about two minutes to assemble, and will cost you about $17, including some spare light bulbs.  The only tool you need is a knife.

It’s not rocket science:  Add a candelabra-bulb socket to a standard foam faucet cover.  Screw in a night-light or similar incandescent bulb.  Hang it on the faucet.  Plug it in.  You’re done.

I was motivated to install one of these by a recent 11F night, after which water would only trickle out of my outdoor faucet, suggesting it was very nearly frozen solid.  Given the damage that a burst pipe can cause, this seemed like a cheap bit of insurance.

I guess the target audience for this post is people like me:  Southerners, facing a few bitterly cold nights a year, who would rather not mess with trying to winterize their outdoor faucets the proper way.  I’d rather run an extension cord to the faucet than hope that the 60-year-old sillcock shutoff — that hasn’t been used in at least 30 years — will work without leaking.

The only value added I’m bringing to this, other than pointing out the obvious, is that I’ve tried three wattages and recorded the results.  Having tested it, you can be assured that you’re not going to end up with a flaming piece of styrofoam attached to your house, and you can pick the wattage that meets your needs.

The long and the short of it is that even a 4 watt incandescent bulb is adequate for any nighttime temperature I might expect in Northern Virginia.  The 15-watt bulb was clearly overkill, so I’m not even going to include it in the parts list below.  YMMV.

I think that seven-watt night-light bulbs are almost universally available.  The only constraint is that, for the wattages listed, they have to be old-fashioned incandescent bulbs.  You’re using them for the waste heat, not for the light. Instructions:  Use the serrated knife to cut a small (1/8″ wide) slot in the bottom of the Styrofoam faucet protector.  Bend the metal fitting that comes with the candelabra socket to spread it out a bit.  Press the cord for the candelabra socket in place.  Snug it up.  Screw in the bulb.  What you see below is the inside of the faucet protector, fully assembled and lit. One clear drawback is the need to run an extension cord out to the faucet cover.  But, with a power draw so low, the cheapest, flimsiest outdoor extension cord will do.

You might want to wrap any junctions (e.g., where the extension cord and lamp cord meet, or where the switch is on the lamp cord) with electrician’s tape or other waterproofing material, depending on how exposed they are.  Otherwise, that’s it.