With apologies to Hornsby, the long-suffering pig of Marshall Road.

In the prior post, I suggested that survivors of coronavirus should be treated as the seed potatoes of our economic recovery.  In this post I use a different agricultural analogy entirely.  I’m going to explain a classic economic model that I think will apply to those who haven’t been infected with coronavirus yet.  At least in a few States.  That is the model of the hog-slaughter cycle. 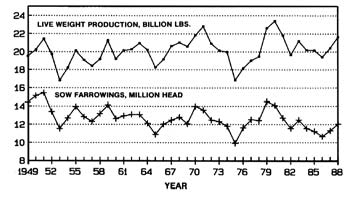 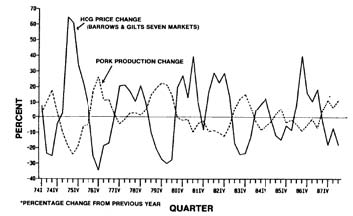 As an economist, your early training focuses in the easiest case to understand, that of perfect markets, with perfect information, and rational actors.  In other words, a) no one buyer or seller has any power over the prices to be paid, b) everything about the market is publicly known and, c) everybody behaves in a rational (i.e., profit-maximizing) fashion.

In such a market, there’s almost no way to justify any predictable changes in prices.  If the price change were predictable, people would act to offset it.

And so, there’s no place for any type of regular, cyclical behavior in prices, other than what could be justified by (say) additional storage costs of commodities for off-season use.  Something that is continuously produced and consumed should show no regular, repeating changes in prices over time.

It’s hard to find markets that come closer to that ideal that the markets for agricultural commodities.  For the typical commodity, there are numerous small producers.  There are functioning national and international markets that both price those in current terms, and offer “futures” so that companies can lay off risks of future price movements.  And there are typically enough buyers that no one buyer can materially manipulate prices.

Enter the hog-slaughter cycle, pictured above.  It is well-documented that the prices of hogs do, in fact, vary in a quasi-regular fashion over time.  As does hog production.

For a while, this drove neoclassical economists nuts, so it was a well-studied phenomenon.  So much so that it formed the basis for much of my graduate course in time-series analysis.  That was taught by one of the guys who first documented, beyond a doubt, that the wiggles that look like regular cycles above are, in fact, regular cycles.

In the end, the presence of this cycle was attributed to three things.  First, pigs are prolific.  The production of hogs can be changed fairly rapidly.  Sows have litters of piglets, so one pregnant sow can produce a dozen hogs-to-be.  (As opposed to cattle, say, born one-at-a-time).  Second, there’s a lag between cause and effect.  A farmer’s decision to breed more sows results in more finished hogs some time later.  (I vaguely recall that it’s something like 18 months, but I’m a little rusty on pig biology).  Finally, the economic actors are somewhat short-sighted.  They look at today’s price for hogs, to determine whether or not to breed more or fewer sows.   And they aren’t really able to base their current decision on some sophisticated guess as to the price of hogs a year-and-a-half from now.

And so, here’s how the hog cycle works.  It starts out with things looking pretty good.  Hog prices are up, and it looks like producing hogs is a profitable thing to do.  So, independently, farmers across the country put more sows into production.  Then, things start to go sour, profit-wise, but you can’t yet see it, because there such a lag between the start and the final outcome (breeding the sow and selling the resulting finished hogs.)  But, ultimately, the bad news comes out.  A surplus of hogs hits the market, depressing the price of hogs and reducing farmer profits.

At which point, the whole cycle goes into reverse:  Fewer sows bred, fewer hogs to market, rising hog prices.  And we’re back to the start of the cycle again.  Resulting in the graphs you see above, of hog production and hog prices.

Early removal of coronavirus restrictions as a classic hog-slaughter  cycle.

It’s now apparent that Georgia, at least, is going to start removing restrictions on its population, starting more-or-less now.  This, despite many experts saying that it’s far too soon.  Given the Governor’s rhetoric, it’s fairly clear that this is driven by ideology, not science.

What’s less clear is that this move is driven purely by economics.  This isn’t a case of belief in individual liberty trumping scientific judgment.  It’s a pure dollars-and-cents issue.  Many businesses need a population of coronavirus-immune consumers and workers, or they’ll go under.  That includes pretty much all of the personal-services sector, plus travel, tourism, sit-down restaurants, bars,and many types of non-essential goods retail.

Those businesses plausibly can’t wait the 12 months until a vaccine is available.  Apparently, they can’t even wait until the number of cases in a state has stabilized.  They want that now.

As noted in my seed potato post (#G00), we are slowly producing that coronavirus-immune population naturally, as more individuals are infected and recover from the disease.  It is apparently common for younger individuals to have mild or no symptoms.  A recent screening in LA County showed that about four percent of the population now has antibodies to coronavirus.

But this is a slow process.  That’s the whole point — to slow the rate of new infections so that you don’t overwhelm the hospital system.

Removing the restrictions then has a two-fold benefit to the affected businesses.  It provides some customers immediately, and it will increase the speed at which we produce the coronavirus-immune population.  The downside of that, of course, is that this occurs because the rate of new infections will (almost surely) increase as these restrictions are lifted.

The Georgia government may think that it is doing this prudently.  I am sure that they have in mind some sort of linear, step-at-a-time approach.  Lift the restrictions a bit, business resumes a bit, the infection rate goes up a bit, the number of deaths goes up a bit.  Then when that works out OK, lift it a bit more.  And so on.  Always with an eye toward not letting this get out of control and overwhelming their hospital system.

That way, they can simply trade a few additional deaths for a better economic outcome.  They’ll never say that, of course.  But that’s the bottom line.  It might not even be irrational, if there are few enough additional deaths, and a great enough economic benefit.  (But given that the decision appears based on ideology, it’s a fair bet that nobody there has done even the most basic arithmetic to see if that’s even remotely plausible. )

But I bet that what they get is not that nice, linear progression.  They’re going to get a hog-slaughter cycle.  At least, this certainly has all the elements.  A prolifically reproductive creature.  Long lags between decisions and outcomes, relative to the that creature’s life-cycle.  And short-sighted economic actors.

Lift the restrictions a bit — and two or three weeks later, you may have some idea what that did.  Or you may not.  You may be able to put that particular phase of the genie back in the bottle.  Or maybe not.  And you may have already gone on to phases II, III and so on, before you even have any feedback on what the effect of the initial easing was.

We’ve seen what it takes to bring this epidemic to screeching halt.  It takes what they did in Wuhan — a complete and total shutdown.  Here, we do this-n-that, we suggest, we encourage, we keep the bulk of retail open for business.  (And make excuses for businesses that won’t require masks.)  And now, selectively, some states are removing even those mild approaches, far earlier than public health experts say is warranted, given current conditions in those states.

Just to keep this in perspective, here’s Wuhan (left) versus Virginia (right), as of a couple of weeks ago.  The 12-day markers all denote the point at which the Commonwealth took some restrictive action (or the CDC changed guidance). Tough for me to fathom what, exactly, they expect to happen in Georgia.  And when, exactly, they’ll know it’s gone sideways.  And how long, exactly, it’ll take to get their rate back down to where it was when they started.

But maybe that just doesn’t matter.  Just think of your citizens as a farmer thinks of hogs.  First and foremost, they are a factor of economic production.  They are a resource that needs to be put to use.  From that perspective, the only minor distinction is that hogs were born to be slaughtered.  In terms of the arithmetic of the results, I’m betting there’s not a lot of difference.

Now doesn’t this make my seed-potato concept seem positively humane, by contrast?   At least in that case, people choose to be infected and you concentrate on the lowest-risk population.  If the driver here really is the economic need to speed up the creation of a coronvirus-immune consumer and worker population, that seems like a much better way to go about it.

If you want to see a simple-minded explanation of why the decision to cause more deaths, in order to reduce economic losses, is probably inefficient, see Post #571.