Not everything in my garden is a problem.  I just tend to talk about the issues that I’m trying to solve.  I’m attempting to achieve some balance here.  Topic below, in order, are: Deer:  Apparent success with chemical repellents and physical “scare” devices.  I really like sunflowers.  So do deer, apparently.  I was unaware of that when I planted several hundred square feet of sunflowers.

But with a few modest changes to the yard (piling brush in their preferred path), Bobbex deer repellent, a Yard Enforcer, and a couple of home-made deer-annoyance devices built around a cheap motion sensor (Post #G07),  they are leaving my yard alone.  For now.

All that trouble because I didn’t want to fence in my garden.  Beyond the trouble and expense, a sturdy deer-proof fence would have defeated my purpose in doing a mass planting of sunflowers.   Which was to have one pretty thing in an otherwise food-oriented garden.

Best advice I read was to try to get inside the deer’s head:  Deer live in fear.  It’s their lot in life.  They get used to it.  If you want to scare the deer away, you have to work at it, because they are full-time pros at that game.  The goal is to make the deer as uncomfortable as possible, as many ways as you cheaply can, and you want to keep changing things around so that they don’t get used to them. Hence, the above.

If I had to apportion credit, I’d say that Bobbex is the primary deterrent.  That’s the first thing I tried, and that’s the last time I saw deer damage.  That has to be re-sprayed at two-week intervals or less.  And it can’t be sprayed on anything you’re going to eat (because it stinks).  But it only takes an ounce of concentrate at a time, for a garden the size of mine, so it looks like a $20 bottle of that will last the season, more-or-less.

After that, all I can say is that the Yard Enforcer (motion-sensing sprinker) works reasonably well, with some false triggers in the afternoon sunlight.  But once the plants get tall, it really can’t get to the deer.  I know this by, of course, forgetting to turn the thing off before walking into the garden.  Now I can shelter behind any number of trellises or sunflower beds and not get wet. Birds:  Limited success with row covers and netting.  No success with decoy predators.  Crows love to pluck up sunflower seedlings.  I managed to keep them off my sunflowers this year, first with floating row covers, then with bird netting.  That was a fairly labor-intensive, because I set up a framework to suspend the netting above the plants.   Birds were smart enough to steer clear of the netting that was clearly suspended above the ground.  So that worked, but was a lot of effort.

I also have a problem with birds eating my wineberries.  Tried decoys (fake owl, fake snakes), moved them around daily as directed.  If they had any impact, I didn’t notice it.  There’s no way I’m going to cover the berries with netting because, in that setting, I find that the birds get caught in the netting.  And who needs to deal with that. 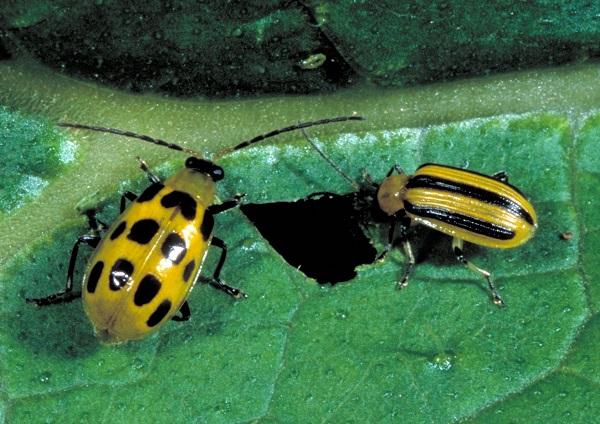 Source:  University of Kentucky College of Agriculture, Food and Environment.

Cucumber beetles:  Apparent success with a simple manual method.  These tiny little suckers spread bacterial wilt to cucumbers.  So they are small, but they can have a big impact, because bacterial wilt is incurable and kills the cucumber vine.

There are many methods mentioned for dealing with these.  A lot of them were either too non-specific (pesticides), to labor-intensive (inspect all your cucurbits for these tiny things and try to squash them), or too untried.

But, as it turns out, these little pests have one bad habit:  They like to spend the early morning lazing around inside squash blossoms. Where you can easily reach in with a pair of long-nosed pliers and crush them.  This is vastly more efficient and effective than trying to catch them during the day.   The sole difficulty is dodging the bees.  My scores for the past five days

Either the word has gone out in the beetle community to ixnay on the ashsblossomsquay, or I’ve managed to reduce my local pest population to a negligible level.  In five+ days of using this method.

I’m not a fan of hand-picking bugs because it’s tedious, labor-intensive, often ineffective, and fundamentally unpleasant.  This, by contrast, is clean, fast, and seems to work like a charm.  At least in my garden, with a fairly high ratio of squash to cucumbers.

I picked this trick up on Youtube, but unfortunately I can’t seem to find that video to give appropriate credit to the originator.

Squash vine borer:  Spraying stems with spinosad, nothing is dying yet.  The SVB is still here, as of yesterday, making this the first day of the fourth week of our week-long Virginia squash borer season.  (See Post #G09 for more than you want to know about this pest.)  Conventional wisdom is that the SVB might be around for a week or so.  After which, it’s safe to replant squash.  But, curiously, I could not find a credible (professional) source that would state the likely length of the SVB season in this area.  And now I know why.

Had I known the actual length of the SVB season — apparently, more-or-less the same as was documented for New Hampshire above — I’m not sure I’d have undertaken to save my squash plants by spraying spinosad roughly once-a-week.  Even if the SVB goes away today, I have to keep spraying for two more weeks, waiting for the eggs to hatch.

Sure, spinosad is a short-lived poison approved for organic gardening, and bee-safe if applied with caution.  (Particularly true in this case, as I only spray the stems, not the entire plant).  But poison is poison, and it’s a drag to have to spray every five days or so, and to time harvests to occur just prior to spraying.

That said, I’m starting to think that a policy of doing two crops of summer squash may make the most sense.  This is another tip I saw on Youtube and now cannot find again.  This was from a gardener in Arkansas (roughly same climate as here) who plants early, then mows down her cucurbits around July 15.  Then replants from seed around July 30.  And thereby dodges most or all of the problems that I’m facing now.  And has her main summer squash crop in the fall.

I’m going an awful lot of spraying, pruning, monitoring, and so on, for what amounts to a few tens of dollars of produce.  Produce that is readily available in our local farmers markets at this time.  That makes the whole two-crops-a-year-and-let-the-bugs-have-the-garden-in-august method seem pretty sensible.  Substitute $4 worth of seeds for the cost of the chemicals and the time needed to help the squash plants limp through this tough period.

No dice, so far, on the baking powder/oil/soap spray detailed in earlier posts.  Perhaps I’m not diligent enough.  Perhaps is more of a preventative than a curative.  But I’m not willing to step up to actual fungicides around stuff that I plan (or at least hope) to eat.

I have come to learn a lot more about how to grow squash well, from The Rusted Garden, done by a Maryland gardener.  His Youtube presentations are spectacularly good, clear, and sensible. For example, he shows how to titrate the soap amounts in a smothering oil spray, something I have not seen before.  (Everyone else just gives a formula, but he correctly notes that the amount of soap required will depend on which exact soap you use.)  He also replants cucurbits around this time of the year if they get too “beaten up” by the various pests attacking them, a variant of the “two crops” approach mentioned above.

Among other things I’ve learned is that you really should prune your summer squash — something that literally had never occurred to me to do.   And when I did, I managed to find not one, but two stealth zucchini, both in the five-pound range.  So, on the upside, my squash plants have actually been more productive than I thought.

But so far, the mildew is winning.