Warning:  This is just the background.  I don’t get around to making these until the next post on this topic, which will occur after I’ve gathered the needed materials.  To see the wood DIY version of these, look at the Post #886.

My last post presented plans for a practical way to allow wheelchair users to transition easily from from floor to chair and vice-versa.  The key insight — from a wheelchair-using friend — was that all you need is a broad, shallow set of steps, and a couple of “push up bar” handles (like these, say).  Portable handles vastly simplify the construction, relative to a device with built-in hand-holds or railings.

My friend reports that this combination of stairs-plus-portable-handles has increased her mobility.  Which, apparently, is high praise indeed.

For many people, constructing that set of stairs may not be possible.  While the carpentry wasn’t complicated, it required space and tools adequate for cutting up a full sheet of plywood.  The final result was nice, but what good does that do you if you can’t obtain one?

Today’s post goes in the opposite direction:  Volkssteppe.  The people’s stairs.  I’m going to work out how to create the same functionality using tools and materials that almost anyone can easily obtain and use.  It may not look as nice or last as long.  But it will work just as well as the original.

In this post, I use this as an opportunity to present some systematic analysis of this particular construction problem at hand.   I’m not actually going to produce a working set of stairs using this new approach until the next post on this topic.  The reason is that I need time to gather the materials and work out exactly what I’m going to do.

After looking over the options, the obvious choice of material for this project is corrugated cardboard.

When I say “cardboard furniture”, I’m guessing that many people immediately dismiss the concept.  They’re thinking in terms of a cardboard box with a tablecloth spread over it, or some sort of spindly little table.

You might be thinking that cardboard can’t possibly be strong enough for this use, right?  If so, think again.

Virtually everything you own, short of an automobile, was packed, protected, and shipped in corrugated.  Heck, not only do we ship almost everything in corrugated boxes, Ikea is now shipping those boxes on corrugated cardboard pallets.   (That idea isn’t even original — corrugated pallets have been in use for more than two decades.)

If you still don’t get it, just Google “corrugated cardboard furniture” and look at the examples.

Or maybe watch this guy jumping up and down on his cardboard chair, at 3:50 into this YouTube video:

So, with a bit of planning, there’s no doubt that the average person can build a set of cardboard stairs strong enough to support an adult.

Now let me briefly list the advantages of corrugated cardboard, relative to almost any other alternative.

Too many choices for method of construction.

For these stairs, I am sticking to the basic footprint and form outlined in my just-prior post.

I am also sticking to the “carcass and skin” approach of the prior model.  That is, I’m going to build an ugly, functional structure (the carcass), then add a nicer-looking surface on top of that (the skin).  This lets me be as crude as I want to make the functional parts of the structure as strong as needed.  In this case, the “skin” will be large sheets of blank cardboard, covering up the internal details of the construction.

Beyond that, there are any number of ways to build a completely functional set of steps.  There are simply too many choices.

And there is surprisingly little systematic guidance on the engineering of cardboard structures.  For a material that is everywhere, and used for packing just about everything, I could find no systematic engineering guidelines for using it in construction.  No rules-of-thumb as to how much weight a piece of corrugated cardboard would support.  And so on.

And after examining a few boxes, I think that part of the reason is that corrugated comes in a wide range of thicknesses and weights.  There is no one standard corrugated cardboard to use as a reference.  Hence, there’s little standard guidance on using it.

That said, I’m basing everything below on a medium-sized carton from Amazon, which turned out to have walls that were 1/8″ thick, and weigh in at just about 1.6 ounces per square foot of cardboard.  Or, conveniently enough, one pound for every ten square feet.

A nosology of cardboard furniture construction

Even if I can’t find a good engineering guide, I can at least try to categorize the various techniques used to make strong cardboard furniture.

With this method, you build a solid block of cardboard, in the desired shape, by stacking up cardboard sheets cut to shape.   For strength, the sheets would be vertical, with the corrugations (channels) running vertically.

This approach clearly could generate a set of stairs strong enough to support a person.  If in doubt, review the YouTube video cited above.

The main problem with simple stacked sheets, for this project, is the sheer amount and weight of cardboard required.  Assuming zero waste, and not accounting for the weight of any glue used, for the shallow 4-step stairs described above, if I simply made a solid set of steps, it would require:

Glue could easily add another 13 pounds, even if used sparingly.

Calculation:  Titebond is a commonly-used high-quality wood glue and would be suitable for this purpose.  Titebond says that, for wood applications, the maximum spread rate for their glue is 250 square feet per gallon.  At that rate, if you thoroughly glued this together, you’d end up using (720/250 =) almost three gallons of glue.  Titebond (same source) weighs 9 lbs/gallon, half of which is solids, so that would add maybe (3*9*0.5=) 13 pounds.

The total weight of the stairs could easily approach 100 pounds.   And, once you figure in the wastage, would easily require gathering more than 1000 square feet of cardboard, or the equivalent of 60 to 70 “medium” moving cartons.  There would also be a considerable amount of waste left over, after cutting out the required shapes.

In short, if used as a brute-force approach, it would simply be too much.  Too much material, too much weight, too much glue.

That said, one obvious alternative is to make the structure hollow.  Laminate up a series of broad “U”s.  Each broad “U”, upside-down, would be a step.  They would be laminated from strips cut from cardboard.  Would that work?

If I make each step 4.5″ thick (from tread surface to underside of tread surface), that would still use abut 450 square feet of cardboard, amounting to maybe 27 “medium” moving boxes, and weighing in at over 50 pounds.

So that’s better, and results in less waste.  But it’s still not what what I would call a sterling candidate.  The only way to reduce it further would be to make the step cross-section thinner than 4.5″.  That would certainly require experimenting to see how thin I could make it and still have it be sturdy enough to sit on.

Tentatively, I’m going to dismiss this one.  I see almost no modern commercial cardboard furniture made this way, and I think that’s probably sending a signal that this is not very practical. 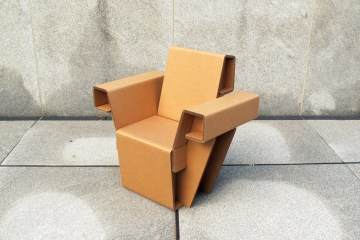 This approach typically gets billed as “origami-like”.  That’s because, at first glance, the strength of the furniture derives from the carefully folded cardboard.

At root, this is about creating horizontal load-bearing elements that act like structural beams.  That is, single pieces of cardboard folded so that you would have to stretch or rip the cardboard along the bottom edge of the beam, in order to make the beam deflect downwards.  These constructed horizontal beams are then married to inherently strong vertical members such a thick cardboard, or thick cardboard folded into geometrically stable shapes such as triangles.

That said, the one thing I notice about most of these is that they are NOT made of recycled cardboard and NOT made out of standard 1/8″ thick carton cardboard.  Instead, all or nearly all of these origami-like pieces seem purpose-built of virgin materials, and most seem to use corrugated that is substantially thicker and stronger than what you find in garden-variety cartons.

Upon reflection, I think that goes hand-in-hand with this approach.  My guess is that if you start piecing together materials and using a variety of thin, waste cardboard, you compromise the structural integrity.

I judge that this approach, by and large, isn’t going to be practical for a set of instructions focused on using whatever-is-available scrap cardboard.  This is great for commercial product or piece of artwork, but it looks inherently risky when translated to a set of D-I-Y instructions using scrap materials.

The hallmark of this method is criss-crossed strips of cardboard, oriented vertically.  This comes in two varieties that look similar, but work in completely different ways. 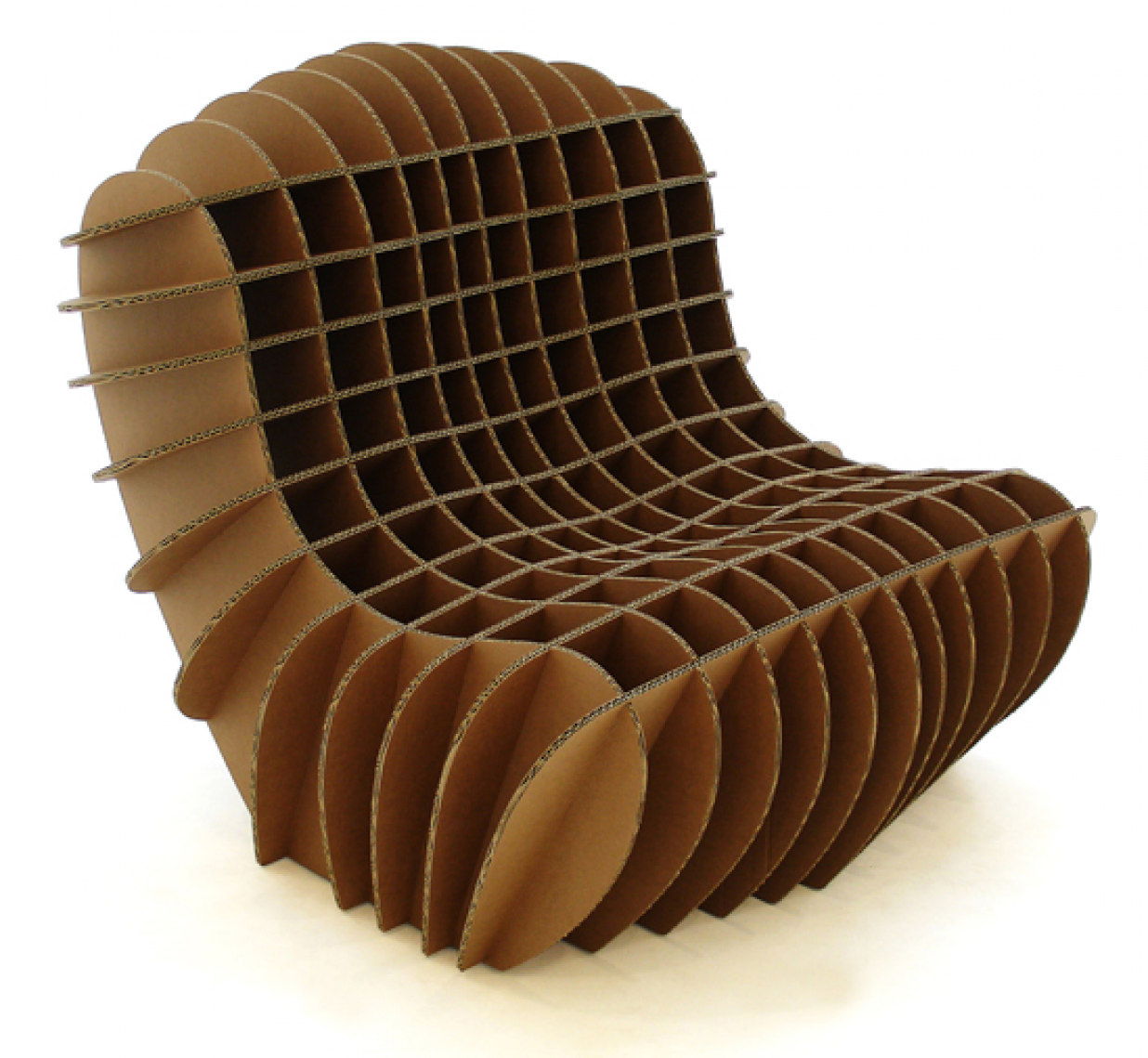 The first variety is more-or-less an air-filled version of the stacked sheet method.  This translates a load vertically, to the floor, via vertical sheets of cardboard.  You can tell these by the presence of closely-spaced cardboard strips held in a vertical orientation, as in the seat portion of the chair pictured above.  Mechanically, this is really not very different from the solid stacked sheets, it just uses less cardboard, and uses the criss-cross pattern to keep the sheets in the proper orientation.

If you were then to place a sheet of cardboard over the seat of this chair, you’d have “structural grid plus envelope”, per this website.  You still have a structural grid of vertical cardboard sheets transmitting load to the ground.  they are just hidden beneath a cardboard envelope. But the second variety of structural grid is a classic beam.  These elements take a downward stress, and carry that stress horizontally over to some load-bearing element.  In effect, these are horizontal elements built just like a hollow-core door:  Continuous skins on top and bottom, glued tightly to a central (mostly air-filled) core that holds those skins a fixed distance apart.

In the picture above, the horizontal bookshelves are just slabs of very thick corrugated cardboard.  The wide spacing between the top and bottom paper layers gives them enough strength to hold up the weight of the books.

So these elements work like an I-beam.  In order to flex this downward, you have to compress the top skin, stretch or break the bottom skin, or both.  The significant distance between top and bottom skins — maintained by the core — makes it quite difficult to do either.  And hence, you get reasonable load-bearing capability with relatively light weight.

But at this point, it seems pretty clear that the first type of structural-grid-plus-envelope — cross-crossed strips of vertically-oriented cardboard — is the most promising technique so far.  All I want to do is translate the force of someone sitting on these steps, down to the ground.  It looks like I could do that, with used cardboard, with a structural grid approach.  So that’s where I’m headed.