The Chick-fil-a-car-wash is in the process of getting some exterior modifications to reduce light trespass, that is, excessive and annoying spillover of light onto adjacent properties.  In this case, the spillover is from the interior lighting of that building onto the nearby townhouses.  Councilman Potter championed this change on behalf of the adjacent neighborhood.  Approval for those modifications was supposed to occur at the last meeting of the Board of Architectural Review (BAR), but was postponed.

So, good for them, for being willing to make the changes to reduce their light trespass.  But you have to ask a) why does a brand new building need this retrofit, and b) is this a one-off problem, or a generic problem that needs to be addressed for future buildings as well?

The answers, as far as I can tell are that a) the Town only checks for light spillover on paper, not in the field, and those paper estimates of light spillover have many shortcomings, and b) yeah, there are already indications that this is an underlying problem that should be addressed more broadly and more proactively.

What I’m saying is, don’t think of this as some sort of one-off mistake.  It’s a single example of a generic shortcoming of the zoning process.  It should be addressed as such.  In much the same way that I argued for changing the code to require closing in garages that face residential areas (to control noise pollution), the Town needs to step up its game and provide real checks on light trespass from new commercial development.

Light trespass can briefly be described as light that ” …  crosses property lines and detracts from property values and our quality of life.”

It can take the form of glare — a visible point-source of bright light that is a nuisance due to its visibility. This might occur from (say) an unshielded bright light bulb on some adjacent property, but in your field of view.  Or it can take the form of an overall high level of unwanted illumination, e.g., from an overly-bright street light shining directly onto your house. 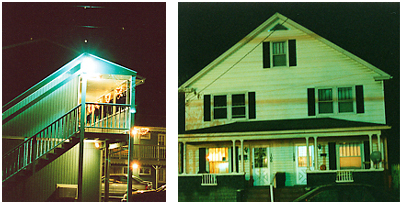 Oddly enough, in my cursory internet search on this topic, several of the illustrations feature acorn street lights, showing what happens when you install those acorn lights adjacent to housing.  I don’t think that’s a coincidence, because those olde-tyme lights are bright and totally non-directional.  That combination is more-or-less a recipe for light trespass.  To be clear, for those lamps, the same light that provides sidewalk illumination when installed in the commercial district is more-or-less guaranteed to generate light trespass when installed in a residential area.

The picture below shows exactly what’s going to happen when the Town installs those acorn street lights adjacent to the proposed Sunrise facility at 380 Maple West (Maple and Wade Hampton). In this case, while I have quantified that (Post #494), maybe a picture gets the point across better.  This not only illustrates the issue, but underscores that the Town regulations, as currently enforced, really don’t do much to address light trespass.  In particular, there is literally zero attention given to the spillover of the Town’s street lights (exterior light), to the building interior, in the MAC buildings themselves. 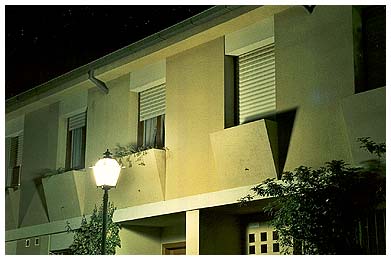 Here’s a second illustration of what happens when you put acorn-style non-directional lights adjacent to housing.  As I said, I don’t think it’s a coincidence that the first two websites that came up in a Google search of “light trespass” both showed acorn-style street lights as light trespass sources.

OK, that’s enough to get the point across.  Light trespass occurs when your neighbor’s lights shine annoyingly brightly onto your property.  To a degree, then, that’s a subjective term, so determining it in practice may be a little difficult.  But the concept is clear enough.

This section summarizes (some of?) Town of Vienna lighting standards for commercial buildings, and notes some shortcomings.

Current MAC and other regulations.

Exterior lighting is regulated under MAC.  You can read the regulations at this URL.  The regulations call for full-cutoff (“dark sky“) fixtures on the building exterior.  They also call for ground-level illumination, from exterior lights, to be less than 0.5 foot-candles at the lot line, if the commercial property abuts a residential area.  That’s roughly the illumination you’d get from a “60 watt” compact fluorescent bulb located 12 feet back from the lot line.*  That sets the maximum for allowable light trespass onto abutting residential property.

* The “foot candle” measurement is every bit as archaic as it sounds.  Roughly, it’s about the level of illumination you’d get from a birthday-cake candle, from one foot away.  The 0.5 foot-candle level if more than adequate to allow people to walk safely (typically, 0.2 foot-candles is the lower acceptable limit of parking-lot illumination.  If you lit a single “60′ watt” compact fluorescent (900 lumens) to light up a 24′ x 24′ room,  the light level at the mid-point of each wall would be 0.5 foot-candles.  (Area of a sphere 12′ in radius is 4*pi*r*r  =~ 1800 square feet, 900 lumes/1800 square feet = 0.5 foot-candles.)

Other aspects of Town code appear to limit light trespass in other situations.  For example, the Town code specifically mentions “glare” in the context of land zoned for commercial use.  It limits the height and brightness of off-street parking lighting in some zones.  It requires that lighting for residential swimming pools be shielded so that it does not spill over onto adjacent property.  It limits the lighting on exterior signs, and bars lighted signs that are too close to residential areas.  And in the MAC zone, exterior lights have to be “shielded”, but that only seems to limit them against broadcasting light upward, not against broadcasting light sideways.

Shortcoming #1:  Regulations don’t appear to limit spillover from interior lighting.  And that’s exactly the problem at the Chick-fil-a-car-wash noted above.  The bright lights on the interior ceiling of the car wash shine through the open sides of the building.  I don’t think any aspect of the Town’s review of the building plans would have looked for or caught that problem, despite a building that is, by design, mostly open to the exterior.

Further, my limited experience with lighting software suggests that most commonly-used software isn’t capable of projecting interior light levels out to exterior ground level.  To do so, it would have to hold a full three-dimensional model of the building — including window openings.  Whereas the (publicly available) software I once used did little more than add up the light levels from exterior fixtures, with no way to accommodate solid objects in the path of the light.

This matters, by the way, for the proposed building at 380 Maple West, slated to be a Sunrise.  Much of the upper floors of the back of the building consist of residences.  Nothing limits the overall light spillover from those rooms down onto the neighboring property.

To see that lighting plans don’t appear to capture interior light spillover, just look at the light levels projected for the entrance to the Chick-fil-A-car-wash.  Right now, that entrance is brightly lit by an array of bright-white bulbs on ceiling of the entranceway.  But the exterior light plan shows little illumination at the entrance — presumably because it does not capture the spillover.

Here’s the light plan, with Maple Avenue at the top, and the brightly lit entranceway at the left.  The little numbers are projected ground-level illumination in foot-candles.  Red circles indicate minimal projected ground-level light of (e.g.) 0.1 to 0.2 foot-candles directly in front of the brightly-lit entrance.  And note that the figure shows no interior light levels.  I’m pretty sure that means that the light plan completely ignores the array of bright lights located on the ceiling of the open entranceway.  (In short, it looks like the Town could not have known, in advance, just how bright the entranceway would be, because there’s no provision in Town code that covers “interior” light levels.) Similarly, and noted in an earlier posting, the projected light levels at 380 Maple West (proposed Sunrise assisted living) appear to ignore the Town-mandated street lights.  Note that the light level directly under the acorn lights is no different from the light further from those lights.  This also makes sense, because the builder is showing the light from the fixtures that are under the builder’s control, not the ones mandated by the Town.

The picture below is the proposed front of the Sunrise facility, with Maple Avenue at the bottom.  The A in red is the Town’s acorn-style street light.  The lack of change in illumination is circled in red.  I believe this also illustrates the lack of calculation of spillover of interior lighting, as neither the very bright garage lighting (G) or alcove lighting (C) appears to spill over onto the sidewalk in front of the building.  Either those lights are very tightly shielded, or no spillover from interior to exterior was calculated as part of the lighting plan.

Shortcoming #3:  Regulations do not appear to regulate glare from lighting.  Town code limits glare (direct view of bright light) in the industrial zones, but I could not see any similar limits in the commercial zones.  The only clear limitation is that exterior fixtures cannot shine light upwards.  This means that there is a potential for bright lights, mounted high on the building, to be visible from the adjacent residential areas.

Shortcoming #4:  Regulations don’t apply to the Town of Vienna’s own street lighting.  For example, while Fairfax County and Town rules require that private property owners use full-cutoff (dark-sky-compliant) exterior fixtures, those rules do not apply to the Town.  And so the Town is planning to use the olde-tyme “acorn” streetlights at (e.g.) 380 Maple West.  Those fixtures spill light in all directions, including straight up.

In particular, I don’t believe the Town has thought through all the implications of using those acorn fixtures directly adjacent to residential buildings and residential areas.  Already noted, the third picture in this posting gives a pretty good view of how the Town’s olde-tyme streetlights will light up the side of the proposed Sunrise building.  You can just look at that and say, well, oops.  Nobody’s checking for that, and so you can reasonably expect to see it at Sunrise and at any other MAC buildings built along those lines.

If the Town is bent on putting large mixed-use buildings adjacent to residential areas, it needs to start paying more proactive attention to spillovers such as noise, light, and traffic.  It shouldn’t be up to the neighbors to have to complain after-the-fact, and depend on the goodwill of the business owners to fix a problem.  These sorts of protections ought to be built into the code and enforced.  In particular, given this recent turn of events at the Chick-fil-A-car-wash, Town regulations should specify the acceptable level of light trespass from all sources (interior and exterior), and those need to be enforced.  Somebody needs to stand at the lot line and actually measure light levels before buildings are approved for occupancy.

Secondarily — and really just my personal prejudice — I wish the Town would rethink the use of its olde-tyme acorn lights in and around residences.  They work well on Church street but really add nothing to the ambience of Maple Avenue (Post #503).  They are the opposite of dark-sky compliant, and they spill glare in all directions, which makes them both inefficient and a nuisance.  And, when located a few feet from the side of a building, by shining directly into residential windows, they detract from the value of MAC private property.  It’s kind of nuts to have the Town needless destroy property value just because they can’t think outside of the box for street lights.