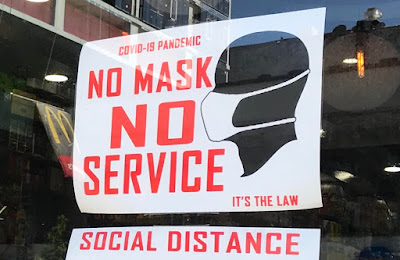 I can with near-certainty predict that when people look back on this pandemic, praise is going to be reserved for those who got tough, early.  Bear that in mind when you decide what to support.

So, we finally had a prominent local business institute a mandatory mask policy, CEO excepted.

I think people will figure out that they ought to be wearing masks, sooner or later.  Some a lot sooner.  Others a lot later.

Here in Vienna, Fresh Market had a mandatory mask policy at least a month ago.  So that’s where I shop now.  And it looks like Whole Foods finally did that about a week ago.

But Giant?  Ah, looks like they’ve gone as far as maybe even encouraging employees to wear masks. Wow.  Encourage.   That’s a fail.

As an economist, all I can say is, how stupid do we have to be?  Just ponder the economic cost of what we’re doing now in Northern Virginia.  Consider that, as of today, it’s not working well.  (Fairfax County racked up another 300 or so cases today.)  Consider that a mandatory mask policy is virtually costless.  Consider that the head of the Chinese CDC just flat-out told us that the lack of mask use is a huge mistake.  Consider that the CDC changed its guidance — almost unheard of, mid-epidemic.

Masks are not some form of sure protection.  But the odds are overwhelming that they help prevent spread of disease, to some degree.  They ought to be mandatory in any setting outside the home where individuals share indoor space.  Retail, workplace — it doesn’t matter.  Anywhere.

And instead, we sit here with the same policies in place, no changes, no ramp-up, nothing new to try.  We continue the beatings and hope morale improves.

It took having cases appear literally within the White House to get a mandatory mask policy for White House staff.   If not for the President and Vice President themselves.

But at least they’re ahead of Giant Food.