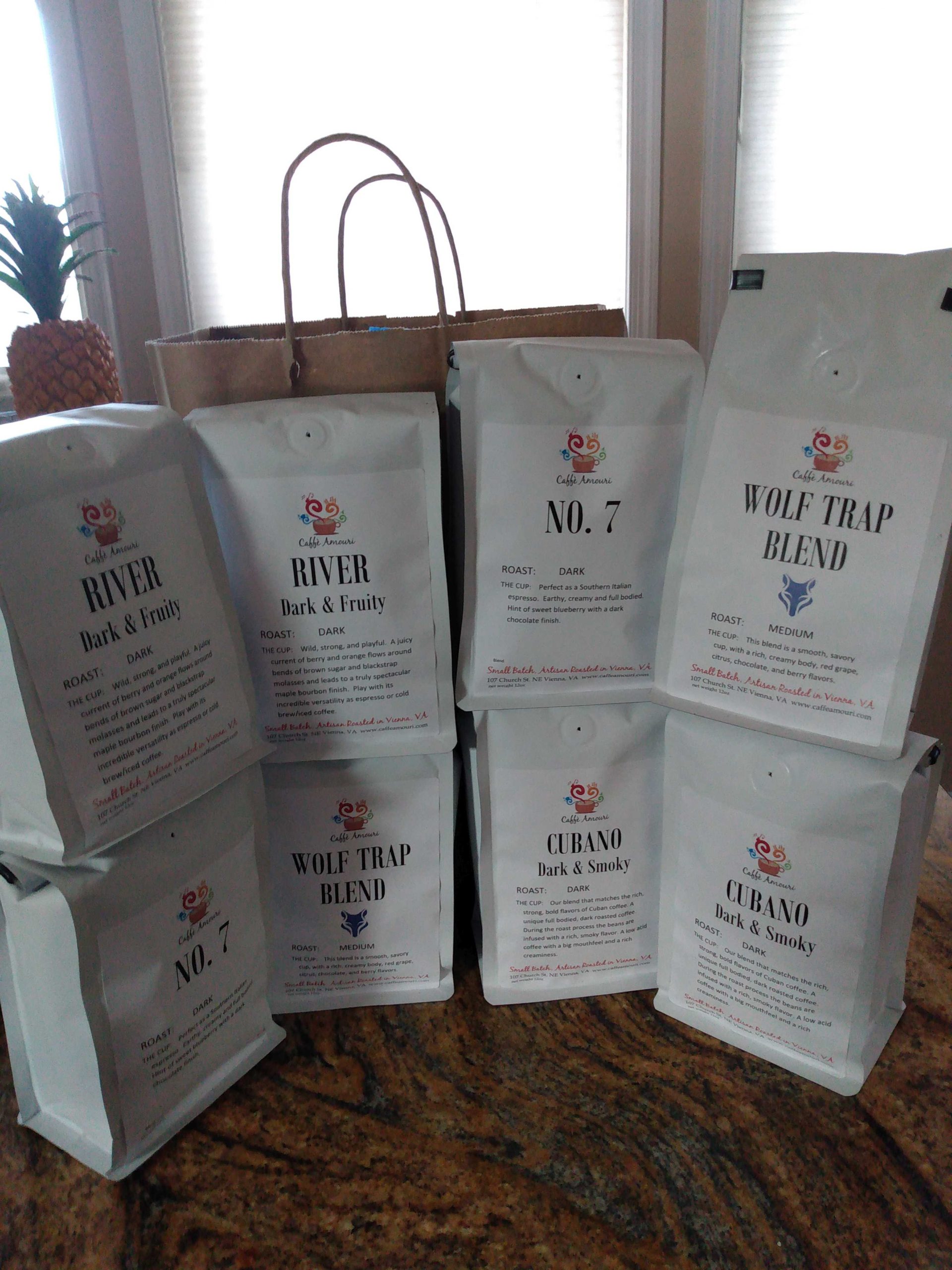 The first picture above is a bulk purchase I made early in the pandemic, from a  beer and wine shop here in Vienna, VA (Post #578, Stock Investing 101).  The second is a bulk purchase from a local coffee roaster and coffee shop, made yesterday.

The drugs differ, but the rationale is the same.  This post isn’t literally about the drugs, and it’s not going to propound some some false dichotomy between ethanol or caffeine as the favored recreational drug of the pandemic.  This post explains why we need to keep supporting local merchants as the U.S. recovers from the COVID pandemic.  Plausibly, they need your purchases now more then ever.

The shutdown point versus the break-even point.

We’ve had remarkably few business closures in the Town of Vienna during the pandemic (see Post #863 for a quick survey of Maple Avenue retail).  And sure, this is a wealthy area and reasonably recession-proof.  But the seeming robustness of our retail sector still looks impressive, given how steep the revenue reductions were in certain retail areas (See Post #946).

In fact, if I had to bet, I’d bet that retail turnover in the Vienna commercial district was slower during the pandemic than it would have been otherwise.  And, paradoxically, I think the pace of business turnover is going to pick up as the pandemic fades.

That’s all about the Econ-101 concepts of the break-even point and the shutdown point.  The break-even point for a business is where it, well, breaks even.  Where revenues are enough to cover average cost. The point where the business starts to make a net profit.  The point where revenues are enough to allow it to pay the rent, pay off its debts, pay the employees, pay for the cost of materials purchased, and still come out ahead.

By contrast, the shutdown point is where revenues are only enough to cover variable cost.  That’s the portion of cost that varies with the amount of output produced.  A business in that situation might have revenues sufficient to pay some reduced, skeleton staff, and to purchase enough new stock to keep something on the shelves.  But not enough to pay fixed costs such as rent or interest payments on outstanding loans.

The distance between the shutdown point and the break-even point is a kind of business gray area.  In the short run, a profit-maximizing business will try to stay open, even if it’s below the break-even point and is losing money, as long as it’s above the shutdown point.  As long as, say, it can pay part of the rent each month, even if they can’t pay all of it.  And for a small retail business in a high-rent area such as Maple Avenue, that gray area might be pretty large.

(Oddly, I know of just one restaurant in Vienna that chose to shut down temporarily rather than remain open.  This was a new ramen restaurant.  They didn’t do take-out or try to find some other way to remain open.  They simply closed their doors for the duration of the pandemic.  Even with that, based on the reporting, it was only their Vienna branch that they closed.)

During poor economic times, landlords are more likely to allow those businesses stay open, rather than force closure (bankruptcy) by demanding full payment.   That’s not because landlords as a class are kind souls.  It’s a dollars-and-cents consequence of having few good alternatives.  When the entire retail scene is disrupted, they can’t readily find a paying tenant to displace the one that can’t pay its rent.  Collecting some rental income each month is better than collecting none.

To put it simply, there’s little point in putting the squeeze on local merchants for unpaid rent when, realistically, there is no better alternative than to let it slide until times get better.  And so the business that is below break-even, but above shutdown, remains open.  And on the surface, business conditions appear unnaturally good.

What you see is a street full of businesses that remain open.  What you don’t see is the rate at which those business have been piling up debt during the pandemic.

But now, as COVID-19 fades, particularly with Federal money sloshing through the economy,  retail business opportunities ought to be good.  The phrase you’ll be hearing everywhere in a month or two is “pent-up demand”.  That’s the formal economics term for “spending like a drunken sailor.”

I’m not hearing any talk of a general forgiveness of pandemic-related commercial debt.  Instead, I’m betting that creditors’ forbearance about those unpaid debts is going to evaporate as the virus disappears and retail business conditions improve.

And that’s why your local merchants need more support as the pandemic ends.   As things return to normal, it’s going to be time to start settling up the arrears.   From my very limited experience with small retail businesses, I can guess that’s going to be a damned difficult thing for many of them.  And there will be new business, not burdened by pandemic-related debt, to displace them if they can’t do it.  And so, somewhat paradoxically, the impact of the pandemic on local retail is only going to be fully revealed once the pandemic is over.

At least with these business debts, the business owners and their various creditors know where they stand.  Everyone is fully apprised of the situation, and fully aware that the bills will eventually come due, if perhaps not be paid.

But there’s another aspect of funding the pandemic that remains squarely in the realm of fantasy.  Free money.  Money that everybody gets, but as of yet, nobody has to pay for. In his book “The Great Crash 1929”, economist JK Galbraith defined the bezzle as the “inventory of undiscovered embezzlement”.  At any one time, it’s the total amount of money in the US economy that has been stolen, but for which the theft has not yet come to light.

When the embezzlement is discovered, that temporary excess sense of well-being collapses. The embezzler’s status is unchanged, but the victim realizes they’ve been had.  Or the embezzler goes to jail, and the victim is made whole.  Either way, there’s some misery involved.

Right now, as regards the Federal deficit, we’re still in that lovely “bezzle” stage.  I don’t mean to imply that Federal debt is theft.  Far from it.  It’s just that free money seems to be pouring out of Washington.  Everybody’s getting their cut, and nobody’s paying for it.

Last fiscal year saw a one-year Federal deficit that was, as a proportion of GDP, the largest since WWII.  And this year, I believe we’re going to give that record a run for its money, so to speak.  If that doesn’t create some warm-and-fuzzy feelings throughout the economy, it’s hard to figure out what would.

But eventually there will have to be some reckoning-up, to some degree.  Some attempt to balance the books.  Some understanding that debt matters.  Regaining some sense of balance there is arguably the biggest economic-political challenge of the post-pandemic era.

As we return to normal, for me, as an economist, this will be one of the most interesting things to watch.  Sure, we can spend like a drunken sailor for a while.  But, as a nation, don’t we eventually have to sober up and pay back the bezzle?  It should be interesting to see that play out.