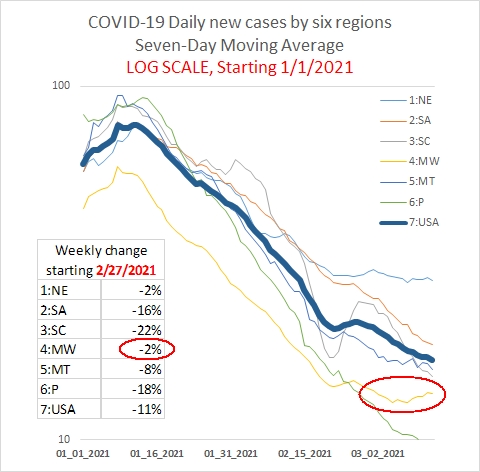 The only thing that I see as interesting is the continued uptick in new case rates in the Midwest.  That’s due to slow increase in a couple of fairly populous states.  Otherwise, nationally, new case rates continue to drift downward. If you’re looking for something that might plausibly have cause the new-case trend to change, you have to look back two or three weeks or so before the change in the reported data occurred.  That’s the total lag involved between the time somebody actually picks up an infection, and the time that infection works its way into the reported data.

Michigan has the clearest turnaround in trend, with a well-defined low point circa 2/21/2021, and a doubling of new cases per day since then.  So, let’s go fishing.  Did anything interesting happen in Michigan in, say, the first week of February?  Or is this just another totally random happening?

Well, yeah, in fact, I immediately found this, from the Detroit Free Press, dated January 22, 2021, regarding removal of COVID restrictions as of Feb 1, 2021.  And so, Michigan did remove some COVID-19 restrictions in early February.

But those changes seem pretty tame.  The foremost of which is that they re-opened indoor drinking and dining at 25% of capacity.  If that’s enough to turn things around, then we’d be seeing that all over the country, I think. Just Googling to see if anyone has an explanation for the turnaround in Michigan, I find that the growth in new cases in Michigan is among the school-age.  (And, from other sources, young adults age 20-29)  They’ve now vaccinated enough seniors that cases are falling among the elderly.  But that apparently is more than offset by an increase in cases among the young.

I found it impossible to get the detailed data on Michigan cases by age over time.  That said, the most recent discussion of the situation in Michigan, by state public health staff, note that new cases are in fact growing among the 10-19 age group, and that the number of school-related outbreaks has been increasing (March 9 discussion, found here, .pdf, which comes from this page on the Michigan state government website.)

To the extent that there is a particular school-related issue in Michigan, it’s concentrated in high schools.  This shows outbreaks for the most recent reported week, versus all outbreaks, in Michigan K-12 schools:

And while that’s interesting, and supports the idea of opening elementary schools first, it doesn’t bring me any closer to understanding why cases are rising in Michigan.  Apparently, it has something to do with young adults, and in particular, with their high school students.  Enough of an increase so that it offsets declining new infection rates among the elderly.

Minnesota also had a minor rollback of restrictions in early February, but as with Michigan, those seem minor and routine.  There were some modest increases in restaurant indoor seating, gym use, and so on.  Certainly nothing that appears radical, and nothing that appears different from a dozen other states.

Certainly, against a backdrop of all the changes that have been occurring in an ongoing fashion, those seem like just so much noise.

But, interestingly, again in Minnesota, if I dig into the available data, the high-school-aged population is now a growing proportion of all cases.  The data source is from the Minnesota COVID-19 dashboard, cases by age group and specimen date (weekly).  If I plot the 15-19 age group as a fraction of all new cases, it increased in early February. Source:  Calculated from data from the Minnesota COVID-19 dashboard, cited above.

Well, that’s all pretty thin.  And in any case, it’s the worst sort of post hoc propter hoc to look at two states where the trend changed without bothering to compare to states where the trend didn’t change.  But as far as I have been able to tell, there is a common thread of increased cases among the high-school-age population in both states.  For what that’s worth.

I’d say that the bottom line is that I can find no strong clues as to why the trend in new COVID-19 cases in these states is different from the trend in the rest of the U.S. Midwest.  There’s a hint that it involves high-school-aged kids in both states, but only a hint.  And no clue as to why that would be an issue in these two states and not others.