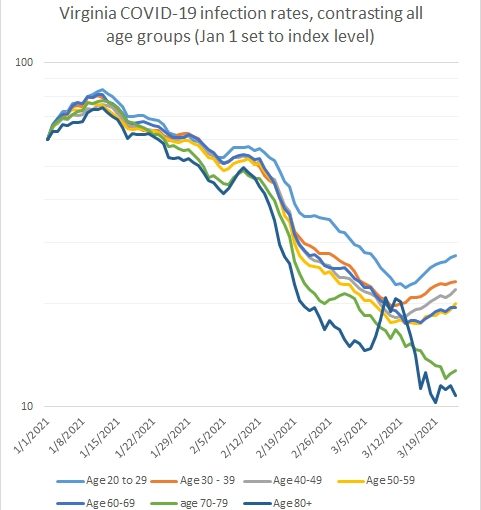 This post started to lay out yet another reason why any fourth wave of COVID-19 in the U.S. isn’t going to be as bad as the third wave.   But what I thought was going to be a slam-dunk data analysis turned into a puzzler.

Here’s the odd part:  The data don’t show that.  At least, not in Virginia.  Not yet.   And I have no firm idea why.  Or whether this phenomenon occurs nation-wide.

In this post, I only do the first part of that — I look at the changing age mix of new COVID-19 cases in Virginia.  The result was startling enough to be worth a stand-alone posting on it.  I’ll be looking a hospitalization and mortality rates in a subsequent posting.

The age mix of the new cases in Virginia has changed as expected.  The elderly constitute a far smaller share of new cases now than they did at the start of the year.  That was expected.  What wasn’t expected was how that’s occurring, as pictured above.

In Post #1060, I stated something that I thought was pretty obvious, but that wasn’t being said often enough:

But in addition, this is increasingly a young person’s pandemic.  New COVID-19 cases have shifted away from the elderly and middle-aged, toward young adults.  (And now, in Michigan, high-school-aged youth).

Shouldn’t that result in less severity of illness per new case?  Less morbidity and mortality.  In effect, a new case today really isn’t equivalent to a new case during the U.S. third wave.  The average new case today ought to have a lower impact in terms of health, and in terms of (e.g.) health care use and cost, and overall death rate.

Vaccination accelerates the shift of cases away from the elderly

This shift in the age mix of new COVID-19 cases started slowly, way back in 2020 (e.g., see Post #726 documenting the start of that in Virginia).  But now, with immunization focused on the elderly, we are seeing larger reductions in new cases in that population segment as a fraction of the total (Post #1044). Ignore the “speed bump” in the bottom blue line above (age 80+).  That’s clearly a data reporting artifact.  What you then see is pretty startling.  The elderly (70-79, 80+) parted ways with the rest of Virginia on or around March 15, 2021.  Five age groups began to see rising new case counts.  Two age groups continued to see falling new case counts. That’s the date when the new case counts for Virginia as a whole stopped falling, and more-or-less leveled out.  From which, I think I can conclude a couple of things about Virginia’s recent history:

First, if not for vaccination of the elderly, Virginia case counts would be rising steeply.

Second, this seems to be a race between vaccination, on the one hand, and otherwise-rising case counts, on the other.  And, as it just so happens, in Virginia, those two factors appear to cancel each other out, very nearly, for the time being. Just for completeness, let me show current fully-vaccinated rates by age group.  This really does not fully capture the extent to which protection has been concentrated in the elderly.  If I could go back in time and capture this as of a couple of weeks ago, the elderly/non-elderly contrast would be more stark.

You have to wonder how universal this phenomenon is, and to what extent this accounts for the lack of U.S. trend, despite rapid increases in the vaccinated population.

In any case, for Virginia, this validates the idea of the offsetting-effects calculation laid out in Post #1051.  What we’re seeing in Virginia is NOT a stable rate of new COVID-19 cases.  What we’re seeing is an increased rate of new cases in the (largely) un-vaccinated population, offset by a falling rate in the (largely) vaccinated population.  And, purely by chance, a stable average of the two.

Here’s where it stops making sense.  And so, I’m going to have to do this as a separate post.  But the bottom line is that the rate of hospitalization per new case has gone up, in Virginia.  Even as the age mix has shifted toward younger cases.

That’s such a large change, and so contrary to the change in age mix, that I want to check the numbers before writing that up.  The only point that I’m making, for this post, is that the apparent severity of the average new case isn’t falling in Virginia, despite the shift in age mix.