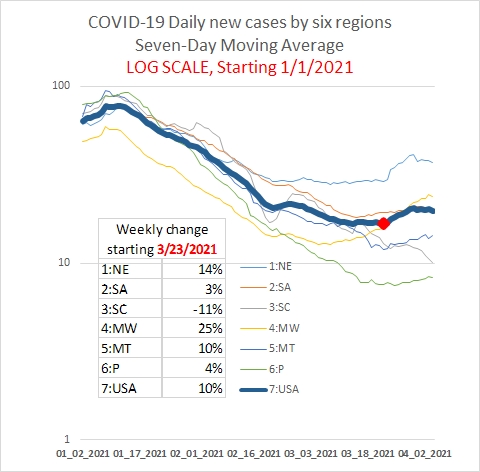 The U.S. fourth wave of COVID-19 is fundamentally different from the prior three waves.  If you go back to the end of March, I couldn’t even really say whether or not there was a “fourth wave” at that point (Post #1079).

The prior waves of COVID in the U.S. had some structure to them.  But not this one.

In the first wave, only a handful of states were strongly affected.  That was focused on urbanized areas with (presumably) a lot of foreign travel.  And then, areas adjacent to those.  That centered on New York and environs, and a handful of cosmopolitan cities across the U.S., such as Los Angeles or Washington DC.  Almost everybody else had (what we now know to be) low and stable rates of infection.  Call that the early importers wave.

This is, of course, a simplification.  A handful of states seem to come up over and over in these waves (e.g., Louisiana, Tennessee).  But I think this accurately captures the main centers of spread in the U.S.

The second wave was the mid-summer wave that affected a handful of high-indoor-air-conditioning states.  Mostly, everyone else just muddled along.  Again, a fairly clear structure.  It was a mid-summer hot climate wave.  I continue to believe that spending a lot of time in a low-humidity indoor environment (Post #894) was the main driver.  Let me call that the summer air-conditioning wave.

The third wave involved virtually every state seeing some sort of high mid-winter peak.  It started in Midwest, among the states with cold, dry winters, which again points to indoor humidity.  Then virtually every state participated.  And then we all came down off those peaks simultaneously.  The timing matches the seasonality of other coronaviruses.  That was the coronavirus seasonality wave.

The fourth wave is, in theory, a race between vaccination and the more-infectious COVID-19 variants.  (Though you would be hard-pressed to find any empirical evidence supporting those two factors as the determinants of state-level COVID-19 trends (Post #1092).  But what we actually have is Michigan (and maybe Minnesota), New York and New Jersey, and then everything else is a muddle.  No structure at all, that I can see, other than possibly a warm-climate versus cool-climate differential (again, (Post #1092).

As a result, the U.S. trend doesn’t really reflect any underlying country-wide reality.  It’s just what you get when you average a bunch of different trends, all pointing in different directions.

And yet, the virus persists.  So far, there is no evidence that even one state has hit that magical “herd immunity” level that should result in a full end to the pandemic.  And, if I had to characterize this fourth wave, such as it is, I’d have to call it the fizzling out wave.  Any trends you’d care to see, you can find some state with that trend. And the national trend — or lack thereof — is just whatever the average of the states turn out to be. What you can’t find is any state where there appears to be some clear, definitive end to the pandemic there.

Here are my top ten candidates for states where we ought to see herd immunity kick in, due to high presumed levels of immunity in the population.

And so far, I’m not seeing it.

And so, what we have at the moment is a handful of colder-climate states that aren’t doing so well, starting with Michigan.  And then, everybody else, just kind of muddling through.  And as a result, we have no strong fourth wave.  The U.S. trend, such as it is, is just kind of fizzling out.  No huge outbreak, but no clear end in sight either.

Below, I’ve changed the scale on my regional trends chart so that all the regions are now shown.  Outside of the Midwest, there are no real outbreaks.  Outside of the U.S. South-Central region, there’s no indication that this is going away, either.  I guess the best we can hope for is that, once enough people are vaccinated, this will just finally just fizzle out.  But that’s not happening yet.