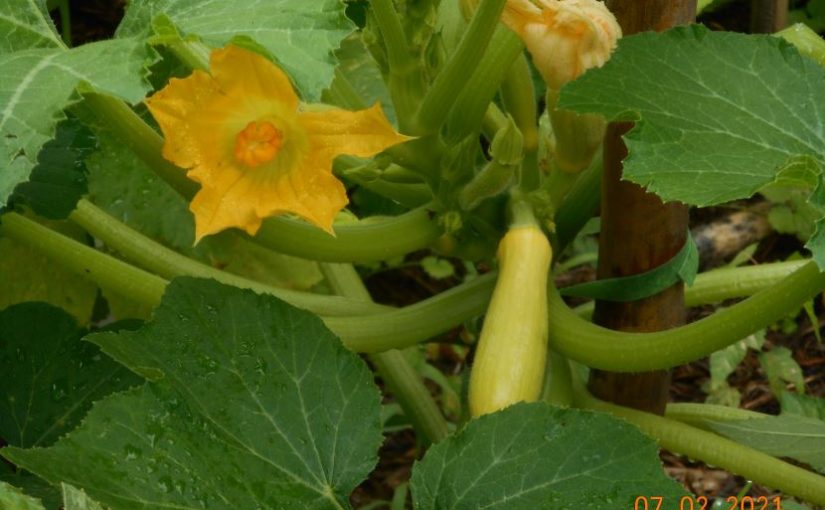 I have two fig trees, planted maybe a dozen years ago.  One is barren.  The other now bears a nice crop of figs.  The contrast looks like this: Last night’s storm tore down much of the barren tree, but left the fruitful tree untouched.  Which is what got me on this biblical path this morning. I wonder if I should take that as an omen of some sort, and just finish the job.  A la Matthew 7:19.  Hew it down and cast it in the fire.  Or, maybe, as with my pear tree (Post #G21-024), I just have to be patient and wait for this particular fig to bear fruit.  So, for now at least, it looks like I’ll dig around it and put on manure, and wait one more year.

My summer squash have survived a succession of plagues this year, including but not limited to:

Those plants pulled through with a combination of:

And probably just some luck as well.

As a result, my plants look nice and green, they appear almost disease free, they are all nicely trellised up, and so on.  This is the best my summer squash have ever looked on July 1.  If gardening were based on looks, this would be my best squash year ever.

The only problem is that they aren’t actually producing any squash.  Not for lack of female flowers, but because, the final plague seems to have been one of killing all the firstborn sons.  My plants have no male blossoms.  None.  And haven’t had, for about the past two weeks.  As a result, all those female blossoms go unpollinated, and I get no fruit.

In any normal year, I’d be thrilled to have a summer squash look like the first picture below.  If you look closely, you can see close to a dozen female blossoms in various stages of development.  Normally, that would mean a bumper crop on the way.  But lacking male blossoms, maybe one or two might be pollinated, by chance, by bees coming in from other gardens. It’s not unusual to have an imbalance between male and female squash flowers.  So, as a matter of simple statistics, if you only have a plant or two, you’re going to see some periods with males-only, or with females-only.

But I have more than a dozen plants, four different varieties, all blossoming to a greater or lesser extent.  And all producing nothing but female blossoms.  Nary a male in sight.  That can’t possibly be attributed to chance.

I’ve never had this happen before, and I find scant mention of it on the internet. (All males is a frequent issue, because most plants start blossoming with males only.)

I suspect it has something to do with the odd bacterial/fungal disease that attacked my plants earlier (Post #G21-036, June 22, 2020).  That killed off all the small fruit at the time, and maybe it killed off all the male blossoms forming at that time.  My plants appear to have recovered from that disease, but I haven’t seen a male flower since.

After some research, my conclusion is that all I can do is wait.  Or tear them up and replant.  So I’m waiting, hoping to see some males arriving soon, and counting on the bees otherwise.

There are no tomatoes in the Bible

My interest in gardening goes back to the era in which the only way to get an edible tomato was to grow it.  Or to know someone who grew them.  Back in the day, your only other option was to buy the hard, tasteless things then sold as tomatoes in the grocery stores.

That long-gone era is the wellspring of my obsession with home-grown tomatoes, even though the world has changed.  In the modern era, with farmers’ markets, and with much-improved grocery-store tomatoes (e.g., Campari tomatoes, heirloom variety tomatoes), there’s far less of a case for growing your own. You can get a reasonably good-tasting tomato year round.  Not only do you not have to grow them, a tasty tomato is no longer the summertime treat that it once was.

But all of that modern reality just doesn’t matter to me.  When I plan my garden, the first thing on the list is the tomatoes.  And I spend a lot of time anticipating that first ripe full-sized tomato of the year.

Every morning as I do my garden chores, I spend some time staring at my tomatoes.  My numerous rock-hard green tomatoes.  Not so much willing them to ripen and trying to catch the first signs of it.  All the time, reminding myself that even if they don’t ripen, they still make a pretty good lactofermented pickle (Post #G31).

I spend so much time deluding myself that a ripe tomato is nigh, that when the ripening starts, I have to look twice to believe it.  And so, in an era where people will routinely Instagram what they ate for dinner, I guess I can un-self-consciously post a picture of my first ripening tomato of the season. As I noted in Post #G21-038, in theory, I could pick that now, take it inside, and it would ripen up just fine.  Some claim that there would be no difference in taste between a tomato picked at this “breakers” stage and ripened indoors, compared to one picked when fully red and ripe on the vine.  And at some point this year, I’m going to do a single-blind test of that theory.  But for now, it stays on the vine.  It’ll give me something to look forward to every morning.