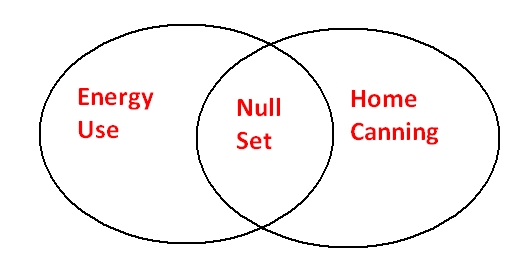 In this post, I estimate the carbon footprint of my home-made spaghetti sauce.

You’ll hear people casually assert that home-canned food is good for the environment.  The idea is that it avoids (among other things) the fossil-fuel use associated with transporting food.

Each quart of sauce I make generates a bit over two pounds of C02 emissions.  But that is heavily dependent on a couple of things.

First, I used regular “eating” tomatoes.  Based on USDA canning guidelines, my guess is that substituting “paste” tomatoes (e.g., Roma tomatoes) would cut the energy cost in half, owing to the need to boil off less water when starting from “paste” tomatoes.

Plausibly, if you used paste tomatoes and cooked in an un-air-conditioned environment, your carbon footprint might be somewhere around one-quarter the amount I calculated for my sauce.

I’ve been having a good year for tomatoes.  So much so that, for the first time in my life, I’ve made several batches of spaghetti sauce starting with home-grown tomatoes.

That turns out to be a surprisingly tedious task.

My first batch was the most labor-intensive.  The first set of directions I followed called for me to remove tomato skins and seeds before boiling down the remaining tomato pulp into sauce.  Removing the seeds minimizes the amount of water in the sauce, and hence the time required to boil it down.

This requires briefly boiling the tomatoes to allow the skins to be removed, peeling off the skins, then extracting the seeds by cutting open each tomato and squeezing out the seed matrix.  Given that most of my harvest is smaller-sized tomatoes, this was tedious in the extreme.

For the second batch, I just cut the tomatoes in half, threw them in the pot, then ran that through a food mill (a Foley mill) after about an hour of boiling.  This was vastly simpler, although the boiling time is tedious, particularly after the sauce thickens and it’s possible for it to catch on the bottom of the saucepan.  You end up spending a lot of time checking the sauce and stirring it.  The thicker it gets, the lower the heat must go, and the slower the process becomes.

For the third batch, I substituted a pressure cooker for the pot.  Ten minutes under pressure is adequate to break down the tomatoes so that they can be run through the Foley mill.  But the remaining open (un-pressurized) boiling time remains tedious, though, as you have to be careful not to let the sauce catch on the bottom of the saucepan once it thickens.

By my fourth batch, I had a system in place.  Pressure cooker – Foley mill – open boiling – crock pot.  The pressure cooker breaks down the raw tomatoes in short order.  After being run through the Foley mill, the remaining liquid can boil unattended for an hour or so to get some volume reduction.  Then whatever is left goes into the crock pot (slow cooker), lid ajar, for however long it takes to reduce the fluid down to spaghetti sauce.  Within reason, it appears impossible to burn spaghetti sauce in a crock pot.

At this point, the labor input is reasonable.  It takes a few minutes to halve or quarter each tomato, a few minutes to run the resulting pressure-cooked mass through the Foley mill.  And after that, it’s just a question of pouring it from pressure cooker, to crock pot, to freezer containers.

(Finally, the title is intended to be sarcasm.  Seems like every little thing is somebody’s journey these days.  Magellan’s circumnavigation.  Amundsen’s expedition to the South Pole.  Armstrong’s moon landing.  Those were journeys.  Four batches of spaghetti sauce ain’t a journey.)

After working out the kinks, it still seems like the energy input is pretty large.  It would be difficult to say exactly how much energy I’m using, but it seems like I ought to be able to get a handle on roughly how much energy it takes to make a quart of spaghetti sauce.

After measuring the pressure cooker and the crock pot, I appear to have reduced the volume of the original tomatoes by about two-thirds.  This runs contrary to the USDA guidelines, which state that a thick sauce requires reducing volume by one-half.  I’m guessing this is due to using standard “eating” tomatoes, instead of “paste” tomatoes that are more suited for sauce making.  I likely started with waterier-than-average tomatoes.

One way or another, almost all that volume reduction is simply boiling off the water (although some small portion of that is the skins and seeds removed at the Foley mill step).

Answering that has three parts:

This ignores a few other associated energy costs, but ought to get me a workable answer.  And it pretends that I did the whole thing on the gas stove, and ignores any efficiency differences between crock pot and gas stove.

For this, I’m simply going to modify the spreadsheet I worked up for estimating the energy efficiency of home-canned pickles.  You can go back to that posting if you want more details.  The only significant change here is that I’m going to translate the answer into pounds of C02. The answer is that producing a quart of tomato sauce from “eating” tomatoes generates a bit over two pounds of C02.  Not a deal-breaker, but not insignificant either.

To put that in perspective, my wife’s fancy new car could travel about 16 miles, on electricity, here in Virginia, for that same amount of C02 output.

Not shown, you could run a typical (3.5KW) electric clothes dryer for just about an hour, here in Virginia, and generate that amount of C02.

The other potential source of savings is the air conditioning.  But here, in Virginia, in August, there’s no way I’m going to do this on a propane ring on the back porch.  I understand that it could be done.  But not by me.