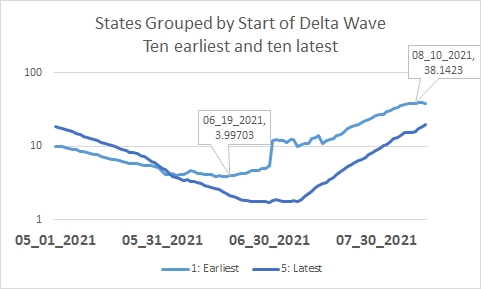 Average (median) start date for the Delta wave is 7/5/2021.  Map courtesy of datawrapper.de. Data source for this and other graphs of new case counts:  Calculated from The New York Times. (2021). Coronavirus (Covid-19) Data in the United States. Retrieved 8/14/2021, from https://github.com/nytimes/covid-19-data.”  The NY Times U.S. tracking page may be found at https://www.nytimes.com/interactive/2020/us/coronavirus-us-cases.html.

At this point, the rate of growth in new cases is falling no matter how you express it, in percentage terms (blue line) or as counts of cases (orange line). Three states -- Louisiana, Mississippi, and Florida -- now exceed 100 cases / 100K / day.  Florida is now third in the U.S.  Of those top states, Mississippi stands out for having a nearly-vertical curve of late, emphasized in red below.  The rest of them, by contrast, seem to be starting to peak.  Even in "natural units" (instead of logs), those lines near the top seem to be curving a bit. Checking out the roughly-two-months rule.

If anybody tells you they know why new case growth is slowing, they're kidding you.  Or perhaps, kidding themselves.  As far as I can tell, the best explanation for the slowing of the increase in new cases is that Delta wave is just running its course.  And, at present, my best guess is that it takes about nine weeks from the start of the wave to the peak, based on one observation:  Missouri.

I'd like to test that a bit further by sorting states by the start date of the Delta wave in each state.  That turns out to be remarkably hard to do, because a) there's no obvious criterion for what constitutes the start, and b) there's a fair bit of ambiguity, as these waves start slowly and then build momentum.  For some states, the start appears clear by eye.  For other states, there is no obvious start date.

I ended up defining the start dates by eye, relying mostly on finding a sharp change in the slope of the line when new cases / 100K / day was graphed on a log scale.

The simplest thing to do is to group the states with similar start dates for this U.S. Delta wave, then plot them on a log scale (to minimize differences in absolute level of cases, and emphasize growth rates in daily new cases per 100K population.

Earliest start date.  The average state date of these states is three weeks prior to the median of all U.S. states.  Note the pronounced curvature of the lines at the right-hand side of the graph.  It definitely looks like we're seeing a hilltop begin forming.  I count six lines where the very end segment is horizontal-to-downward-sloping. Median start date.  These states all started just about exactly at the U.S. median.  These are then an average of three weeks behind the states shown above.  Note the later and somewhat-less-pronounced curvature of the lines, at the right-hand side of the graph.  I only see one line for which I'd say the end segment is horizontal to downward sloping. Latest start date.  These states average about a week later than the ones above.  I'd characterize the group of lines as more-or-less straight, all the way out to the right-hand edge.  No clear slowdown in growth is evident yet.  I see no lines where I'd call the end segment horizontal to downward sloping. Finally, as long as I've gone to the trouble to eyeball all the start dates, let me divide the states into quintiles by start date, summarize, and graph those averages.  Below, I'm simplifying this a lot by showing just the earliest ten and latest ten states. Based on the average of the ten earliest states, it looks more like a seven-and-a-half week rule.  So perhaps Missouri was a bad example.  A reader pointed out to me that it took a while for the Delta wave to spread across Missouri, so that might have been taken longer than average to reach a state-wide peak.

Surely that's false accuracy.  Call it a roughly-two-months rule.  Two months from start to peak of Delta wave, on average.  If we date the start of this wave as just prior to the 4th of July, that puts the U.S. peak sometime in early September, plus or minus some broadening of the peak due to the averaging of the individual state peaks.

We still have to get down the back side of the wave, as new case rates slowly decline.  And there's still a winter wave to look forward to.  But at least we can get some sense that the current wave should crest soon for the U.S. as a whole.

I really can't say whether or not this analysis is helpful to anyone.  But my takeaway tends toward light-at-the-end-of-the-tunnel, for this wave, at least.  A couple of weeks ago, it looked as if Missouri was hitting its peak rate of daily new cases.  Now it looks as if almost all the states that started this wave early are doing the same.  That uniformity suggests there is some substance to the notion of a defined typical length of this wave.  As with prior waves, the states that led into the wave will lead out of it.  And eventually we'll all be on the other side of this one.