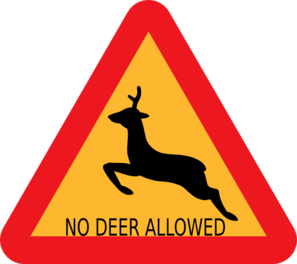 I have an un-fenced vegetable garden in Vienna, VA.  Which means that I have a problem with deer.

We all know that deer can read.  Otherwise, how would then know where to cross the highway?  But for some reason, they scoff at my no-deer-allowed signs.

This post is a summary of everything I think I know about deterring deer from eating my garden.  And an introduction to my latest deer-deterrent device, wireless deer fence.

The first problem with evaluating deer deterrents it that deer damage is sporadic.  The deer will come by, mow down a row of (say) beans, and move on.  They might be back tomorrow, they might be back next month.  You might have one herd of deer frequenting your garden.  You might have several distinct herds.  I’ve had long stretches where I’ve seen no evidence of deer.  I have had stretches where I’ve seen them daily.

As a result, absent a serious large-scale controlled trial, all tests of deer deterrents are one-way tests.  If you see continued deer damage, you know they are not working.  But if you see no damage, well, you just don’t know whether the deer deterrent worked, or whether you just got lucky for a spell.  There is a real element of people mistaking luck for effectiveness.

The second problem with evaluating deer deterrents is that deer differ, conditions differ, and the attractiveness of your plantings (compared to other nearby forage) will differ.  People swear that deer love hostas.  We have hostas all over our yard, and the deer have never touched them.  Others will swear that deer won’t eat tomato plants.  Yet that doesn’t stop my deer from chowing down on mine from time to time, at least when the plants are young.

This generates a true “path of least resistance” effect.  Deer manage their risk/return tradeoff depending on what’s available.  Deterrents that might work on some plants, in some circumstances, will not work in others.  If you’re growing something that deer find merely edible, but there is better forage nearby, maybe a simple folklore-style deterrent (Irish Spring soap) will convince them to go elsewhere.  But if you’re growing something that deer really like (e.g., sunflowers), and there’s little for them to browse elsewhere, you’re going to have to seek a stronger solution if you’re going to keep the deer off those plants.

As a result, the available information is a mix of:

The facts, as I believe them to be.

I’m not giving citation as to source here.  This is just a summary of my impression of what’s true about deterring deer, based on extensive reading of internet sources.

If I had it to do all over again.

I use several different deer deterrents.  Mostly, I only started gardening seriously last year, and I wasn’t sure what would work or not.  So, I tried a range of them, to hedge my bets.

If I had to start from scratch, knowing what I now know, I believe I’d invest a few hundred dollars in several Yard Enforcer motion-activated sprinklers, and the associated hoses.  I’d set up double coverage of every bit of garden beds that I have.  And I’d leave them on the “night” setting, so that I’d never forget to turn them back on after I’ve been working in the garden.

This would be a somewhat expensive solution.  The hoses would eventually sun-rot from being left out continuously, and would need to be replaced.  You’d probably cut one with the mower now and then.  And I’d guess that I would not expect to get more than five years’ reliable service from the motion-activated sprinkler.

That said, absent leaks, or freezing weather, I think this would solve my problem with minimal effort on my part.  As far as I can tell, the deer have never gotten used to the Yard Enforcer that I have.  I’m not sure if that’s luck, or whether it really does annoy them enough to keep them away in the long run.  But so far, when I remember to turn it on, for the area that it covers, it seems to keep the deer at bay.  This clearly would not work if you need to protect plants when temperatures drop below freezing.

What I have actually used, so far.

Bobbex deer repellent.  This has an excellent reputation, and really does seem to work in my situation.  I couldn’t really say if it’s any better or worse than any other name-brand odor-based repellent.

It has some drawbacks.  It stinks, so it’s kind of nasty to mix up and apply (you use a spray bottle).  You have to re-apply it at two-week or one-week intervals.  You can’t spray it directly on fruits or vegetables (it taints the taste of them).  And you have to amp it up as fall approaches, according to the directions, because the deer get more aggressive.

Of all that, the biggest drawback for me is that you have to remember to mix it up and use it every week, during peak deer season.  I’m just not that regular in my gardening habits.  (And, clearly, it’s not going to work if you take an extended vacation).

Yard Enforcer motion-activated sprinkler.  The deer don’t seem to get used to this one.  As long as I remember to turn it on, it seems to provide complete protection to the area it covers.

The hose connection on mine leaked, but a ten-cent rubber hose washer fixed the problem.  You do have to change the batteries every once in a while.  And I get a lot of false triggers in bright sunlight.

I have taken to leaving it set on “night”.  On that setting, it’s only active in the dark.  That way, I don’t have to turn it on and off as I go into and out of the garden.  (Or, more likely, turn it off and forget that I’ve done that).  And that avoids the false triggers in bright sunlight.

Home-made motion-activated radio (Post #G07).  I left this one in the shed this year.  It works, but it requires having an extension cord running across the lawn.  Not only will that eventually sun-rot, but there’s no convenient way to turn it off.  As a consequence, I was always triggering this as I went out into the garden.  (Don’t know if it scares the deer, but it never failed to scare the pee out of me.)  I think this would work well in an area that you didn’t routinely walk through.  But in an area where you do some sort of activity almost daily, this was less than ideal.

Blood meal, Irish spring soap, and other similar folklore-based repellents.  These had no appreciable effect that I could see.  Doesn’t mean that they don’t work in some circumstances.  Just didn’t seem to keep the deer away in mine.

As fall sets in, the deer get larger, hungrier, and more aggressive.  It gets increasingly hard to keep them out of the garden.  And, frankly, I get tired of spraying stinking solutions every week, trying to keep them out.  And I’ll forget to turn on the Yard Enforcer after I’ve been working in the garden.

I looked over what was commercially available, and settled on “wireless deer fence“, three units for $60.  That’s probably not quite enough for the size of my garden, but these will work in conjunction with everything else.

The wireless deer fence consists of roughly one-foot-tall plastic stakes that hold a deer-attracting scent-based lure.  They hold that lure in the middle of four high-voltage metal tines, running off a couple of AA batteries in the base.  If the deer touches nose or tongue to the tines, it gets a nasty shock.  And, ideally, this trains the deer to go elsewhere.  Place one wherever you note deer damage.

Of course I tried it on myself.  (If this turned out to be really horrific, I wasn’t going to use it.)  I did not have the moxie to lick it, deer-style.  Instead, I tapped it on my wet skin.  It hurts, but not too badly.  Felt about the same as brushing up against an electric fence.  Unpleasant and startling, but not hugely painful.  And no lingering pain once you lose contact with the high-voltage metal.  Once you break contact, you’re fine.

Based on the company’s write-up, one shock is enough to train any one deer to stay away.  In the grand scheme of things — no damage, no lasting pain, one shock, and trying it out on myself first — this did not seem like an excessively cruel deer deterrent to me.  Others could reasonably disagree.

And so, you place these where you see deer damage.  Maybe move them from time to time, just so the deer don’t know how to avoid them.

So far, they seem to work.  But, as noted above, there’s really no way for the backyard user to separate cause-and-effect from sheer luck, when it comes to deer deterrents.

Now you know everything about this topic that I think I know.  A tall fence was not practical for my garden.  I’m fairly sure that an electric fence would be illegal in my area.  I don’t own a dog.  So I’m left with a mix of second-best solutions.

This year, I planted my most deer-attractive plants right next to the Yard Enforcer.  I put things that deer don’t like — potatoes, for example — on the edges of the garden.  That, by itself, worked fairly well.

I’ve kept up with the Bobbex from time to time.  And I’ve now installed three wireless deer fence devices.

I still get some deer damage.  Mostly when I forget.  Forget to spray, forget to turn the Yard Enforcer back on.  But I’ve managed to keep it to a tolerable level.  As long as the deer are here and hungry, that’s about the best I can hope for.