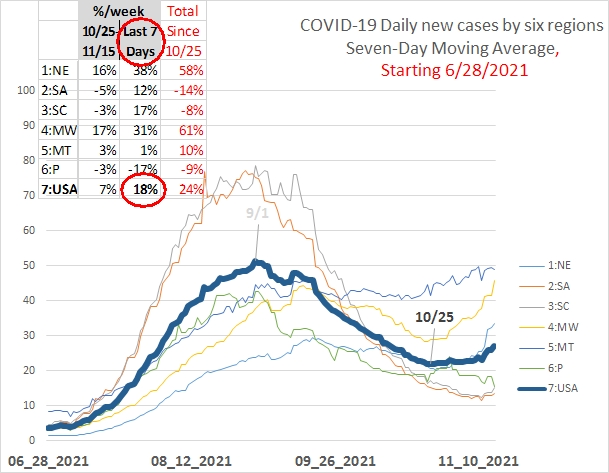 This year’s U.S. winter COVID-19 wave is not quite looking like an exact repeat of last year, but it’s looking fairly close.  It’s running a couple of weeks late, probably owing to warmer weather this year.  It’s starting from a higher base rate of infections, owing to the tail-end of the U.S. summer (Delta) wave.

But it’s now starting to parallel last year’s wave.  Like so: Data source for this and other graphs of new case counts:  Calculated from The New York Times. (2021). Coronavirus (Covid-19) Data in the United States. Retrieved 11/16/2021, from https://github.com/nytimes/covid-19-data.”  The NY Times U.S. tracking page may be found at https://www.nytimes.com/interactive/2020/us/coronavirus-us-cases.html.

It’s not a straight-up rerun.  Last year the winter wave was led by the Midwest and Mountain states.  The Midwest seems right on track, but the Mountain states are not.  That’s probably worth look at, at some point. If true, that would give the overall U.S. average curve a steeper profile than last year.

FWIW, my house finally dipped well below 50% relative humidity this morning (northern Virginia, USDA hardiness zone 7).  I’d guess my house is average size and construction for this area.  It’s a fair bet that most of the indoor spaces in this area are making that transition right about now, with increased rates of disease transmission soon to follow.  We’re not quite at the 40% relative humidity level where risk of transmitting respiratory diseases increases sharply.  But it should only take a few more days of cold weather to get this part of the country to that state.  I’m prepared (Post #895, humidifiers).

Have we learned anything important?

I think the answer is pretty clearly no.

Let’s start with the most obvious one first.

Last year, the entire first-world northern hemisphere had a severe winter wave of COVID.  Except for the Asian countries (Japan, Korea, China).  The worst of the three was South Korea, which topped out at about 1000 cases per day.  Or, on a per-capita basis, Korea’s winter wave peak was about 2.5% as high as the U.S. winter wave peak.

This year, the entire first-world northern hemisphere is in the process of having a severe winter wave of COVID.  Except for the Asian countries.  Again.  Japan and China have virtually no cases.  South Korea is again the outlier there, with about 2000 new cases per day, or, on a per-capita basis about 14% of the current U.S. average.

I wonder what might possibly explain that. What behavior could those first-world Asian countries have in common what we somehow lack in America and Europe? /s

Here’s a Forbes article documenting better than 90% mask use rate in public spaces in Japan.  That’s based on both survey data and from on-the-ground observation.  The comparable survey-based data from the U.S. would put us in the mid-30-percents (for “always wear a mask”).

It’s not as if this is a secret.  It’s just that, as a country, we are amazingly stupid and stubborn about this particular point.  When the U.S. CDC initially declared that Americans didn’t need to wear masks, it took a rebuke from no less than the head of the Chinese CDC to make them see the light (Post #590).  I think that’s well worth repeating, even if the head of the Chinese CDC said it more than a year and a half ago.  Note “The big mistake”.

Source:  Science, the magazine of the American Academy for the Advancement of Science. March 2020.

The second point that I think will never seep into the American consciousness is that today’s case counts reflect the infections that were occurring a couple of weeks ago.   That’s due to the time it takes for symptoms to develop, for symptomatic individuals to decide to seek care, to get tested, to have the labs turn those tests around, and to have pubic health agencies tally and report those test results.

Which means, obviously enough, that you have to be proactive.  You need to put your mask back on and change your behavior when cases start to rise, not once the hospital beds are full.

At this point, it’s beyond optimistic to think that Americans are going to be proactive.  So we are once again going to see preventive steps taken by the average American only after the hospitals are overflowing, and that gets reported in the popular press.  That seemed to be the point at which things started to sink in last time around.  I’m guessing it’ll be the same this time.

Obviously, the right thing to do, given how this is shaping up, would be to increase COVID-19 hygiene now.  Ahead of time.  Put your mask back on now, before case counts go up.

It’s too late for vaccination, I think.  Right now, 59% of the U.S. population is fully vaccinated.  That compares to 70% to 76% for the Asian countries above, 75% of Canada, and so on.  We aren’t quite down with the third world, but the list of countries with higher COVID-19 vaccination rates than the U.S. is kind of embarrassing.  Brazil, Argentina.  Mongolia?  Mongolia has a higher COVID vaccination rate than the U.S.?  Yep.

But at this point, it looks like, with a few exceptions (e.g., California), our collective state strategy is going to be to ignore this until the hospitals are full.  And maybe even after that point.

The only bright spot I’m seeing is that if we have one big blow-out of a winter wave in the U.S., then that ought to be the end of it.  At that point, between vaccination and infection, enough people ought to have enough immunity that this can recede into the background.  Looks like it’s going to be around forever.  But there won’t be enough potential carriers left to carry it on at pandemic levels in the U.S.  At least, that how it appears when I do my calculations.  YMMV.