If you look for graphic images of clotheslines, you inevitably get a page of crap like the image to the left.  Clothes lines are stereotyped as old-fashioned, or hicksville, or as the case of the one at the left, both.  With a side-order of sexism.

And yet, indoor dryers are such energy hogs that outdoor clothes lines have received legally protected status in nineteen states.  These are the so-called “right to dry” states.  In those states, a homeowners’ association cannot ban the use of clotheslines.  And this pro-outdoor-drying advocacy group gives links to the enabling legislation in all of them.  (Of course there’s an advocacy group for that.)

But don’t call it a clothesline, if you live in Virginia.  Here, legally speaking, I hang my underwear on a solar collection device, per statute.    Same category as photo-voltaic solar panels, solar water heaters, and such.

So, ignore the stereotypes.  Clothes lines are up there with cutting-edge solar, from an energy-savings and legal standpoint.

I actually have a point to this.  Sometimes I hang my clothes indoors.  And sometimes I get lazy and just chuck them in the dryer.  Which, in winter, I vent to the indoor space.  And so get both the heat and humidity that the drying provides.

And, because I’ve been touting the benefits of indoor humidity, I needed to know:  How much humidity does a load of laundry generate?  Which boils down to:  How much water is left in the laundry at the end of the spin cycle.  Pun intended.

Oddly, I could not find a simple reference for that, for the home laundry.  So I did my own measurement, weighing a pair of jeans pre- and post-wash.  This is in a high-quality (Speed Queen) old-fashioned top-loading washer.

I found that the jeans retained water equal to about two-thirds their dry weight. Which is surprisingly close to a middle-of-the-road spin cycle for commercial laundry equipment, as show below: 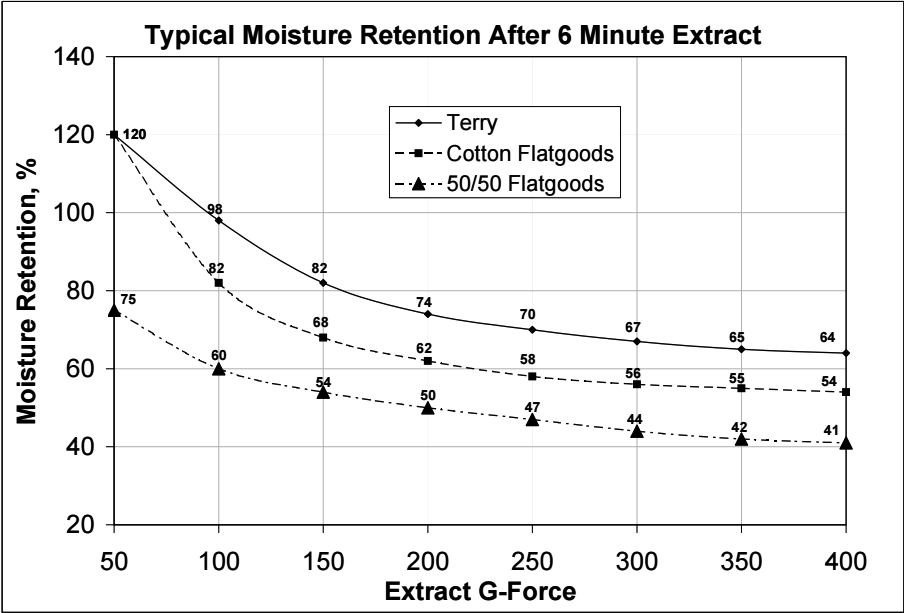 A quick calculation shows that my old-fashioned washer spins the laundry at about 100 Gs.  So my estimate for jeans is just above their 50/50 flat-goods line (whatever that means.)  Based on this chart, stepping up to modern front-loader (with typical spin force of 300 Gs) would only reduce the water load by about one-quarter.  That’s non-negligible, but I thought the effect of the higher G-forces of more modern front-loaders was higher than that.

The upshot is that a typical 15-pound load of dry laundry would retain about 10 pounds of water after the spin cycle, or about 5 quarts. Again, that’s based on my old-style top loader.

That squares nicely with drying time of about an hour, in the dryer.  Dryers typically take about 3500 watts, and evaporating five quarts of water would take about 3 kilowatt-hours of electricity.  And so, per the aside above, switching to more modern equipment with greater water extraction would save about 0.75 KWH/dryer load, or about 11 cents’ worth of electricity at $0.15/KWH.

The context is that, with today’s weather, I’m on track for using about four gallons a day to keep the humidity up in my house.  The current outdoor conditions (46F, 56% relative humidity) would yield about 25% indoor relative humidity at room temperature if no moisture were added. The fact that it’s windy adds to the burden through more rapid air exchange between the interior of my house and the out-of-doors.  The importance of air exchange was explained in Post #895.

The upshot is that laundry alone won’t keep my house humidified, but it certainly helps.