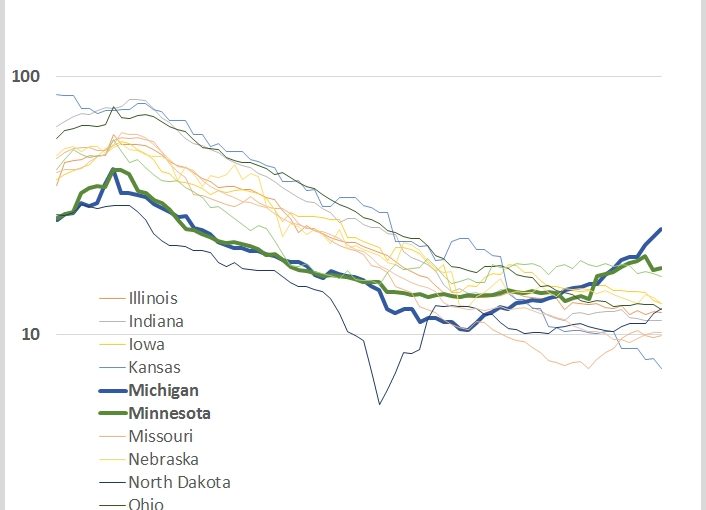 Anything about COVID-19 and children hits the “fear” nerve pretty solidly.  The U.K. variant is now being blamed for COVID-19 outbreaks in Michigan schools. I don’t think there’s any good evidence to suggest that Michigan’s current school outbreaks are due to the spread of the U.K. variant.

Are Michigan high-school outbreaks due to the U.K. variant?

Children and the U.K. variant?  I first became aware of the U.K. COVID-19 variant at the end of last year (Post #932).  At that time, I read that it seemed to favor spreading among school-age children.  (You can see that said, for example,  here.)  But I didn’t know what to make of that, because a) it didn’t make much sense and more importantly, b) later research dismissed that.  The story now is that the British found it among school children at first because schools were one of the few social settings in Britain that remained open when that variant was initially spreading.

So I don’t really know what to make of that.  Does it or doesn’t it spread faster among school children?  I think the most recent research says that the U.K. variant does not disproportionately attack children.

Michigan and the U.K. variant.  Second, I’ve been using the Helix COVID-19 dashboard to track the incidence of the U.K. variant in the U.S.  I knew that it didn’t cover every state, but because it is the only source from which you can infer incidence, I took it as the source of record. But they don’t seem to cover Michigan.

Problem is, per the U.S. CDC, there are a lot of U.K. variant cases in Michigan.  Michigan has the second-highest count of any state, although that cannot be interpreted as showing second-highest incidence.  That doesn’t show up on the Helix map, presumably because they don’t have working relationships with many Michigan labs.  And so I have been ignoring that.

The upshot is that the CDC dashboard suggests that the U.K. variant is highly prevalent in Michigan.  It’s just that it’s not clear how prevalent it is, based on what the CDC is able to show.

Michigan and children.  Third, as I discovered in Post #1055, Michigan’s new COVID-19 cases are now concentrated among high-school-aged children and young adults.  And now I’m seeing news reporting that is connecting those dots, and claiming that Michigan is seeing school outbreaks due to the U.K. variant.

I went to Florida to try to figure this out.  Florida appears to be leading the U.S. in terms of incidence of the U.K. variant.  And the short answer is that new cases in Florida are not concentrated disproportionately among school children. My conclusion is that whatever is going on in Michigan, that’s something unique to Michigan.  If the U.K. variant had some hugely disproportionate impact on school children, that ought to be showing up in Florida as well.  And it’s not.

New cases in Michigan are definitely on the rise.  So they may in fact be the first real test of what the greater infectiousness of the U.K. variant can do.  But I think it’s not correct to state that the school outbreaks there are due to the U.K. variant.