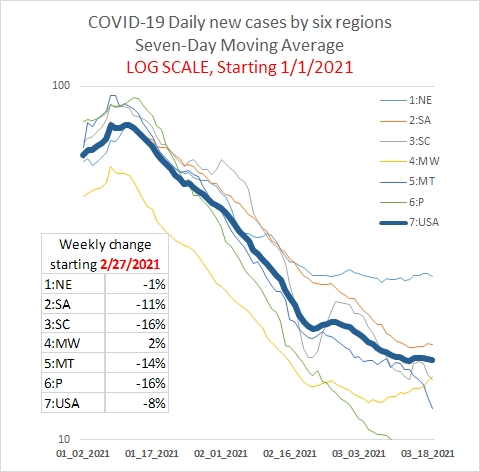 The current U.S. COVID-19 situation is best characterized as a race between more infectious variants of COVID-19, on the one hand, and COVID-19 vaccination, on the other.  Will we get enough people vaccinated, fast enough, to avoid a fourth wave of COVID-19 cases caused by the spread of these new, more-infectious variants.

My best guess is that vaccination will win (Post #1051).  For what that’s worth.  And you can find formally-trained epidemiologists that share that opinion.

But there’s still plenty of opportunity to pull defeat from the jaws of victory.  The situation is not helped by the states that are actively reducing COVID-19 hygiene.

I need to do a separate posting on the most common new variants in the U.S., because the U.S. CDC has greatly expanded the information they now provide.  (Or I was just too dumb to find it earlier.)

And so, while the daily new case count continues to drift downward, that in no sense reflects any common trend across states.  It’s just that, at present, states with falling case counts more-than-offset states with rising case counts.   In that sort of situation, that could turn around any day, just by chance.

The regional/national picture looks like this.  Six regions, six different trends.  The end of the rope continues to unravel. Michigan, Minnesota:  Michigan seems to be on a firmly upward trend, and maybe Minnesota is moving in that direction as well.  The rest of the Midwest just appears mixed.  Michigan, recall, has the second-highest count of U.K. variant cases among U.S. states, based on data maintained by the U.S. CDC.

But note the timing:  The upswing in Michigan cases began far too early for his to be a consequence of the U.K. variant.  The low point of reported new cases per day for MI was 2/21/2021.  But with all the lags involved, that means the actual rate of new infections in Michigan began to increase some time in the first week of February.  As far as I know, based on any data I have seen, that is far too soon for this to be the result the U.K. variant in Michigan.  That new COVID strain simply was not prevalent enough at that time to cause this type of change.

And, as discussed in earlier posts, the uptick in Michigan appears to be led primarily by outbreaks among high-school-aged kids, and secondarily by young adults.  The fact that schools are the focus of the increase in cases has become generally acknowledged there, and there seem to be a lot of people pointing to school sports as a main source of trouble.  (Source).  Looks like student athletes now have mandatory COVID-19 antigen testing before practices and games (Source).

And so, I’m sticking by what I said in earlier posts.  Whatever is driving the increase in new cases in Michigan, it appears unique to Michigan.  It does not (yet) appear to have any clear link to the U.K. variant. California:  After three straight months of a virtually-constant strong downward trend in new cases, there’s now a little hitch in the trend.  It’s far too soon to tell whether that’s an actual change in trend or not.

Again, mind the timing.  California long ago passed the point where more than half of its cases were the California variant B.1.427/B.1.429.  The CDC shows that 54% of California cases were from that strain, for the four-week period ending 2/13/2021.  If California new cases counts were going to start rising due to the prevalence of that strain, that should have happened a least a month ago. New York.  In an ironic twist, new cases counts are rising in all the Northeast states except New York.  Where New York was of concern due to a presumed high prevalence of the U.K. variant B.1.1.7.

But recently reported numbers from CDC show that, in fact, New Jersey had three times the prevalence of the U.K. variant (B.1.1.7), compared to New York, in the four weeks ending 2/13/2021.  So, plausibly, I’ve been watching the wrong state.

That said, the CDC-reported prevalence for that period, for New Jersey, was so high (9%) that New Jersey should long ago have passed the point where more than half of its cases were the U.K. variant.  And yet, New Jersey is seeing a modest rate of increase in new cases per day. Florida:  Still trending down, slowly.  The rate of decline there is slightly lower than for the rest of the South Atlantic states.  But, so far, there’s nothing truly exceptional.  And they almost certainly should have passed the point where more than half the cases are the U.K. variant. Arizona, Nevada.  The Mountain region shows a strong downward trend of late, due to these two states.  Again from the same CDC data source, both of these states already had a very high prevalence of the California variant (B.1.427/B.1.429) months ago.   (That would be 25% and 41%, for Arizona and Nevada, respectively, for the four weeks ending 2/13/2021). Texas and the South-Central region.  Other than some ongoing data-reporting “speed bumps”, there’s just a slow downward trend in daily new cases.

Summing it up:  There is no strong trend nationally, and that reflects a lack of uniformity across the states.

Michigan is clearly having a problem centering around schools (and plausibly school sports).  You might see somebody try to attribute that to the presence of the U.K. COVID-19 strain in that state.  But the timing of the start of the increase and the concentration among school children both argue otherwise.

With the possible exception of New Jersey, we aren’t seeing any significant uptick in new cases where we would expect to see it, based on the notion that these new variants are considerably easier to spread.

Plausibly, vaccination is suppressing infections enough to mask the impact of these more-infectious variants.  As noted at the outset, the numbers do, in fact, work out that way, on a national-average basis.

But that’s a weak explanation, because that would only explain a national trend.  It really does not explain why there are no systematic differences across states that have vastly different incidence of these presumably more-infectious variants.  Vaccinations are proceeding apace across the states.  There’s really scant difference between (say) the 10th percentile and 90th percentile states, in terms of proportion of population vaccinated.  But there are very large differences in incidence of these COVID-19 variants of concern.

And so, at some point, all I can do is shrug.  If there’s some underlying pattern here, I surely can’t see it.  I surely see no evidence that we’re on our way to a fourth wave.  And I see no end of this in sight, either.