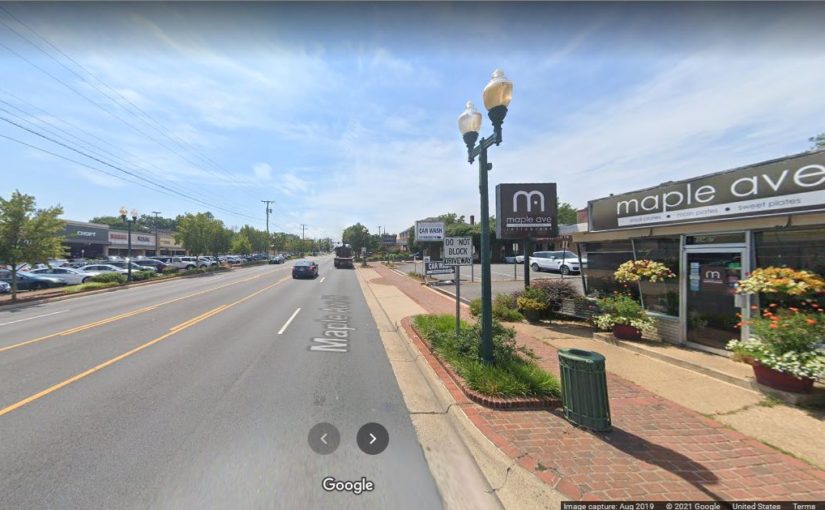 Note how vastly better the right-hand side of the road looks, due to the absence of power lines. /s

The question here is, how much would it cost to take all the utility lines along the main thoroughfare in my home town (Vienna, VA) and put them underground?  This is about a 1.5 mile stretch of five-lane urban arterial road, and is the main business district in Vienna.

The Town just got the official (gu)esstimate from their consultant, who puts the cost at a mere $22M.

I just cannot bring myself to read the details of that report.  Not just because I’d already figured that out two years ago — see below.  It’s mostly because I finally realize that it just doesn’t matter.  It could have been ten times as much, and it still will not affect one single decision the Town will make.

And it’s this decide-first-think-later tactic that makes the Town’s staff’s decision to build itself a new Town Hall so dangerous.  I assume that you all knew this was in the works, because of course you read the details buried in proposed RFPs for work that will be used to justify spending your tax dollars.  Don’t you? Yeah, I exaggerated that for effect.  The idea that things have been decided, in the paragraph above.  Ask Town staff about it, and I’m sure you’ll be told not to be alarmed.  There’s nothing actionable there.  No decisions having been made yet.  Who said anything about a decision?  This is just routine due diligence.

After all, the Town has already said that it bought that tract of land (the church next to where the police station was) with no purpose in mind.  So of course that means that there is no purpose in mind for that.

But if you watch the Town bureaucracy carefully, you’ll realize answers like the paragraph above are just SOP.  And because of that, all of those soft words provide exactly zero information.  Once you realize that, you realize that your sole option is to take a guess as to what’s really going on.  As of right now, I’d guess we’re slated for paying for a new Town Hall in the near future.

Anybody recall the last piece of property the Town bought for no reason (Post #526):

That Trompeter guy picked up on the last “no reason” Town purchase.  I’d bet he’s figured out the new Town Hall as well.  If you don’t like my opinion, why not ask for his?

But I digress.  This post is actually about lipstick on a pig.  The only interesting part is that it’s $22M worth of it.

Two years ago ( Post #210 , March 26, 2019) I estimated that it would cost about $25M to put the utilities underground along the commercial district on Maple Avenue.

That estimate took me maybe two hours to work up, based on readily available public information using solid local benchmarks.  In the end, there was not, really, a lot of variation in the cost estimates.  So it wasn’t rocket science to take a per-mile cost, and multiply by the number of miles involved.

(I would have bet that Maple Avenue would have cost far more than average.  So a mere $22M seems low.  I wonder if the Town’s consultant knew that the goofy way we’re going about this requires that we bury the utility lines separately on both sides of the road, the way that no rational municipality would?)

But if I hadn’t bothered to invest the two hours or so it took to work up the data for that estimate, the Town of Vienna would have never asked this question.  Because, although they will never admit to it, my focus on this issue and the obviously high cost is what goaded them into finally taking a look into it.  Years after they had mandated it without estimate the cost.

And now we have to start peeling back the onion.

Why did I bother to do that estimate?  Under the now-repealed “MAC” zoning, the Town was forcing all contractors to pay for putting utilities underground piecemeal.  (Well, legally, the contractors voluntarily “proffered” that, but that’s a fiction.  It’s straight-up extortion.)  But while the Town claimed that only a few properties would be developed, the Town literally had no plan for finishing off the job.  So, the Town was simultaneously extorting the money out of redevelopers and turning a blind eye to the eventual public cost of finishing off the job.  Worse, the Town had started itself down this path without even bothering to ask how much it would cost.

(The same was and is true of the piecemeal sidewalks that would have resulted from redevelopment under that now-rescinded standard.  The Town had no plan and no cost estimate for connecting those together.  And so, even now, the plan, or lack thereof, is to have beautiful broad brick sidewalks randomly interspersed with standard 5′ concrete ribbon sidewalks.)

Here’s the main point:  If you don’t know the cost, you can’t even start to do any sort of rational cost-benefit analysis. Which is, as I see it, the job of our elected officials.

Just as benchmark on the cost-benefit side, you know these $1400 COVID-19 stimulus checks?  Seems like a fair bit of cash? Well, that $22M works out to be about $4000 for every family in Vienna.  Maybe eight times (what used to be, annual non-sewer-and-water) capital spending by the Town of Vienna.  And that’s to put those utilities underground only on that one street.  And, only some of the utility lines.  The large higher-voltage transmission lines that cross the street in several places would remain.

Somebody had to ask the awkward question of “how much will that cost?”.  Before the Town can ask the more sensible question of “is it worth it?”.

And, for asking those obvious questions, and pointing out some huge problems with the now-rescinded MAC zoning (as in, things that the Town thought were legally binding were not), the Town thanked me profusely.

Yeah, I just lied again.  What actually happened is that a Town official, in a public meeting, characterized me as “poisoning the atmosphere” regarding zoning questions in the Town.  Because I bothered to do my homework, when the Old Guard here didn’t want to see that done.

Oh, wait, did I forget to mention that Vienna is redoing all of its zoning?  During a pandemic.  When it’s not possible to hold actual in-person public meetings.  About decisions that will permanently reshape the entire town.

Yep.  That’s pretty much Town of Vienna government in a nutshell.

During a pandemic.  When actual public meetings are not possible.

Did I mention that before I started ostentatiously taping and posting Town meetings, the Town typically took months to provide any public record whatsoever of Town meetings?  So it’s not like this “keep it out of the public eye” approach is anything new.  I had to embarrass them by publicly posting recordings of the meetings, in order to get them to do what they should have been doing in the first place.  For which, of course, they awarded a medal for special services to the Town.  (/s, in case that wasn’t totally obvious.)

But, at least, credit to the current Town Manager, they’ve continued to post recorded material in a timely fashion.  (Or at least, were doing so, the last time I bothered to check.)  So those indexed recordings weren’t a total waste of time. All I can say is, thank goodness for the Virginia Freedom of Information Act.  Even if the Town of Vienna likes to use a procedural loophole to keep the public in the dark about their decision-making, when it suits them.  (See Post #480, The Virginia Freedom of Information Act and Noah’s Ark.)  But only rarely.  As far as we know.  But how would we know?

Again, I digress.  Back to the lipstick.

And so, the back story is that a) the Town mandated this without costing it out, b) they did not have (and still do not have) any plan for finishing off the utilities or sidewalks post-redevelopment, c) and the only reason they bothered to find out the cost was because somebody “poisoned” things by asking the obvious question.  I.e., how much is that gonna cost?

Now that this cost is officially known, and the Town Council has had time to react to it, what was the response (per news reporting)?

But, in the main, near as I can tell, absolutely nothing changed in light of this.  Town Council saw it, the said some stuff, and everybody is going to move on as if it had never happened.

There was a time when I thought better of my Town government.  When I assumed that, given information on cost, there would be some thoughtful consideration to value and the cost-benefit tradeoff.

That’s soft-headed nonsense.  The only thing that’s going to bring some sense of value to the discussion is to cut off the money.  Rescind the meals tax, in light of the hardships Town restaurants face due to the pandemic.  That’ll get people to wise up, because it’s only by dint of the revenue flow from the meals tax that the Town can play so fast and loose with its capital budget.

In any case, short of cutting off that endless stream of money, I no longer think that the Town is capable of doing any sort of cost-benefit analysis.  I think that what looks like irrational decisions, made out of the public spotlight, are, in fact, just that.  And that there’s just a whole lot of free money that needs to be spent.  Or some wiseacre will start talking about reducing existing taxes.

And that’s not going to change.  One way or the other, from some funding source or the other, regardless of value, Maple Avenue is going to get its $22M worth of lipstick.  It’s just the way it is. Sure hope they get a better architect for the new Town Hall than they did for the new Library.  Or maybe we can start a trend, and put all of our public buildings under parking garages.  Maybe put up a garage where the old Town Hall used to be.  Because walkability is the key to our new Downtown, and that’s why we need to make such an accommodation to parking.  But never mention traffic. Or something.

And I digress yet again.

Utilities run down the length of the street.  They aren’t attached to each property separately.  They are public utilities. What is the plan, exactly, for dealing with them?  Or not.

On second thought, I am not even going to ask.  I guess I just don’t care enough.  I wonder if anyone else does? Source:  Beautiful new “gathering space” in the Town of Vienna.

Lucky for me, I find transformers adjacent to the sidewalk to be quite attractive.

OK, that last bit, that’s just mean.  Everybody involved sees this last one as a mistake, and for that one, I think the Town won’t let that happen again.  I think.