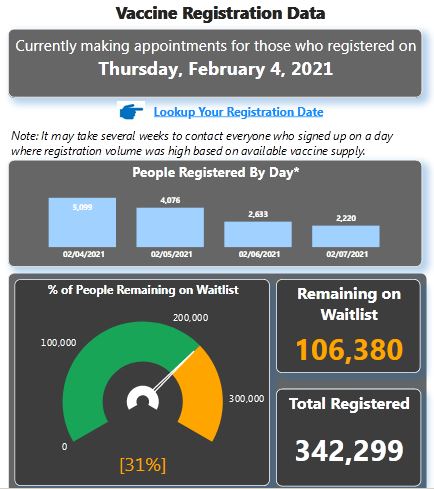 My wife and I went to the arena yesterday to claim our COVID-19 vaccinations.   Tip: Don’t go for the cornucopia.

This post is, in part, a point of reference for Fairfax County residents who are looking forward to getting the COVID-19 vaccine.

But in addition, there’s a little armchair analysis of the national vaccine situation.  In particular, when are we going to hit the limits of vaccine acceptance?

Looks to me like some states may already be hitting the limit on the fraction of the elderly who are willing to be immunized.  Virginia among them.  And so, it would not surprise me if we were nearing the limit nationally.

As of today, two-thirds of the U.S. age 65+ population has been vaccinated against COVID-19.  And maybe that’s about as good as it’s going to get.

See the just-prior post for an important note about scheduling an appointment in Fairfax County.  It doesn’t look like it, but you can choose your location for receiving the vaccine.  If one site has no appointments open, choose another.

You can check the status of the waiting list and see what sign-up day is currently being scheduled for appointments on this Fairfax County webpage.  At their current rate, it looks like Fairfax will take another four weeks to clear the entire backlog under Phase 1b.   At which point, there’s another small tranche of essential workers under Virginia Phase 1c.  (The phases are defined on this web page.)  And after that, anyone can sign up.

One thing I found surprising is that the sign-up is all based on an honor system.  Nobody checks the information you supply to claim your place in the line.  So, as with our state-wide mask mandate, we again have this odd combination of rigidly defined rules with zero actual enforcement.

It’s worth noting that there is no State-wide vaccine phase in effect.  Each county (or health district) acts independently of the others.  A handful of Virginia counties are already in Phase 1c, as you can see on this web page.

Why those counties are in Phase 1C is a subject for analysis below.

My wife and I got our first shot of the Pfizer COVID-19 vaccine yesterday at the George Mason University indoor arena.  Parking was easy.  Door-to-door time was 40 minutes, of which 15 minutes was the post-vaccine waiting period.  They didn’t ask for insurance information.

The only negative in the whole experience was my fellow citizens, many of which still either don’t know how to wear a mask, or don’t care.  An appallingly large fraction of the crowd was wearing crappy blue disposable masks and/or wearing them so loosely as to do next-to-no good.  There was, of course,  the inevitable jerk wearing a mask below the nose.

And then there’s beards.  Guys, what’s the point?  If you have a beard, your mask does more-or-less no good.

The important fact here is that we had no choice of where we stood.  It was more than a little unsettling to have to share a space with a large crowd of mask-illiterates.  Sure, we see the clueless and the careless in stores every day.  But in stores and similar spaces, you can dodge the dummies who aren’t smart enough to know how to wear a mask.  Not so in the vaccine line.

One aspect of yesterday’s experience that stands out in hindsight is that the line was all middle-aged and younger.  My wife and I were clearly just about the oldest people in line yesterday.  To me, this suggests that maybe most or all of the elderly who want a vaccine shot have probably already gotten one.  At least, in Fairfax County.  And that’s what prompts the final section of this post.

In a nutshell, zero complaints about the vaccination process itself.  It ran like clockwork.

Vaccine acceptance, the elderly and Vaccine Phase 1C in Virginia and elsewhere.

Now that the vaccination programs are rolling along, the next thing to look for is the point at which we hit the limits of vaccine acceptance.  That is, the point at which nobody else within a well-served population chooses to be vaccinated.  And the obvious (really, only) place to look for that is among the elderly.  As they were given priority for vaccination more-or-less everywhere.

So, the question is, are vaccination rates among the elderly stalling out yet? Or do they continue to be vaccinated at a rapid pace?

This is a surprisingly hard question to answer, for two completely different reasons.

First, nobody provides the data on historical vaccination rates by age.  You only get a glimpse of the past number to the extent that somebody bothered to put that down in print.  Near as I can tell, there is no data source from which you could simply graph the day-to-day progress.

In a normal, unconstrained market situation, it’s pretty easy to tell when you’ve “saturated the market” for some new product.  You’d see a lot of demand at first, and then it would slow to a trickle.  When you saw the rate slow, you would know that you’d saturated the market.  If you will, it’s like pouring water out of a bucket.  There’s a heavy flow, then it quickly tapers off as the bucket empties.

Here, by contrast, we’re looking at a constrained rate of vaccinations.  The rate of daily vaccinations is already a trickle.  It’s slowed by the overall capacity limit.  We won’t know we’ve saturate the market until that trickle stops.  That’s more like emptying your gas tank, with no gas gauge.  The car runs at a steady pace until, all at once, it runs out of gas.

Between those two constraints, the best we can do is verify that vaccinations among the elderly continue to trickle in.  So we have not (yet) reached the limits of vaccine acceptance in that segment of the population.

The CDC will tell you the fraction of the elderly that have been vaccinated, as of today. But if you want to know what that fraction was, some weeks ago, you have to scrounge around and see if somebody happened to have mentioned it in print.  On 2/25/2021, that figure stood at 41% (Reference).

And so, averaged over the last 21 days, the vaccinated fraction of the U.S. elderly has risen an average of 1.2 percentage points per day.

Similar to the U.S. situation, Virginia does not provide historical data on vaccination rates by age.  I just happen to have an old screen shot that I can compare to today’s data.  Here’s how things stood in Virginia, exactly two weeks ago versus today: And so, averaged over the last 14 days, the vaccinated fraction of the Virginia elderly has risen an average of 0.7 percentage points per day.

Transition to Phase 1C as a signal.

In Virginia, vaccination Phase 1B is the phase that allows all persons age 65 and older to be vaccinated.  I think that matches (or nearly matches) most other states.  And so, this question is really about the fraction of the elderly that are vaccinated at the time a county or state decides to move along to Phase 1C or Phase 2 of vaccination.  Because, in general, the decision to move beyond Phase 1B means that they think they’re pretty well done with vaccinating the elderly.

Some states have already made that decision.  Texas, for example, recently opened their vaccination to everyone age 50 or older, but by my calculation 59% of the 65+ population of Texas has been immunized (calculated from the data posted here, and Texas population data from Census).  Similarly, Arizona has opened vaccination to the 55+ age group, and again by calculation, 66% of the 65+ population of Arizona has been immunized.

But what about those Virginia counties that have reached vaccination stage 1C?  Are they exceptionally good at vaccination, or do they have a low fraction of the population willing to be vaccinated?

Virginia’s guidelines for moving to a new phase make it clear that you have to be running out of people to vaccinate, in the existing phase, before you can move to a new one.  That’s part of this announcement regarding counties moving to phase 1C, (emphasis mine):

What I find particularly interesting is that, given those guidelines, the state expects to see all counties move along to Phase 1C “within weeks”.  (That’s in the notice cited just above.)  To me, that means that vaccination of the elderly in Virginia is starting to wind down, with around 60% of the 65+ population vaccinated.  Or, not remarkably different from Texas and Arizona.

Here’s a map of the counties that have already transitioned to Phase 1C in Virginia: You should not make much of the fact that these are geographically clustered.  This is actually mapped by Virginia health region, and some regions involve several counties. That said, by eye, it looks like we’re looking at some of the ultra-conservative areas of the state.  The area around, say, Danville on the southern border of the state is very much a part of the Old South.

These areas are not exceptionally good at vaccinating people.  They are average, as shown below.

I doubt that the Phase 1C counties simply lack for old people and front-line workers.  If I had to guess, by eye, these appear to be conservative areas of the state that probably have a lot of people who just don’t want to get vaccinated.

Using the Commonwealth’s excellent website tools, I can say that, as a group, these counties transitioned to Phase 1C with less than 60% of the elderly vaccinated.  Like so: I can’t be 100% sure, but this suggests to me that they aren’t expecting to see a whole lot more than that.  And so, once again, I seem to be stumbling across this number somewhere around two-thirds. That somehow, in a lot of areas, it looks like that last third of the elderly just isn’t going to bother to get vaccinated.

I find that hard to believe, given the prevalence of hospitalization and death from COVID-19 among the elderly.  The last time I looked, one percent of the entire elderly U.S population had been hospitalized for COVID-19.  With those odds, one-third won’t take the vaccine?

In any case, once you stumble across the same number, over and over, you sort of get the drift that maybe this is real.  Maybe somewhere around a third of the elderly will simply refuse to be vaccinated.

That’s clearly going to vary by location.  In Minnesota, for example, they’ve already gotten 77% of the elderly vaccinated. But health care in Minnesota is fairly exceptional in a lot of ways.

I suspect that the typical U.S. state looks more like  Virginia.  And if that’s true, we’re nearing the saturation point of COVID-19 vaccination among the elderly.

In any case, for my sample of one data point, that’s how it looked yesterday, when I got vaccinated.  Hardly an older person in sight.  And if that’s reflective of the average, I would not expect the share of elderly Virginians who are vaccinated against COVID-19 to rise much higher than the current level.

In all likelihood, this is as good as it gets.  We’ll just have to deal with it.