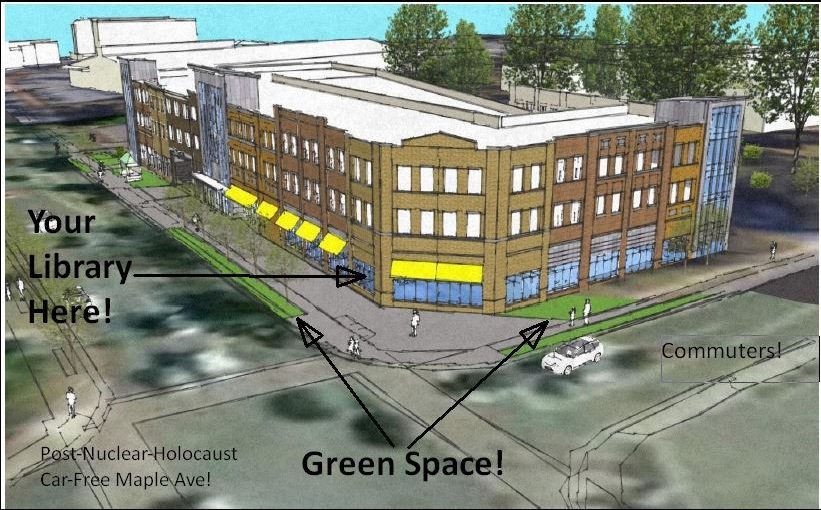 The Town of Vienna is now well along on its plans to become Tysons South.  Or perhaps Little Tysons.  The new Town-wide rezoning is being structured to encourage the center of the Town to be converted to a high-density housing district.  The Comprehensive Plan is being rewritten to accommodate the new zoning.   And then, later this year, Town staff will cram all that down Town Council’s throat and dare them not to pass it.  All nice and legal.

One unfortunate early casualty of this is the Patrick Henry Library.  Even as one Town Council set us on this current rezoning path, the next followed in their footsteps and decided to finalize the idea of putting the new Patrick Henry Library underneath a big concrete parking garage.  Like so.  That’s the library, with the yellow awnings.  And that’s the Town of Vienna municipal parking garage on top of it.

I guess I am alone in thinking that’s a truly God-awful design for a library.  I’ll just point out that you can search the entire DC metro area, and you will not find another pubic library built under the first floor of a parking garage.  And when you see something like that — where nobody else does that — there’s probably a reason for it.

And, sure, nothing has been settled yet, and Fairfax County needs to be involved, and fill-in-further-soothing-words.  But near as I can tell, at present, this is the one and only plan for the new Patrick Henry Parking Garage (and library).

(And, to be fair to Fairfax County, a) Fairfax determined that the existing library is outdated and must be replaced but b) this is our design, not theirs. This was developed by architects hired by the Town of Vienna, to ensure that this met the desire for parking.  Fairfax County, by contrast, has a long-standing history of producing libraries that are award-winning pieces of architecture.  But that’s going to be tough to do if the library is an afterthought on a parking garage.)

Why, you might ask, do we need a parking garage that size on Maple Avenue in the Town of Vienna?  It’s not as if the Town actually did a needs assessment to determine how many spaces we might need in that area.  Instead, they figured out how many spaces would fit on that lot.

The answer is that this garage isn’t for the existing Town of Vienna.  It’s for  Tyson’s South, the replacement for the existing core of the Town of Vienna.  One former Town Council member went so far as to say that the spaces in that municipal garage could be sold to the (forthcoming) redeveloped properties on Maple, and so relieve them of the need to build their own parking to serve their own buildings.

So, to put it in a nutshell, that new Patrick Henry Library fits in with Vienna-as-Tyson’s South.  It’s a brutalist urban parking garage, with brick veneer, subservient to the future need for commercial parking in that area.  And so, it will fit right in.

Oh, and it’s also a public library.  I guess.   But that’s really secondary.

Separately, the Town bought three acres of land just up the street.  This is the site of the former Baptist church, across from the ball fields, adjacent to where the police station was.

Looks like the plan is that the Town staff want to build themselves a new Town Hall there.  (Although, of course, no decisions have been made, nobody’s even talking about a decision yet, but we certainly can’t rule anything out while our trusted contractor gives us a report telling us what we want to hear, and so on and so forth.)

But here’s a concept for your consideration:  Let’s move Patrick Henry Library there instead.  All you would need is a little extra sound-proofing.   (Instead of being one block down the street from the VVFD, it would be across the street.)

This way, the new Tyson’s South could build a big, ugly parking garage to serve the commercial interests along Maple without having to compromise the design to accommodate a library.  And the people of the Town of Vienna could still have a nice library, instead of something stuck underneath a parking garage.

More to the point:  These buildings likely will stand for half-a-century.

With the proposed rezoning, that stretch of Maple is going to be tall “mixed use” apartment and condo blocks.  It won’t be the open streetscape that you see today.  It will be like Tyson’s, but shorter. It’ll be Little Tysons.  But without the road capacity to handle the traffic, as Tyson’s has.  Because, as with the previous MAC zoning, the Town has once again decided to turn a blind eye to traffic.

In fact, the Town is not subjecting this Town-wide redevelopment to “Section 527” review by the Virginia Department of Transportation (VDOT).  I’m sure they can give you all the legal reasons for that.  But the intent of Section 527 was to force people to take a hard look at the impact of development on existing arterial roads and, if necessary, determine how those roads would have to be changed to accommodate the additional traffic from development.

So, the Town can dodge a 527 review.  Unfortunately, reality has a way of rearing its head regardless.   And I’d bet that, right along with the apartments and condos of the new Tysons South, VDOT is going to have to widen Maple Avenue anyway.  Luckily, the planned broader sidewalks for the Tyson’s South version of Maple Avenue would provide plenty of room for expanding Maple by another lane or two.

And so, if you look to the future and see Maple Avenue not as part of Vienna, but as the new Tyson’s South that we are trying to make it, I’d say it may be time for some strategic retreats.  And, since the County is going to tear down that library in any case, and the Town conveniently owns a parcel of just about the right size, just up the street, I’d say, this might be a good place to start.

At this point, I’m tempted to wander off into a screed.  So let me end it here.  If we’re bound and determined to remake the core of Vienna into Little Tysons, so be it.  But instead of squashing the library under a parking garage, so that it fits into this new vision of Vienna, I say, let’s move it a block-and-a-half away.  Let the the library be a library, let the parking garage be a parking garage.  And don’t mash them together just because that’s what was expedient two years ago.