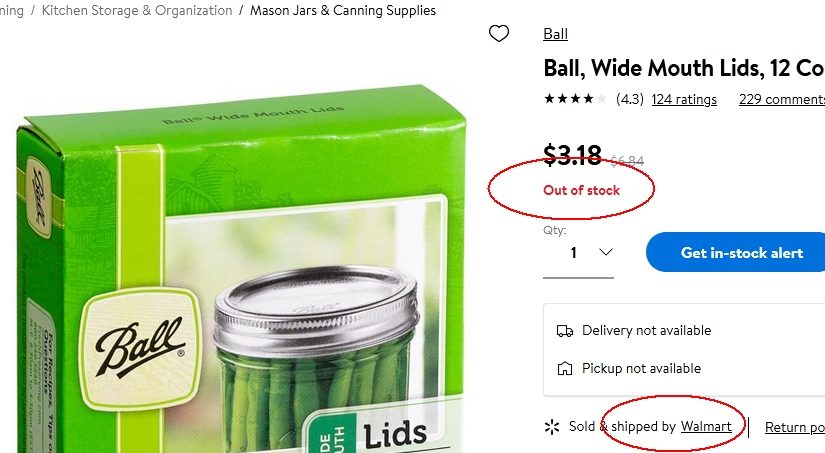 The final section of this is now a list of options you might consider trying if you can’t find Ball/Kerr lids locally.

I figured the lid shortage was over.

I watched a presentation yesterday on YouTube, the focus of which is the ongoing shortage of canning lids in the U.S.A.  These lids aren’t re-usable, so if you do home canning using traditional (“Ball”) lids, you need a steady supply of them.

You may not hear about it much right now, as it’s not canning season.  But after looking into it, I think that’s sort-of true.  But only sort-of.  If you’re willing to pay a premium, or use no-name lids, there’s no shortage.  (See Amazon below).

But the very idea of a brand-new shortage is a little odd.  Nearly all other shortages of low-tech consumer goods were sorted out last year.  And it’s unsettling to see news of a shortage of a good for which there are nearly no substitutes (other than Tattler lids, which themselves appear in short supply).

After looking at the crazy current prices for lids (see below), I’m betting that the great lid shortage of ’21, such as it is, will not persist.

My explanation is that we’re seeing the impact of the seasonality of new product shipments by U.S. manufacturers.  In effect, this isn’t a shortage of domestic canning lids for the 2021 canning season.  It’s the last gasp of the 2020 canning season.  The 2021 season hasn’t started yet.  And when it does,  I bet that the lid shortage disappears entirely.

In this post, I lay out the evidence for that conclusion, such as it is.

A shortage of canning supplies made perfect sense last year, following a surge in home vegetable gardening during the pandemic (Post #G21, August 2020).  Demand was way up and there’s a long lag involved in ramping up production.  Manufacturers saw the shortage coming but there wasn’t much they could do about it.

The canning supply shortage didn’t stand out, because it was just one of many shortages that year.  A lot of long-standing supply-and-demand relationships got knocked out of whack during the pandemic.

But now?  Shortages of common household goods are a thing of the past.  And it’s not as if those lids are some high-tech product made from exotic materials.  For the life of me, I can’t figure out why this shortage, and only this shortage, seems to have persisted to 2021.

Crazy market-clearing prices are an echo of the past.

How crazy are market-clearing prices right now? The canners among you will immediately get the joke.  These are from the Walmart website, today:

That’s right.  A dozen lids costs about 50% more than a dozen jars.  The joke being, jars come with lids.

This, I think, truly classifies as an example of tail-wags-dog.  If you need a dozen lids, you can pay $15, or pay $10 and throw away those pesky free jars that come attached to your precious lids.

And, as odd as that is, it’s weirdly similar to the the last Great American Canning Lid Shortage, circa 1973-1975.  Per the reporting below, a great wailing arose from the land over the lack of lids, yet the storehouses were replete with jars.  Which then, as now, came with lids.

Source:  New Your Times, 1975, (Per this article, which will be paywalled if you are not a subscriber).

And so, then as now, it’s all about the cost.  In 1975, you could get lids by buying jars, but that would cost you about five times the expected price for lids alone.  And guess what?  The last time I bought lids in quantity, just a few years ago, I paid less than 25 cents per lid.  Currently, the market-clearing price for name-brand lids, per the listing above, is somewhere around five times that amount.

But if you look on Amazon, you’ll see that (surprise) foreign suppliers are stepping in to address the shortage.

It still appears to be hard to get (e.g.) genuine Ball or Kerr wide-mouth lids.  But they can be had for what appears to be a minimum price of around $0.60 per lid.  If you are willing to pay as much as $0.75 per lid, it looks like you have several suppliers willing to provide them in quantity.

But if you are willing to go with no-name (and apparently foreign-made) lids, you have your choice of suppliers at under 30 cents per lid.  That’s even if I limit it to product shipped by Amazon, with a reasonably close delivery date.  Such as this listing.  Just read the reviews before you buy.

The other completely parallel aspect of the 1975 shortage is that manufacturers saw it coming because they saw seed sales soaring.  That’s also noted in the NY Times article cited above.  And that big uptick in seed sales was also noted in 2020, to the point where our local hardware stores were denuded of garden seeds.

I’m not seeing any evidence of a seed shortage this year.  I’ve shopped the racks at both Home Depot and the Merrifield Garden Center.  I’ve mail-ordered some open-pollinated (“heirloom”) items.  And nowhere have I spotted any evidence of the seed panic-buying that plagued gardeners last year.  The seed racks are full, the mail-order turnaround times are quick.

That said, others are seeing such shortages, such as this article from the University of Minnesota.  (You see a lot of articles speculating that there might be a shortage, but little in the way of hard data or actual observation.)  You can see sporadic evidence of 2021 seed shortages reported elsewhere, as in this article.  Or in this article.

None of that is definitive.  But as I read it, the consensus is that there are in fact a lot of new vegetable gardeners out there.  They started during the pandemic, and it looks like they are going to keep at it.  That’s my story, in a nutshell.  I put raised beds in last year to have something to do.  And now that I have them, I’m going to keep using them.

So I’d say the jury is out on having a seed shortage this year.  But there does appear to be a widely-expressed sentiment that the pandemic caused a persistent increase in home gardening.  And that should, I think, lead to a permanent increase in disposable canning lids.

That mid-1970s lid shortage lingered for several years, starting with the 1973 first energy crisis (the Arab Oil Embargo) and reaching a peak in 1975.  But that was a consequence of lingering energy shortages and lingering economic hard times.  And, I suspect, of vastly less international trade in things like canning lids.

But I’m betting that, unlike the 1975 lid shortage, the 2020 lid shortage will turn out to be a one-and-done.  The current situation isn’t like the lingering energy crises and recessions of the 1970s.  The proximate cause (the pandemic) is on the wane (we hope), even if some people will continue to garden after the pandemic is over.  The U.S. economy isn’t in a lingering recession (we hope).

And even now, there’s no true shortage, in the sense of absolute un-availability.  You can, in fact, buy name-brand lids on Amazon.  You just have to pay quite a bit for them.  And you can buy generic (and presumably foreign-made) lids, in large quantity, for what I would call “the usual price” of around $0.25 or so per lid.

That said, things are a little crazy.  You’ll see genuine offers of Ball lids at a price that exceeds the cost of a jar and lid combined.  But there’s no reason to panic-buy those.  Or to panic-buy any other lids.  If you’re worried, go to Amazon, put in an order for what you think you’ll need this year, and buy yourself some peace of mind.  In the overall scheme of things, lack of canning lids just isn’t a problem worth worrying about.

I’m not claiming this list below is exhaustive.  This is just a few options that I ran across, that will work with U.S. Ball/mason jars.  I’ll reference the post where I wrote up each item.

All my prices below are for widemouth lids.  For reference, a “normal” price at Walmart for Ball brand widemouth lids is about $0.27 per lid.  Walmart also carriers a much cheaper store-brand lid.

Buy re-usable Tattler lids, for about $1.00/lid.  Bear in mind that your cost per use will be much less than that.  I use these occasionally myself.  They operate a little differently from Ball lids.  Follow the directions and they work as advertised.  Writeup was in Post #G21-010.

Buy re-usable Harvest Guard lids, for about $0.76 per lid.  Bear in mind that your cost per use will be much less than that.  These appear to be Tattler knock-off lids.  Writeup was in Post #G21-010.

Buy U.S.-made (Ball/Kerr) single-use lids in bulk from Amazon, about $0.70 per lid.  You will see many offers at around this price, as long as you are willing to buy (say) five dozen or more lids at a time.  Always read the reviews first.  In this case, check that nobody suggests that these are counterfeit or knock-offs instead of genuine Ball/Kerr lids.

Buy single-piece (and probably single-use) U.S. made lids suitable for water-bath canning only.  About $0.50/lid.  I’ve never used these but the reviews on Amazon are quite good.

Buy foreign-made single-use lids via Amazon, for about $0.30 per lid, in bulk.  You have your pick of offers at that price, but quality sure seems to vary a lot.  Check the reviews before you buy.

Updated 7/21/2021:  This next bit is obsolete.  Last time I checked the Walmart website, they no longer had canning lids listed.

Check whether or not Walmart will ship you up to three 12-packs of lids at the normal price.  When I checked a random sample of Walmarts to see what fraction had lids in stock (15% of stores, at that time, Post #G21-025), I found that Walmart’s policies on shipping lids varied from place to place and from week to week.  If lids are out-of-stock in your local stores, Walmart’s website generally allows you to order up to three 12-packs of lids.  You’d need to fill out an order of $35 worth of goods to get free shipping on that.  (The limit of three packs per order is enforced by their software — I couldn’t figure out a way to fool it.) Check other retailers with on-line ordering.  For example, my local Walmarts are out-of-stock today but my local Ace Hardware is willing to ship lids, delivered from the local store.  My local Safeway has them in stock and will deliver (at $5 a box), as does my local Giant Food.  Uline (an industrial packaging supply company) will apparently allow you to order up to 10 packages of lids (at $5 a box plus shipping).  But many other stores in my area will not ship, including: Tractor Supply, Bed Bath and Beyond, Southern States,  Target, and so on.  It’s completely hit-or-miss, as far as I can tell.

Re-use lids:  Free, but risky.  I cannot recommend that, for fear of being sued.  The best write-up I found on lid re-use was from the blog A Traditional Life.  I tested her recommendation to boil lids for 20 minutes, and that does in fact eliminate the groove in the rubber seal.  The results are shown in Post #G21-009, but the picture of the un-boiled (left) and boiled (right) lids tells the entire story.