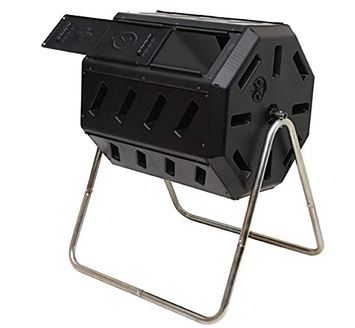 This is a brief note on everybody’s favorite topic, rotting garbage.  I mean, composting kitchen waste.

Our household generates a fair amount of compostable kitchen waste  It’s nothing unusual:  Vegetable peels, coffee grounds, and the like.  But it’s enough volume that it’s well worth composting for the garden.

Over the years, I’ve tried a variety of methods for composting my kitchen waste.   All the ones I used to use were failures, to a greater or lesser degree.

Sometime the failure was due to the equipment.  But more often, it was operator error. Because, when you get right down to it, who in their right mind wants to deal with composting kitchen waste?  It’s way too easy to say “I’ll take the compost out tomorrow”, particularly if it’s a nasty job.  And if you ignore a composting system that needs some TLC, it’ll let you know about it.

It was only when I more-or-less gave up on the gizmos and the tricks that I stumbled across a system that works for me.  It was really a question of channeling my inner sloth.  So I thought I’d share what finally worked for me.

First, in the kitchen, I finally gave up on using any kind of special container (sealed or not), “compostable” bags, and whatnot.  Every system I ever tried eventually stank and/or was too much effort. All of them eventually needed to be cleaned, which is a chore that rates anywhere from boring to puke-inducingly nasty (if the compost has gone anaerobic at some point).

Instead, I use a small cardboard box lined with a couple of disposable grocery bags.  I dump the scraps in that.  That’s it.  That’s what sits on the kitchen countertop. Looks like it’s high time for my spouse to take out the compost.

Now, despite how crude this is, there are several advantages of this over most commercially-made containers for kitchen scrap composting.

First, it’s not a one-size-fits-all-kitchens system.  Instead, you size the box to fit your rate of accumulation.  The idea is to force yourself to take that compostable material outside every few days.   Three?  Four?  Something like that.  Pick a box that fills in that time.

Third, the scraps stay aerobic.  By not enclosing them, you let the air continue to get at the scraps.  You only get that “garbage” smell if they manage to get anaerobic.  So, the more air the better.  And a shallow layer of scraps in an open box works well in that regard.

Fourth, it’s tougher to ignore the chore.  Taking out the compost is a chore.  Your instinct is to hide this stuff somewhere, not to have it out where it’s visible.  But with a closed container, it’s out-of-sight, out-of-mind.  And maybe somebody else will take care of it.  It’s far too easy to let the kitchen scraps slip into an SEP field.  By contrast, with an open container, if you’ve got a big pile of scraps waiting to go to the composter, you know it, and there’s no pretending otherwise.

The downside?  We seem to get fruit flies once a year.  I’m never quite sure whether it’s this setup, or the fact that we keep fruit ripening on the kitchen countertop, as shown above.   But I’m willing to blame the composter.  At some point, I may upgrade the system by putting a piece of screen over the top of the cardboard box.  For now, that seems like way too much effort.  So we seem to have to put out a fruit fly trap just about once a summer.

There are a lot of ways you can get rid of your kitchen scraps.  You can simply bury them in your garden.  You can try to work them into whatever outdoor compost pile you maintain.  You can have a dedicated kitchen-waste composter sitting on the ground in your garden.

For me, none of those worked.  To some extent, I had issues with animals being attracted to the food scraps.  But mostly, it was just too much effort per trip.  The ultimate problem wasn’t the equipment, it was the user.  I don’t want to have to pick up a shovel, or even walk all the way to the garden, just to dump my kitchen scraps.  If I do that, I’ll just end up letting those scraps sit around longer.

And so, the general rule is, whatever you do with the scraps outside, you want to make “taking out the compost” as quick and simple and routine as possible.  If possible, no more difficult than taking a bag of trash out of the kitchen and into your trash cans. I bought this tumbling composter (left)  in 2014.  Apparently, it’s a pretty popular model, given the more than 9000 ratings on Amazon.  At the time, I paid what I thought was an outrageous sum for it. Seven years out in the weather, and it still functions perfectly.  And the price seems more reasonable.

Aside from some rust on the screws holding it together, and a somewhat duller finish, it looks much as it did when it came out of the box.  (The brown at the bottom is soil, not rust.)

Mine has ambled around my yard over the years.  It now sits just outside the back porch.  That’s the simplest trip from the kitchen.  So that’s where it stays. Sitting next to that is a trash can full of peat moss.  For every volume of wet (green) kitchen scraps that goes into this composter, you need to add a significant  volume of dry (brown) material.  I tried using various things from the yard — e.g., dried leaves — but it’s just vastly easier and more precise to have a known, easily measured brown material.  I seem to go through a big bale (4 cu ft?) of peat moss every couple of years or so.

The brown material is NOT optional.  If you skip this, or skimp, the material in the composter will turn anerobic and nasty, and will stink.  By contrast, since I went to this system, I’ve never had a problem with odor.  You’d walk right by this composter and have no clue that it’s composting kitchen waste.

Taking out the kitchen scraps consists of carrying that box above, down to the composter.  Stuff the mouth of the plastic bag into the opening of the composter, invert and shake. Add a couple of scoops of peat moss.  Throw the bag away, and, if needed, recycle the box.

Biggest drawback?  It’s not fast enough in cold weather.  That’s why I describe this as a three-season composting system.  In the heat of summer, you go from kitchen scraps to compost in a matter of weeks.  But in the dead of winter, even sitting in full sunlight, this just doesn’t stay warm enough to keep up with the flow of kitchen scraps.

So, for a family of four, where we normally cook from scratch, this is big enough to keep up with the kitchen scraps for about nine months of the year.  And so I compost roughly March through November.  Which, coincidentally, is when I need the compost for my garden.

To me, the the whole kitchen-compost cycle isn’t about the equipment.   Mostly, it’s about knowing yourself.  Give me a way to ignore a chore, and I will.  So I’ve set this up to be hard to ignore, and easy to do.

The entire idea is to force yourself to maintain a constant flow of fresh kitchen scraps out of the house and into the composter.  Size the indoor and outdoor containers accordingly.  And never let those scraps turn anerobic, either in the kitchen container or in the composter itself.

That’s all pretty obvious.  If you’re the sort of person who won’t shirk a chore, I’d guess that pretty much any composting system will do.  But if you’re not, you need to own that, and plan accordingly.