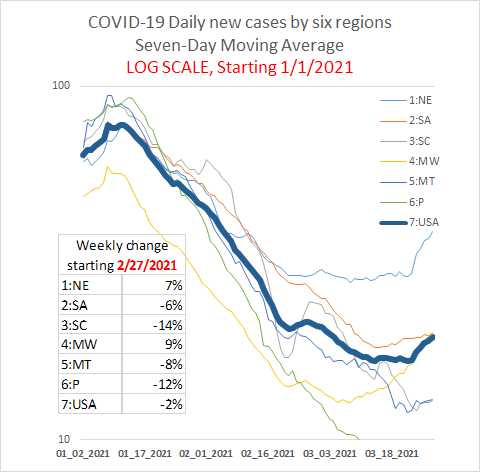 In terms of the trend in new COVID-19 cases, today is much the same as yesterday.  Looks like we’ve entered the U.S. fourth wave of COVID.  U.S. new case counts are now back to 25% of the U.S. third wave peak.  And now it looks like things are starting to accelerate. Trends have turned upward in New York (really, all of the Northeast) and Florida.  Michigan is set to become the state with the highest rate of reported new infections. I don’t think it’s worth creating the six regional graphs as they look pretty much as they did when I posted them yesterday.

Vaccination and self-selection, or why vaccination matters less than the simple count of persons would indicate.

Vaccination continues apace.  In the last two days, the U.S. delivered COVID-19 vaccine at the rate of 3.4 million doses per day.  And the fraction of the elderly who have been vaccinated continues to grow (below, more than 0.6 percentage points per day increase, over the last two days.)

Back in February, I outlined the two reasons why vaccination didn’t much matter, at that time, for stopping the pandemic (Post #1035).  That was for two separate reasons.

First, the classes of individuals being vaccinated first were not, by and large, the individuals who were spreading the disease.  We set about vaccinating all the old people first, in what had become a young person’s pandemic.  Here’s how Virginia looked at the time.  This is infection rates by age (light blue) versus vaccination rates by age (dark blue) as of the end of February. This was a conscious choice by public health officials, and we just have to live with it.  For some smaller subsets of the population (e.g., health care workers, first responders), vaccines were given to people at high risk of contracting the disease.  But the bulk of vaccine so far has gone to the elderly.  Persons age 65 and up account for about 16% of the population but more than half of the fully-vaccinated population.

But there’s a second reason, and I think that’s coming out in the data now:  Self-selection.  Vaccination is voluntary.  Within each eligibility class (e.g., the elderly), the people who are NOT vaccinated may by systematically different from those who are.

And, while I can’t say anything definite yet, it sure looks to me as if this is showing up in the data now.  Whether it’s due to a lack of COVID hygiene, or to frailty, or maybe to their living situation, I can’t say.  But based on some crude back-of-the-envelope analysis, infection rates in the elderly have not dropped in proportion to vaccination rates in the elderly. Source:  U.S. CDC.  The ends of lines are omitted here because they reflect incomplete reporting.

But it only dips a little.

As of the end point of this graph, something like 45% of the 80+ population would have been fully vaccinated, and a further 30% would have had at least one shot.  When I do the math based on the effectiveness of the vaccine (45% x 90% effective + 30% x 55% effective), I estimate that, in effect, by the end of the time period above, the equivalent of 60% of that elderly (purple-line) population should have been immune.  And yet, there’s nothing approaching a 60% reduction in new cases, relative to (say) the nearly-unvaccinated younger population.

And you can spin that either way.  One way to say it is that the elderly who were eager to get vaccinated were the ones who were not spreading disease in the first place.  And so vaccinating a lot of them did very little to the ongoing spread of disease, because they were (e.g.) careful enough not to catch COVID in any case.  And the flip side of that is to say that the elderly who were out-and-about spreading disease are the same ones who won’t (or perhaps can’t?) get vaccinated.

How does this relate to herd immunity?

All of these things — the simple-minded expected impact of vaccine, or the level of vaccination required to end the pandemic — they’re all based on really crude-bordering-on-dumb models of the population.  Effectively, every person is the same, and all persons interact at random.

In effect, the basic model of a herd immunity really and truly is a model of what you’d expect to see in a herd of cattle.  And while there are some more-sophisticated models, pretty much everything you hear about herd immunity is based on the simple “cattle herd” model.

And I’m beginning to think that the simple “cattle herd” model of a pandemic might be seriously misleading, as a model for an actual pandemic among people.

This is pure speculation, I have no hard evidence, but in some sense, the numbers just don’t add up.  When you’re doing the addition based on the simple-minded model of a pandemic.

The only thing I’m fairly certain of is that if we’re vaccinating people who, by and large, wouldn’t have gotten infected anyway, then the overall population level of vaccination required for herd immunity is going to be higher than the simple “cattle herd” model suggests.  The often quoted figure of 70% vaccination rate required for herd immunity assumes that’s a randomly-chosen 70%, and that individuals then interact at random.  That’s the only set of assumptions that results in 70% of the chains of infection being broken.  And, based on the infectiousness of the previously dominant strains, that’s the number you’d need to break to end the pandemic.

In a nutshell, the question is, can that second group — call them the rule breakers — keep the pandemic going despite a high overall average rate of vaccination?  And, just fuzzy-thinking through this, I think the answer is that under the right circumstances, yes they can.  In particular, if rule-abiders tend to interact with rule-abiders, and rule-breakers interact with rule-breakers, you can keep the pandemic going among the rule-breakers even though the average vaccination level in the population suggest that the pandemic should end.

This is tough to model explicitly.  But just take the simplest case where the two populations are completely separated, with no interaction.  In that case, the pandemic will continue until both halves of the population reach herd immunity.

Just to throw some numbers at that simple scenario, if

In any case, here’s my take on this.  I’ve been expecting to see some states hit herd immunity for quite some time now.  And it’s just not happening.  At least, not yet.

At this point, we’ve got states that already had high infection rates in the U.S. third wave, and that now have one dose of vaccine given to nearly 40% of the population and full vaccination given to 25% of the population.  Some of these are states that the CDC says have few or none of the new more-infectious variants. And yet, new COVID-19 case rates are now rising in those states.

Somehow, something about the simple-minded “cattle herd” model really is not right, when applied to the actual U.S. population.  I can’t quite put my finger on it, but I now suspect that the actual path to ending this pandemic is a lot more complicated than just getting adequate average voluntary compliance with COVID hygiene rules and COVID vaccination.