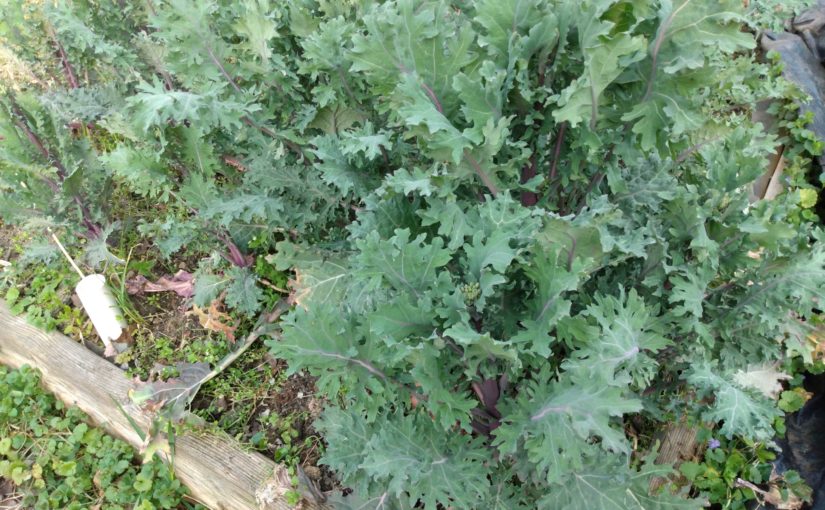 You can read about garden successes anywhere.  This is a post about three garden mistakes. Overwintering 1:  Mustard.   I planted mustard late last year as a deer-unfriendly, pest-unfriendly cover crop.  I was hoping it would flower and go to seed before the cold weather set in, so that I could get some fresh mustard seed out of the deal.  But I planted it too late, and it didn’t flower last year.

To my surprise, a large fraction of it overwintered and is now blooming, here in Zone 7 Vienna, VA.  So the bumblebees are happy, and I may yet be able to have a late-spring harvest of mustard seed.

And I see a lot of mustard in my future.  When I went to buy seed, I said, hey, this is a lot cheaper by the pound.  I wanted to cover my entire garden, so what could it hurt to buy in bulk, right?  At the recommended rate of seeding, I think I used two ounces last year.  So I’m definitely going to have to find room for a mustard bed this year. Overwintering 2:  Kale.  Kale, what a great plant.  Easy to grow.  Nutritional superfood.  Virtually pest-free, in my garden at least.  And tough enough to withstand the winter cold.

What a pity that it tastes like kale.  And that nobody in my household likes it.  So this ended up being a gardening mistake, and I won’t plant it again.  It kept the weeds out of that garden bed.  But nobody cared enough for kale to pick it and strip it down so it could be eaten.

I’ve now pulled all this up, stripped off the leaves, and have a shopping bag full of washed kale in my fridge.  I grew it, so I’m not going to throw it out.  But I’m still searching for a recipe that will make it taste less like, well, kale. A chit load of potatoes.  I started putting potatoes into the ground yesterday, after having “chitted” them, that is, sprouted them a bit by leaving them in a warm, dark place.  That’s not necessary but is said to give them a head start.  The small fingerling potatoes sprouted well, the others did not.  They are all getting planted anyway.

I’m using the “Ruth Stout” method for growing these.   Given the prices I face, these will be value-destroying no-dig potatoes, as described in Post #1073.

This year, I’m doing what many people say not to do, and planting grocery-store potatoes.  So we’ll see how that goes.  You certainly see mixed information on a) whether that will work and b) how risky that is, in terms of potato diseases.

Why am I planting grocery-store potatoes?  Last year, I paid top dollar for mail-order seed potatoes, of which absolutely none sprouted.  After that failure, I bought some potatoes at the farmers’ market and planted them.  And I got what I thought was a good yield, with, for sure, next-to-no effort.

And so, having done it “by the rules” once and had an expensive failure, I figured that if I’m going to fail to grow potatoes, I can at least fail to grow cheap potatoes.  Hence, grocery store potatoes this year.

There are two reasons people say not to use grocery-store potatoes.  One is that they are all treated with anti-sprouting agents, and that by itself may prevent them from growing. So, in theory, there’s a high risk of failure.

But in addition, there is some risk of spreading potato diseases by doing this.  In fact, in states where potatoes are a big commercial crop, it is, as I understand it, illegal to grow potatoes from anything other than certified seed potato.  So it would be literally illegal to plant potatoes from the grocery store (as reported in this source).  Near as I can tell, there is no such law in Virginia.

If there were commercial potato farmers nearby, I don’t think I’d do this.  Or, really if any of my neighbors planted potatoes.  But my little plot is it, in terms of potato crops, for a pretty wide radius around me.  So I think the only risk is my garden soil, should it become infested with viruses that attack potatoes.  At which point, I’ll plant something else.