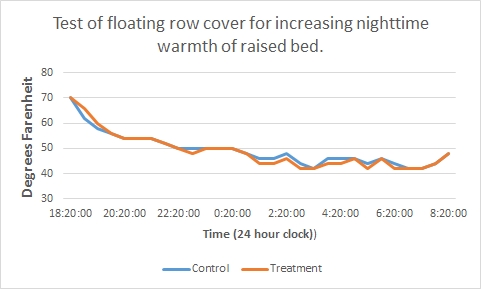 In prior posts, I showed the creation of a core bed (Post #G21-008), and I explained why I planted my summer squash far earlier than is typically prudent (Post #G21-011).

Now I want a simple way to keep that garden bed warmer at night, with a working goal being to keep the air temperature at or above 50 degrees Farenheit.  (Because that’s the temperature where many garden plants cease to grow.)

I’m not really keen on purchasing a greenhouse or even building a poly tunnel, though it may come to that.  That’s not because they don’t work, it’s mostly due to the inevitable operator error.  With any type of clear solar collector, I will forget about it at some point and have a single hot sunny day cook my plants.  So I’ve learned to avoid them.   They work fine.  I don’t.

I don’t really want a small greenhouse anyway.  That’s just another chunk of plastic that has to be stored in the off-season and that is inevitably destined for the landfill.  Further, that’s overkill for this task. What I want is a simple way to raise the nighttime temperature of the bed, by maybe 10 degrees F, for maybe three or four weeks.  At which point, nighttime temperatures should be warm enough on their own.  The plants aren’t going to be large enough to require a greenhouse, by the time I no longer need a greenhouse.

I’ve read that a floating row cover can raise the nighttime temperature of a bed by 4 degrees F.  That is appealing, as I already own a big roll of that.  And unlike clear plastic, there’s no harm done if I forget to take it off in the morning and leave it on the garden bed all day.

But is that folklore or is that science?  That seems a little improbable, doesn’t it?  Floating row cover is about as thin and porous as a fabric can be.  How can that thin, porous row cover hold in that much heat?  I see that 4 degree F figure repeated around the internet, but has anybody actually put that to a controlled test?

I have a pair of temperature data loggers.  (Doesn’t everyone?)  These devices record the temperature every half hour.  That information can then be downloaded to a computer for analysis.  (These are Easylog USB temperature loggers, EL-USB-LITE.) So I did the experiment, as pictured above.  I covered half the bed with floating row cover, carefully sealing the edges.  I left the other half bare.  And I placed two temperature loggers (in baggies) on the bed, in equivalent positions, one under the row cover (treatment), one on the bare bed (control).  The row cover is suspended over the surface of the bed, so it does not directly touch the data logger. It’s folklore.  Or, more precisely, floating row cover had no impact on temperature in this simple experiment.  One layer of very thin floating row cover did nothing to protect the plants from cold.  In the graph above, where the treatment and control temperatures are virtually identical.

That’s not exactly unexpected.  But that’s not what you’ll read on the internet.

So this turns out to be just another example of what I call the main problem with America today.  Everybody has a right to a firmly held and loudly expressed opinion.  Nobody feels even the slightest obligation to know what they’re talking about.

In any case, that’s a total failure.  Next up, I’ll do a little math to see just how much insulation I actually would need.  I suspect that it may be quite hard to keep this wide, flat bed warm at night without actively heating it.