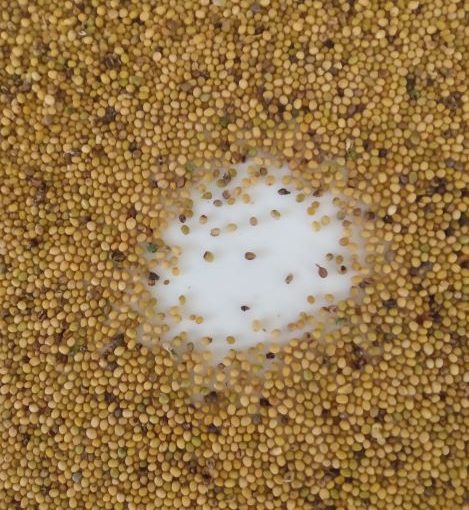 This post is compendium of a few tricks that I’m applying in the garden this year, mostly picked up off the internet, and then a few notes on the state of my garden. Source:  Amazon.   I’ve gotten tired of stooping and turning over every squash leaf, searching for squash bugs / squash bug eggs / squash bug nymphs.  A cheap hardware inspection mirror allows me to see the undersides of the leaves without stooping or handling the squash leaves.  Eggs, nymphs, and bugs are easy to spot against the translucent surface of the leaf. Source:  Home Depot.  Every time I try removing squash bug eggs from my plants, I end up damaging the leaf.  I saw this tip on YouTube and figured it was worth a try.  Press the lint roller against the eggs or nymphs and they come right off the leaf, stuck to the roller.  Peel and discard when done.  I find that this works reasonably well, but not perfectly.  If the eggs are too close to the rib of the leaf, I still have to scrape them off.  On average, well worth using. Source:  Amazon.  I saw this one on YouTube.  Tomatoes have “perfect” flowers, that is, flowers that contain both male and female parts.  The idea is that you can pollinate your tomatoes by shaking pollen from the stamen to the pistil, using the back of the head of a running electric toothbrush.  In theory, this gives you a higher rate of fruit set compared to leaving it up to the bees.  I’m not doing a controlled experiment, so I can’t really say how well it works.  It seems harmless, and I already owned the hardware, so I’m giving it a try.

Finally, I’m noting a few other things here as a way to keep track of events. Source:  U. Kentucky College of Agriculture, Food and Environment.  I still see the occasional cucumber beetle, but just one per day for the past few days.  These days, it’s always a spotted cucumber beetle.  I think this means that the first wave of cucumber beetles has largely passed.  This year, they arrived prior to May 28 (Post #G21-027), and there is still a token presence in the garden as of today, June 17.  I made a second spraying of insecticidal neem at the bases of my cururbits this week, hoping to kill any eggs/larvae that may have been deposited there by the first wave of cucumber beetles. Source:  U Wisconsin Vegetable Entomology.  I have not seen a squash vine borer now for two days.  Looking back at Post #G27, that’s quite different from last year.  Last year, once I saw one, I saw them daily for three weeks, and saw them off-and-on for a further four weeks.  This year, I saw one, killed it, and haven’t (yet) seen another one, despite a lot of time around the garden in the past few days.  Perhaps last year was an anomaly. I have given up on my “bee-proof” cucumber beetle traps, for now.  The original version, based on a commercial sticky trap, did not work (Post #G21-032).  A revised version, pictured here, is a yellow bowl of soapy water, covered with the bee-proof 1/8″ mesh screening.  This also did not work, despite baiting it with cucumber flowers.  Now there aren’t enough cucumber beetles in the garden to give it a test, anyway.  I may try yet another version when the cucumber beetles return. Summer squash makes an excellent lacto-fermented pickle.  I put this jar up yesterday.  If you have more squash than you can eat right now, you might give that a try.  Slice it into spears, then ferment as you would any other vegetable.   That is, submerge it in brine and let it sit.  These stay much crisper than cucumber pickles.

Here’s a table of proportions for making up a pickling brine, calculated from the base recipe in the U.S.D.A. Complete Guide to Home Canning.  I always have to start by recalling that it’s a cup of salt per gallon, and half as much vinegar.  I find that a quart of brine works out just right for the half-gallon container pictured above. I planted mustard as a cover crop last year.  Some of it overwintered and bloomed in the early spring, as pictured.  I’ve let that go to seed, figuring to collect the seed and make my own mustard.

After all, the internet tells me it’s quick and easy!  After carefully following the directions from several internet sources, I harvested some, crushed the seed pods, and tediously winnowed the results.

On YouTube the results always turnout beautifully.  You get a camera shot of a bowl full of perfect yellow mustard seeds.  But in real life, it’s not so easy.  What I got was a bowl of mostly yellow mustard.  But with enough green, unripe seeds and the black, dead seeds that I’m not sure it’s worth trying to turn those into mustard. And as near as I can tell, there is no way to separate the good, yellow seed from the rest of it, short of using tweezers.  So I’m tossing this batch and I’ll see if it works better when I harvest the rest of it. In the early spring I converted one of my raised beds to a “core bed”.  I buried a thick “core” of straw in the middle of it.  The idea is that this will retains water and act like a self-watering planter, reducing or eliminating the need to water that bed.  You can see the construction in Post #G21-008.

And, sure enough, the soil in that bed has remained moist.  But, thanks to the astounding amount of rain we’ve had of late, so has the soil in all my raised beds.  The last two thunderstorm systems that came though dumped 4.5″ of rain based on my garden rain gauge, though the official totals at Dulles airport show less than 3″ total.

It has not been an unusually wet year in this area..  Dulles Airport reports a total of just 15″ of rain through June 15, 2021.  Our average for the first half of the year is closer to 20″ (per this reference).  The upshot is that the total precipitation is well within the range of normal variation.  If anything, it’s been a bit dryer than usual.  That said, for whatever reason, I haven’t had much occasion to water my garden this year.  That goes for the core bed and the other beds as well.