Alaska reported one day of low new case count data, enough to put a pause on its upward trajectory.  As noted yesterday, if Alaska isn’t at or very near its peak, it will soon go into uncharted territory for the US pandemic. Data source for this and other graphs of new case counts:  Calculated from The New York Times. (2021). Coronavirus (Covid-19) Data in the United States. Retrieved 9/29/2021, from https://github.com/nytimes/covid-19-data.”  The NY Times U.S. tracking page may be found at https://www.nytimes.com/interactive/2020/us/coronavirus-us-cases.html.

It appears increasingly likely that there is now significant rationing of inpatient care in Alaska.  It’s hard to dismiss the downturn in admissions as a mere statistical fluke.   That’s Alaska, as of two days ago, in the graph below. I spent my career as a health economist, and I never thought I would see this in the U.S.   But the plain reading of the graph above — as well as news reporting from that state — says that’s true.

Based on news reporting, Anchorage (where 40% of Alaskans live) ran out of ICU beds on 9/14/2021.   The peak of the new-hospitalization curve above is 9/12/2021.  As of today, Alaska as a whole still has 22 open ICU beds.  But that doesn’t help much in a state where it’s extremely difficult to transport patients from one region to another.

For the U.S., where this heads next is not clear.  But I’m going to give you my best guess as to how this is shaping up.  None of this will be unexpected if you’ve been reading along.

By eye, it appears that the declining phase of the Delta wave is beginning to stall.  As of today, 10 states saw increases in new cases over the past seven days, up from just six states yesterday. I can look even farther north and I think I see another indicator in Canada.  If you look closely at the Canadian Delta wave, it appears to have peaked just a week or two ago, circa 9/17/2021.  But if you look closely, you’ll see that it wasn’t much of a peak, and that new case counts have begin creeping upward again. And so, as with projecting the date peak of the Delta wave (Post #1211, August 13, 2021), it boils down to art class.  Sketch in the curve for the weeks ahead, and judge which sketch seems most natural or plausible, given what you’ve seen of the pandemic so far.

Each of the three graphs below shows the first and second years of the pandemic, and then a projection for the rest of the second year, in green.

First, there’s the projection from an ensemble of models that has been funded by the U.S. CDC.  Their claim is that the pandemic is all-but-over, and that cases will fall steadily from now into the new year.  My guess is that, if nothing else, the current experience of Canada casts some doubt on that one. Up next is a variation of the crude sketch I did some time back.  There, a downsloping Delta wave continues until it crashes into the coming winter wave.  That sort of sharp turnaround seems implausible.  That’s an either/or combination of the two waves, and that’s not really how the world works. Here’s the sketch that I favor.  In reality, what we’ll probably see is the sum of the two waves.  Cases will continue to fade out in the South, cases will begin rising in the north (and, based on last year, particularly in the norther Plains states).  And what you end up with is a curve that is the sum of those two effects. If that one’s true, we should see the Delta wave bottom out in the next couple of weeks.  As drawn, the bottom is October 7, or eight days from now.  But that’s just a guess.  The more important point is that if this is the most likely sketch of the new future, we aren’t going to have to wait more than a couple of weeks to find out.

Finally, let me emphasize that I’m not fear-mongering.  I’m just trying to get my best projection of what I should reasonably expect next.  And as of today, my projection is that the winter wave will start in the next couple of weeks.

Not as un-scientific as it looks.

That curve above isn’t exactly science, but it’s not exactly not science, either.  Let me lay out the argument as simply as possible.

First, something happened last winter that greatly increased the efficiency with which COVID-19 spread.  Whatever it was, that happened across virtually all developed nations in the Northern Hemisphere.  The only thing all those countries had in common was winter.  And so, assuming it was somehow related to the conditions that prevail in Northern Hemisphere winter, whatever it was that amped up viral transmission, it will surely return as we move back into winter.

Second, we’re about where we were at the start of last winter, in terms of the balance between infectiousness of COVID-19 and immunity in the population.  Right now, the “R-effective” — the ability of COVID-19 to spread — is about where it was last year.  Or, at least, that’s my calculation.

So that’s the argument.  Clearly, something about winter helps COVID-19 to spread.  (My guess is that it’s primarily low indoor relative humidity, but I’ve said that too many times already.)  Less clearly, we’re about where we were last winter, in terms of the balance between infectiousness of the disease and resistance to the disease.

My conclusion, then, is that we’ll have some variation on a repeat of last year’s winter wave.  Until such point as so many people have been infected, and so many people vaccinated, that we finally reach some version of herd immunity.

It’s a bad-news/good-news situation.  Bad news is, I’m pretty sure we’re going to have a winter wave.  Good news, I’d bet this is the last wave we’ll have.  The disease will remain in circulation, but by the end of the year’s winter wave, the non-immune population should be small enough that COVID-19 will no longer be able to “catch” and cause these huge upswings in cases any more.

The whole trick will be avoiding ending up like Alaska as the final round of this plays out.  For my part, I’m surely going to get a vaccine booster as soon as I am able (even though I think the evidence warranting that is thin).  And the flu shot. I’m wearing N95s in all public indoor places.

What’s safe to do during summer’s Covid surge? STAT asked public health experts about their own plans, by Helen Branswell, August 17, 2021 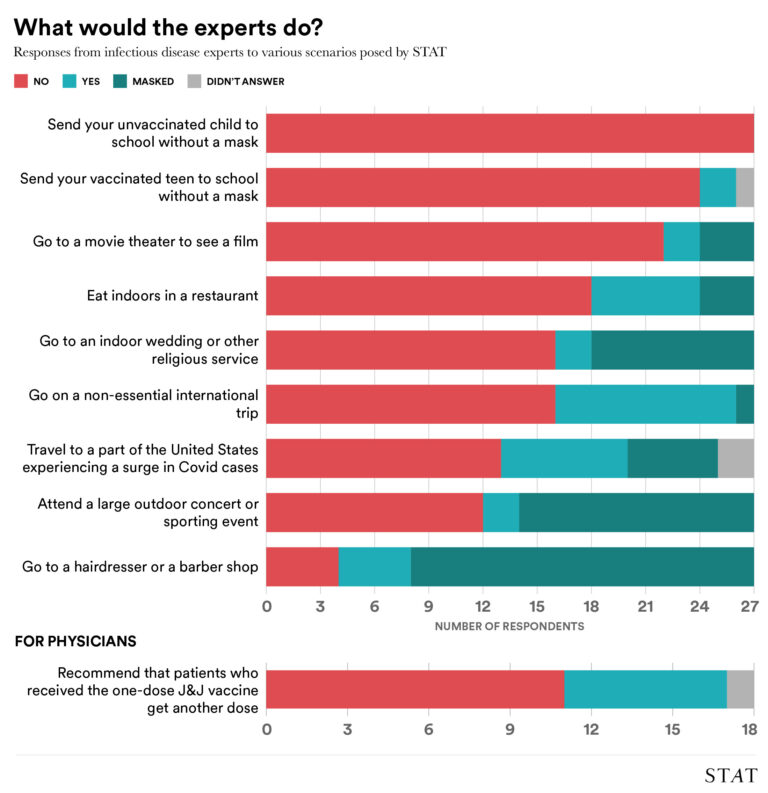 Source:  Statnews.com, citation given above.