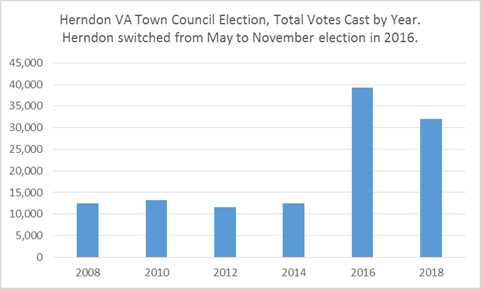 In Post #340, August 2019, I made the case for moving the Town of Vienna elections to November, to coincide with the general election.  If you think that voter participation is a good thing, all you had to so is look to the well-run Town of Herndon to see what happened to voter participation when they did that (above).

May Town elections in Virginia are an anachronism.   Increasingly, Towns in Virginia have done what Herndon did in 2016 and moved their elections to coincide with the general election in November.  There’s a section of the Code of Virginia that outlines how a Town may do that.  As of 2019, there were just slightly more Virginia Towns with a May Town election date than a November date.

The Town of Vienna couldn’t be bothered to change the election date, though I believe the previous Mayor at least raised the issue.  But now, the Virginia Legislature decided to change if for them.  Both houses of the legislature passed bills to move all Virginia elections to the November general election day.  The bill has not yet been signed by Governor Northam, but he is expected to sign it.

Weirdly — well, at least weirdly to me — this prompted our own little version of the vote suppression craze that has swept the Republican party.  Nobody disagreed that we’d get more voter participation if the elections were moved to November.  Nobody could even think of a reason to cry “election fraud”.  And yet, every Republican in both chambers voted against it, every Democrat voted for it.

This is probably the first time that I was glad I paid attention when the Town Attorney talked about Virginia as a Dillon Rule state.  In this case, it means that the Commonwealth has an unquestionable right to set the election dates for localities.

The upshot is that this may be the last-ever May election in the Town of Vienna.  That’s not totally guaranteed.  For example, if Republicans gain control of both houses, they can switch it back to May, I guess.  But my expectation is that if the Governor signs the bill, and we align all local election dates with the general election, it will probably stay that way.

And this year, our Town election is almost-but-not quite the traditional Soviet-style snoozer that typifies Vienna town elections.  Three seats, three incumbents.  Meet the new boss, same as the old boss.  The only twist in this year’s election is that there’s a fourth candidate, David Patariu (currently on the Planning Commission), in addition to the incumbents.  So it’s not quite a question of voting “Da” for the approved candidates.  You actually have a choice, and so, you have a reason to vote.

If you want to vote by mail, you can request a ballot via a straightforward on-line process accessed on the Commonwealth of Virginia website.  You’ll need your Virginia driver’s license number (Customer Number) and your SSN.  (And a phone number and email address.)  Your “locality” for voting purposes is Fairfax County.  If you don’t want to or can’t use the on-line form, you can also ask for a paper-copy form to fill out and mail back to ask for a mail-in ballot.

In fact, you can sign up once for mail-in ballots for all the remaining elections this year.  (Which would be two, plus maybe a primary, for TOV residents, I think?)  Which I duly did.

Anyway, enjoy it while you can.  In all likelihood, this may be the last May election in Vienna.  For reasons I don’t fully grasp, the decision to move the elections to November devolved into another one of those us-versus-them partisan issues.  But I guess if Herndon survived it, we will too.

In fairness, even though I think this is obviously a beneficial and much-needed change, it’s not as if other states don’t hold Town elections on odd dates.  Just look at Maryland to see that they have elections somewhere in that state in every month of the year.  So it’s not as if you have to coordinate elections.  But it certainly increases voting in local elections if you do.

One final footnote is that the change in election dates adds about half-a-year to the terms of whatever Town Council members are incumbent at the time of the switch.  In hindsight, assuming the Governor signs the bill, you actually elected them for longer than you thought you did.